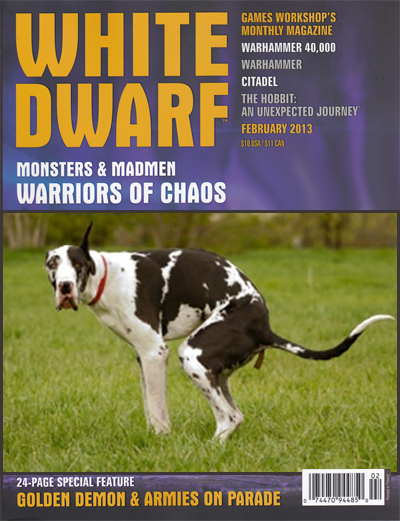 So the new GW magazines hit the shelves over the weekend, and from what I can tell, most of them are still sitting there. But let’s go from the start…


White Dwarf, that staple part of the Games Workshop hobby that first began in 1977, is gone. After 37 years of bringing us Games Workshop’s new releases latest news, the ole’ dog was sent to the retirement home. Wow. Instead, we’ve got two magazines. A cheaper and thinner White Dwarf Weekly, and a more expensive and thicker Warhammer: Visions.

White Dwarf Weekly brings the usual catalogue of new releases to browse over, with close up photos and ridiculous fancy words to describe them. Once again, you get the impression that the writers spend too much time with a Thesaurus when we can already see what we need to know. However, it does mean releases will be a weekly thing these days, so each month will probably have something for every gaming system. After that, you’ve got the usual White Dwarf treatment, with Jervis Johnson, Paint Splatter, discussions with the design team etc. It’s like a lean version of the old White Dwarf crammed into 30 pages. 30 pages? That's so lean it would make George Foreman proud. Considering 10 pages are new releases, I’m already thinking what’s the point if I have no interest in Dwarves?!

So, Warhammer: Visions. It’s marketed as a ‘visual extravaganza’ that's ‘packed from cover to cover’ with parts of the old White Dwarf that were really great. Blanchitsu, Kit Bash, Parade Ground, Golden Demons etc. Again, a price hike up to £7.50. At first-hand this seems way too much for a magazine, but GW say its more of a coffee-table collectors kind of book, so it might be worth it... Well it isn’t. 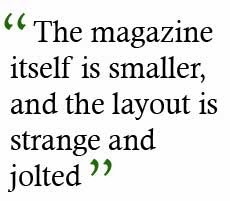 The magazine itself is smaller, and the layout is strange and jolted. Already, this makes it fall down as a collectors type flick-through book. Then the content. Endless, recycled photos of Tyranids. I can find these photos on the GW web page, on the internet, or the Codex. If I was a Tyranid player, I'd be buying the models anyway, so why would I need a visual companion when I can hold the real thing? If I’m not a Tyranid player, why would I want endless photos of them? Plus, it comes to a point where these battle shot type photos become stale. There are loads of examples of Citadel miniatures in existing larger publications like Codexes and expansions. So the reality is, it's nothing exciting and new.

This leaves the remaining sections like the Golden Demons, Blanchitsu, Parade Ground etc. As the pages are smaller, I'm getting less on a page, plus there’s hardly any text. There is no discussion about the content, just a brief overview of what I’m looking at in different languages. The battle report sums this up perfectly. It’s a few pages with no detailed content or description. There’s literally no point in it whatsoever. The previous battle reports from the regular White Dwarf were slightly short in the detail department, but this thing? No idea.

All in all the new White Dwarf magazines are a massive let down. A combined monthly total of £17.10 for less quality material than the previous White Dwarf, yet more than 3 times the price.

Change is a strange thing. It’s usually met with skepticism and cynicism, but on this occasion, I think that’s justified. We have come to expect quality content from Games Workshop, particularly as they charge a small fortune, but the reality is they’ve fallen short here. Warhammer: Visions just isn’t as good as they say it is, and I can’t see why anyone would want to buy White Dwarf Weekly unless the week’s releases speak directly to them. Time will tell the fallout of this, but for now, these new magazines are going to have a shaky few months.

It would be great to get the community's thoughts on this, so if you have an opinion, leave a comment and get the discussion going.
By Elliot