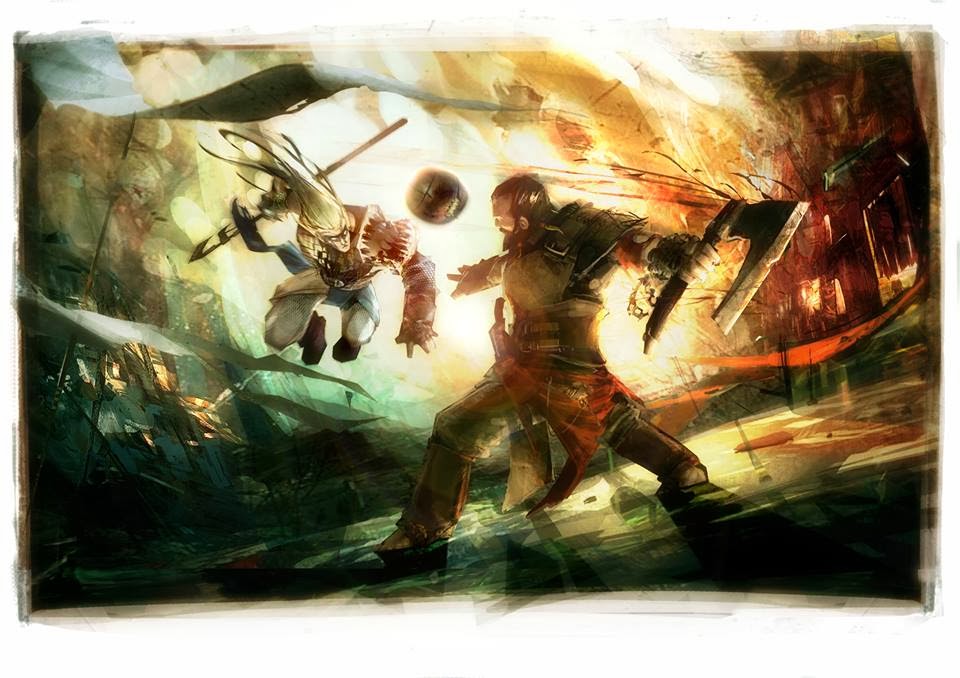 Good evening wargamers, By now, most of you will have probably heard of a game called Guild Ball that recently came to kickstarter. Well, if not, head over to the kickstarter and check it out.

We got a chance to sit down with one of the creators: Richard Loxam, and pick his brain about the game for you all:


IR: Hi Richard, thank you for taking the time to talk to us today, why don't you kick us off (pun very much intended) by telling us a little about what Guild Ball is?

RL: Sure, Guild Ball is a medieval football tabletop wargame, set in a pseudo historical world with strong European flavors. It is incredibly simple to pick up and learn, yet has all the depth and intricate design elements that make it such an engaging and fun experience/ One that makes you want to come back for more.

IR: Obviously, whenever most people hear about a tabletop game that involves a ball, their thoughts inevitably go to Blood Bowl. It's sort of the elephant in the room with games like this. How is Guild Ball different to Blood Bowl?

RL: Guild Ball is played on a 3x3 tabletop, not a board. Being free of a board allows for a vastly more expansive game. It is more of a skirmish style experience overall and players of football games have found it very 'freeing' to experience the style we have chosen.

IR: Playing a game like this, free of the average board with squares or hexes is a very interesting approach, what made you decide to get rid of the "board"?

RL: Our original idea was to take it out of the board arena. Part of our reasoning was to free players to focus on a more flexible position model. The board felt far too "black and white" in its approach and we wanted Guild Ball to operate in the "grey" area.

IR: So without the constraints of the conventional board, terrain can come into play. I know you've mentioned on the kickstarter that terrain will be a part of the game, but how interactive/important will terrain be in Guild ball?

RL: Terrain is massive. Terrain affects how the game plays and actually affects the momentum system. Imagine that if you shoot from a nice open hill, you gain extra momentum to help you. Conversely, if you're stuck in a rough patch of terrain, it will actually cost you more momentum to attempt the action. 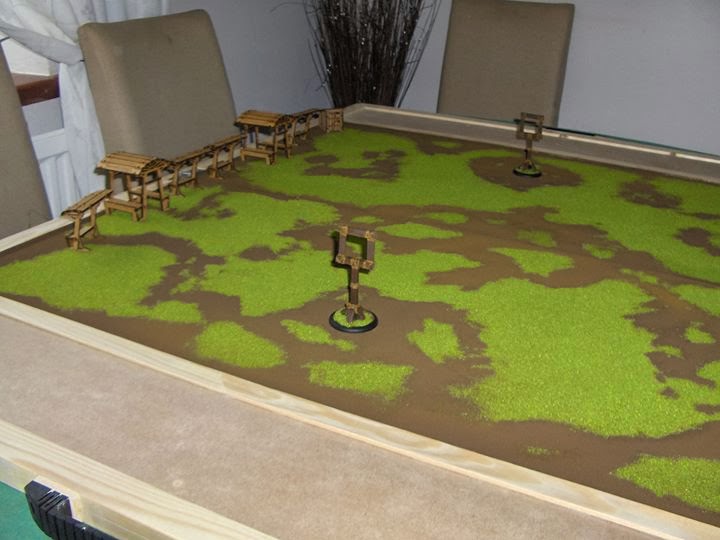 IR: Guild ball certainly seems like one of the more unique and different sports games to emerge in the last few years. How did you come up with the concept for the game and the world?

RL: We felt that football (soccer) has been neglected in its representation within the wargame community for quite some time. It is one of the most popular games on the planet, yet there was nothing really about it in miniatures form. Coming from the UK, medieval football was a very cool concept and lends itself well to miniature gaming. Throw in some fantastic art by Doug Telford. a huge dash f story and setting and we have a gritty, realistic world that is raw and unrelenting in nature.

IR: You're right it's usually American football that gets chosen as the basis for sports wargames. It probably has something to do with the inherent violence of the sport. Can we expect Guild ball to scratch our violence itch? 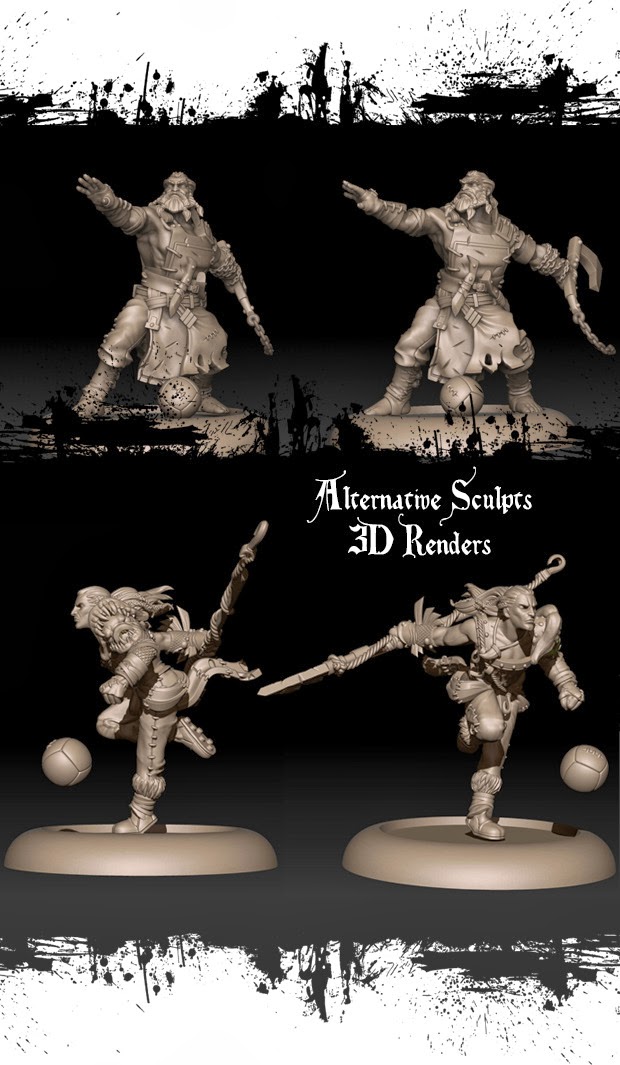 IR: Excellent! Speaking of the players, talk to us a little bit about the factions in Guild Ball. Who are they and what has brought them to the game?

RL: We have a vast variety of guilds. The ones we currently have previewed are: The Butchers - Hard working meat cleaver wielding and aggressive. They have a hit first, ask questions later approach to their play style. And they deal a ton of damage out to the opposing team. at times I think they forget they are playing football. . . 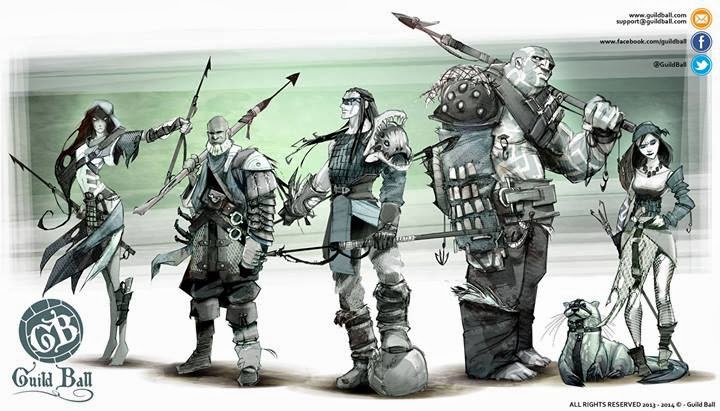 The Fishermen - Coastal based controllers of the ports. They do a lot of trade and are constantly at war with the Butchers over supplying the wealthy and masses with their goods. They are fast and nimble, with a touch of fragility about them. They always get a shot on goal. 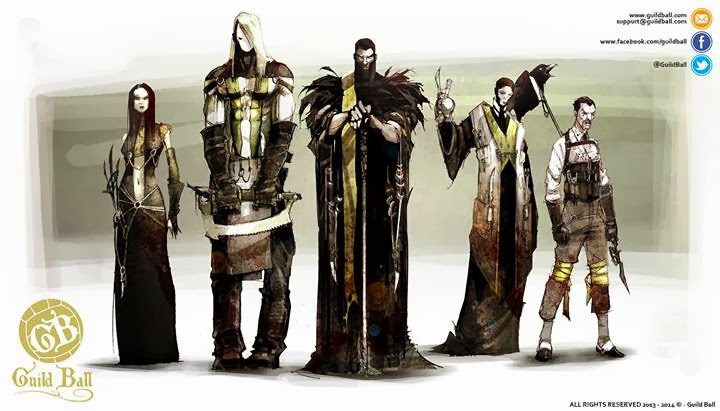 The Morticians - Death is inevitable. The Morticians know this and thrive on the great business it builds. Secluded in style, they bring unique and almost unnatural talents to the Guild Ball pitch. Think of them as the puppet masters - able to control the ebb and flow of the game, while destroying the momentum of the other teams. 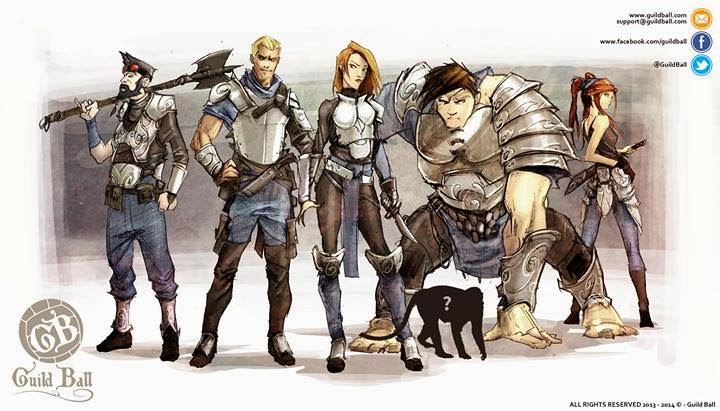 And finally, the Masons - Noble, proud and honest. These guys have a history of creating vast stone halls and works of art that have shaped the Empire cities. This is reflected in their play style - bound together; synergy is huge with them.

IR: I think I like the sound of the Morticians the most. Puppet mastery and dirty dealings is my kind of game. Will there be mechanics in place to effect the game off the pitch, through sponsors, nefarious deeds and back alley deals?

RL: We have plans for how sponsors work, giving teams new equipment, etc. We also have two approaches to playing the game. Standard, strict tournament play and variations on the model that allow for fun style and campaign tournaments. Think adding weather effects, character progression between rounds and story impact.

IR: Weather effects sounds like an interesting element to the game. One one of the biggest draws about sports games such as this, is league play. I assume from your comments that you will be supporting league play? And will players be able to craft their own "dream team" with players from multiple guilds?

RL: We have big plans for dream play.

A lot of it depends on if we hit our stretch goals or not. We would love to have an option post £100k for adding a proper, campaign style expansion with customisable models led by the guild star players you currently see.

Apart from this, the core rules will come with some simple, league based play rules to keep you going. Multiple guild dream teams is an interesting one and may find its way into the tournament rule "add on" options for crazy gaming. 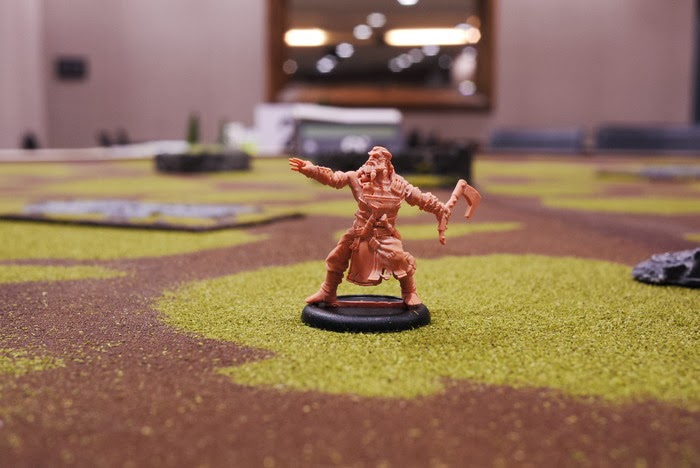 IR: Good to hear, we're all about the crazy teams.

I'd love to field a Mortician Captain, some Fisherman strikers and Butcher defense.

Are there plans for more factions beyond those on the kickstarter? And will we see the option to hire "mercenary" players and MVPs to play for any faction?

RL: The "mercenary" force is part of the stretch goals that you get most of it free!

The the moment they are called Free Agents, but that will probably change in the future. They play for triple guilds (so, for example, Butchers/Fishermen/Free Agents.)

We also have two guilds planned soon - the Brewers guild and the Alchemists guild.

IR: Speaking of stretch goals, let's finish off by talking about kickstarter. What made you choose to bring Guild Ball to market via kickstarter?

RL: Mat and I have invested money into Guild Ball to get it where it is today. Unfortunately, due to the nature of miniature gaming, it would be incredibly difficult and financially dangerous for us to fund everything ourselves.

It's excellent at helping indie game designers become a real thing. Thankfully, Guild Ball will now be a real game, in the shops and with people playing it. And that's pretty awesome! 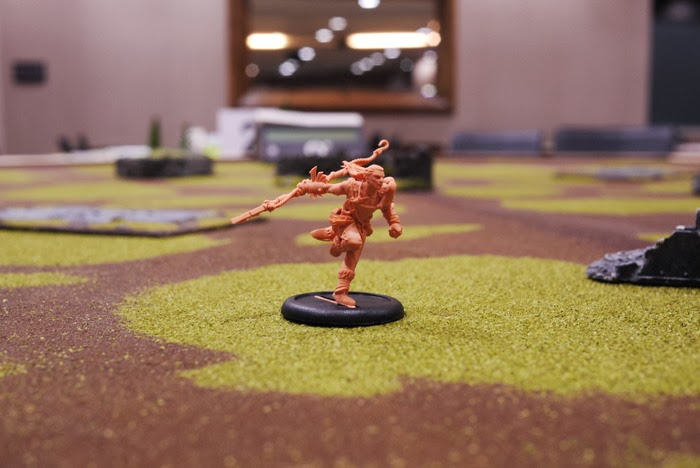 IR: It is pretty awesome. There are some who say that kickstarter is doing negative things to our hobby and being abused. What do you think kickstarter has done for our hobby, and where do you see it going as a result of kickstarter (if anywhere)?

RL: Kickstarter has had a major impact on our hobby, that's for sure -both good and bad. There are several companies out there that have used it as a "pre sale" site for their products. along with driving prices down and offering huge deals due to their scales of operation.

On the flip side, people like Kingdom Death and ourselves would not really be on the market if not for kickstarter - that can only be a good thing right?

At this point, I don't think anyone could argue that your campaign hasn't been a success, but how did you prepare for the launch of the kickstarter? And how has the success you've already achieved affected you?

RL: We did a lot of work with our social media outlets and made sure our production quality on everything we do represents the same standards as our preview product. People appreciate quality and I think that is why we have done so well already.

It's had a big impact on us; we are pretty much in shock at the moments and trying to speed up a lot of plans that we just did not think would happen so quickly. That said, it's a great ride and we are loving every second of it.

IR: It has been great. To achieve so much funding so quickly with only those two initial sculpts shown is a testament to the quality of the product so far.

And it's clear through your use of 3D sculpting and casting material choices, that you really are dedicated to delivering a quality product.

Well, we wish you all the best with the rest of the campaign and look forward to seeing what else comes along for Guild Ball.

Thanks very much, Richard.


Well, there you have it folks. The Guild Ball kickstarter is shaping up to be a really great campaign for what looks like an excellent game.

If you want to pledge your support, then head over to the kickstarter.

You can also follow Guild Ball on social media:

Let us know what you think of the game so far in the comments!