In 40k 6th having a good grasp of objective placement is the key to winning more games and knowing where to place them upon the battlefield is paramount to your success at holding them and ultimately winning the game.

Now, I'm not saying that I'm going to give you the be-all and end-all guide to placing objectives, but hopefully this guide will help some of you think about how you place yours in your future games.


So, let us begin. Figure 1 is an example of a typical 6'x4'battlefield . It has a ruin in each corner quadrant, one in the centre and  a few hills/scatter/area terrain.

For this objective placement guide we're going to be focusing on the Dawn of War deployment, if you take a look at the diagram you'll see both deployment zones marked by the green overlay. Despite using Dawn of War as an example you should be able to put the following principles into action for boh Hammer and Anvil and Vanguard Strike.

In the following example, we'll talk about both players having a single objective to place. When given a single objective each 40k generals usually gravitate towards placing their objective into a piece of hard area terrain within their deployment area. They then plan their focus strategy around castling up. 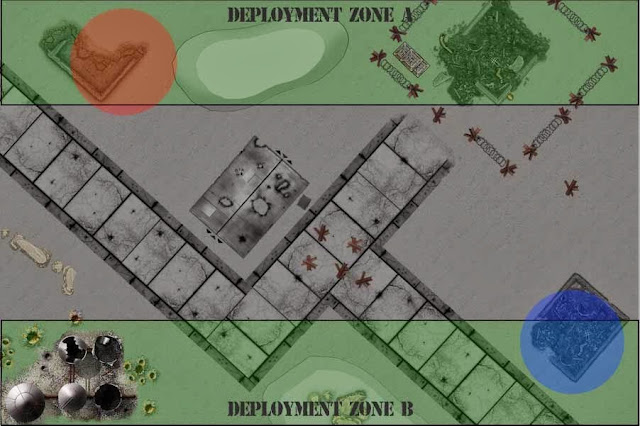 Before I go any further, I should point out that the objectives on the diagram are the solid, coloured circles. The circles are the 12" zones around the objective where you can't place any other objectives. This "control zone" (as I like to call it) is actually a powerful tool that you must learn to harness to give you the upper hand in the game.

Right, back to the guide. As I said, when presented with a 2 objective game, most players tend to castle up in their deployment zone as above and castling up generally turns into a game won by the player who gets First Blood and/or Slay The Warlord. This is of course unless one player decides to grow a pair and launch an assault to clear out the unit claiming the opposite objective or contest it. Either way, it's not a very exciting game with an inevitable outcome. Yawn!

The other issue with castling up is the potential to give away an easy secondary in Line Breaker. Think about it, if you place your one and only primary objective in your deployment zone, and your opponent decides to go for it to either claim or contest, you're basically inviting them to get Line Breaker, feasibly handing them the win on a plate through minimal effort on their part.

To try to mitigate this, don't place your objective in your deployment zone. Try placing it in the midzone, just outside your deployment zone as shown below. This still gives you the choice to castle up nearby in cover and then go for the last turn claim but also negate the Line Breaker threat somewhat. I know what you're thinking, "I'd still go for Line Breaker, it's easy!", but be honest with yourself, when playing how often do you get tunnel vision for the primary objectives and the killy secondaries and forget about Line Breaker? Psychological tactics you see. If you get tunnel vision, what are the odds your oppo does too? 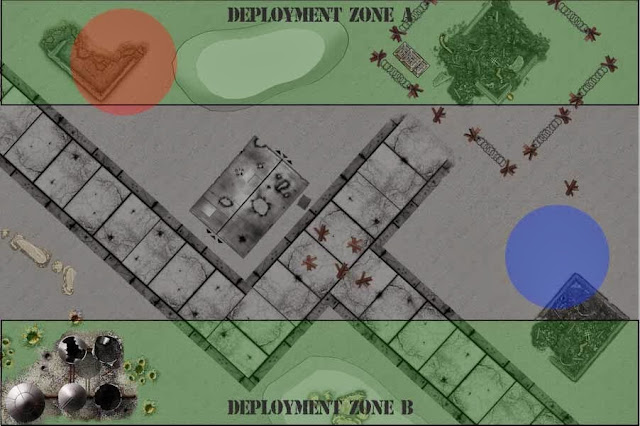 Things get a little more interesting when you've got more than 1 objective each to deal with, and this is where things start to get tactical. That's what we're going to look at in this example.

Ideally, obviously you want to place first as then you are in complete control of where your oppo needs to go. This is where the "control zones" come in. These are actually used as cover denial believe it or not. I'll demonstrate below: 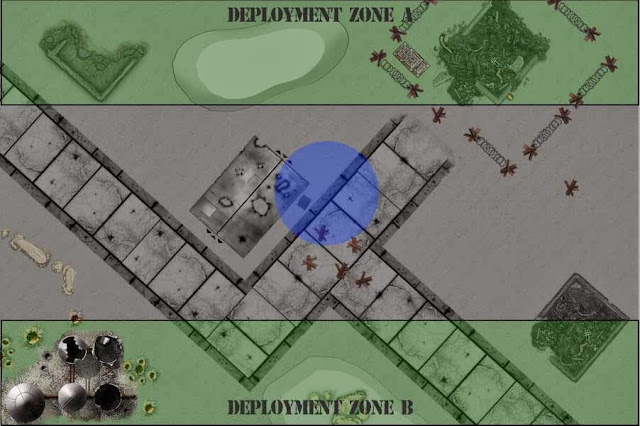 Player B wins the roll off for objective placement and places their first objective in the midzone. Note how the placement means that the control zone extends into the central ruin. This serves 2 purposes. Firstly, there is no way that Player A can now legally place their objective within the ruin, denying them the option of deploying scoring infiltrators straight into hard cover on an objective within the midzone. Secondly, the actual location of the objective marker in Player A's half is enticing. If he takes the bait, it forces him to place his unit in the open if he wishes to claim it, leaving it vulnerable to shooting attacks (get those big guns ready!) and easy to assault if necessary. However, fight the urge to claim this objective yourself early in the game as it leaves you open to the possibility of receiving an asskicking in the same vein as you were hoping to deliver, unless you have some hard as nails scoring unit you can stick on there such as wraithguard etc.

Next up, Player A gets to place his objective. Let's assume he wants to play it safe and keep a home objective to give him a bit of security. The table now looks like this: 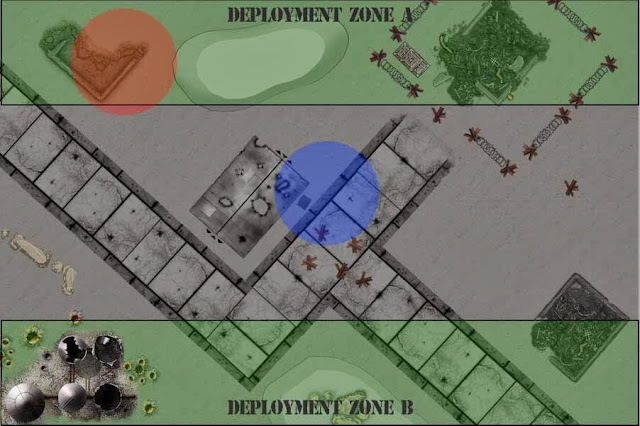 Player B then gets to place the final objective. Now this is the kicker as the final location is really dependent on the type of army you have. If it's a fast army then the final location should be in your oppo's deployment zone to give you Line Breaker if you get there. If it's a slower army then it should be in the midzone to prevent your oppo getting Line Breaker. Lets assume Player B is an Eldar player (like me!) and has a load of jetbikes in his army. So he places his final objective like so: 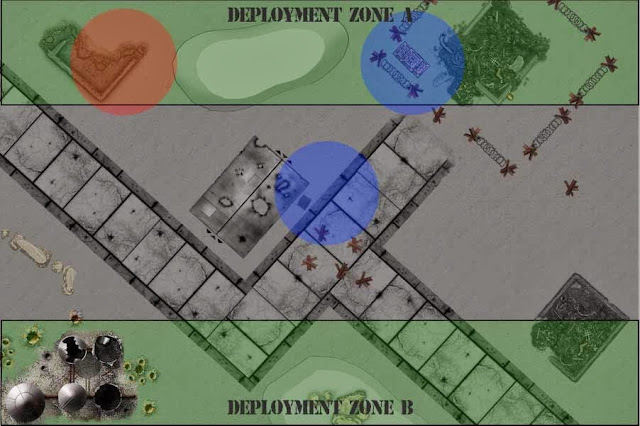 This final placement again forces Player A to claim the objective while out in the open and exposed to attack. This kind of layout allows Player B to corral Player A's forces and effectively control the movement of Player A's army and hopefully pick it apart and leave Player B to move onto the objectives at his leisure.

Now, as I said before, this isn't the be-all and end-all guide but hopefully it's been of some use. Just remember, it's not an unbeatable system and Lady Luck will always do her best to screw over your best laid plans but don't forget, fortune favours the brave!