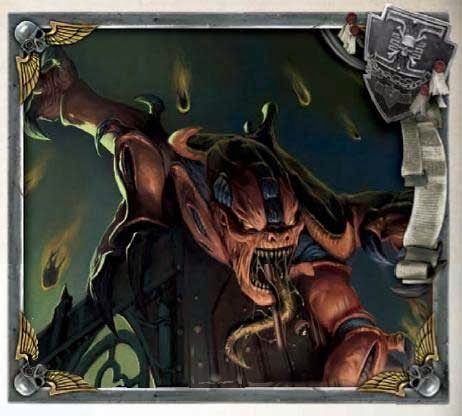 Plenty of new stuff to keep you wondering today with the added benefit of mutually supportive rumours. It's not often we get rumors that land together and back one another up so in light of that I'm inclined to think these may be trumors.

Anyways, what are they?


Ymgarl Genestealers‏ have been removed in 6th codex. Now just have a fluff piece on the genestealer page. However they my appear in the vanguard dataslate, as the front cover looks to be either a lictor an ymgarl


Not sure who provided Gary with the following but the signs are once again pointing towards a standalone Stealer Cult supplement. It seems standard Genestealers are being toned down - likely paving the way for the top spec turbo Ymgarl variants. Maybe...


Hello Nafka, saw the Tyranid rumors posted up and noted it's missing one.

A chap at my FLGS was trying to make out some of the small images of the Tyranid Codex pages printed in this month's White Dwarf. Among them was a points increase for Ripper Swarms (at 39pts a piece, making them 9pts more expensive than previous), but what I remember most strongly from yesterday was the changes made to Genestealers.

Long story short, the 'Stealers have lost their ability to Outflank, but have Infiltrate instead (as they used to do before 4th Edition), keep their Fleet and (my memory is a little sketchy on this last one, so take with salt) can be upgraded to Mastery Level 1 for an undetermined amount of points (my best guess is that this is used to represent the Broodlord/Patriarch).

More Guard stuff from the an old playtest sheet. It's time I update the Imperial Guard Rumors 2014 page.


Regarding the Leman Russ:
Vehicles & Ordnance Weapons: Unlike other units, vehicles can move and fire with Ordnance weapons, but can only make Snap Shots with its other weapons that turn.
A vehicle that remained Stationary can fire all of its weapons, including Ordnance weapons.

An interesting note:
Ignore cover USR: the target receives -2 on it's cover save. Template weapons ignore all cover saves.
Vehicles ignore the "Gets hot" USR.


Forgeworld Hitting Shelves Near You?

GW rumor legend and Natfka inbox pest "Tim"has alluded to Forgeworld stocks hitting certain GW stores. I'm inclined to believe this one - what with Black Library merging with the GW store and the trend to get BIGGER (and more expensive). We'll know in March anyway.


Regarding Forgeworld Products being sold at GW stores
Several GW Stores in Europe & US confirmed the orderability of FW via shops from march.
Every customer should then be able to order via the Online Shop or Store Archive Service for Products.


Tying in with(?) and strengthening our belief in the latter Tim Tidbit comes the  following.

via an anonymous source here on Faeit 212


1) Forge World/Games Workshop Ltd is in Texas looking for a distribution warehouse.  There was talk about limited production capacity as well.
2) Forge World/Black Library/Games Workshop merger is still "in the works" as you have mentioned or been kept up on.
3) Look for some plastic kits being pulled from shelves in GW retail stores starting February.  I dont think any are scheduled for discontinue, they are just being moved to direct sales only.  Likely starting with Tyranids, as February they go into the shelf proper from New Release section.  Looks like the various 'gaunts boxes will be first to be pulled.