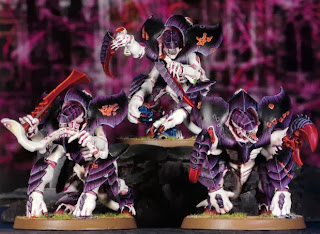 Got a lot of stuff today in terms of rumors, first up we have the first batch of rule confirmations for the new Tyranid Codex, then we have a few murmurings regarding the new Imperial Guard stuff, including something that says that GW will push more towards pushfit models to give Horde Armies an easier time,  and finally Lord of Wars becoming official parts of Codices, another FW and GW site merging rumor and Forge World taking over Finecast production(which is also something that has been mentioned before in previous rumors). Remember to take all rumors with a serving of salt.

Force org slots based on kits

Red terror is included in the codex itself (images at least)!

via a must remain anonymous source on Faeit 212

The team really likes hull points as they are right now

As for Hull Points and the differences between vehicles, the Russ is getting an update to make it more durable (not just a 4th hull point but it's very hard to hurt from the front in more than just having a higher AV).


I have seen pictures of plastic 10 man squads of steel legion and imperial guard veterans. The steel legion appear to be pushfit plastic and are plastic re-sculpts. There is also a big tank seen, but no additional information right now.

All finecast has been discontinued and no models will be made in finecast. This currently only applies to 40k to test how it works with the community.

I have heard a rumour that GW are moving to a stage where they want to make more troops as pushfit models, and use multipart plastic sprues or elite/fast attack/heavy support models, to reduce consumer prices for more commonly purchased troop choices.

You can expect pushfit for named characters and multipart plastic for generic hq.

A Cipher model is done that appears to be pushfit, and I expected it to be released with the dataslate which did not happen, so perhaps something is coming.


via another anonymous source on Faeit 212

This is for the ********* Store command list, not including direct order from the website.
It sounds like a confirmation that GW team is working on a New Box for the Basilisk.

--
I hope they would make a box including variants.
*This is my personnel observation of the actual models*
They could probably make 2-3 different boxes:
- Basilisk / Medusa. (with "Enclosed crew compartment" option)
- Griffon / Salamander.
- Colossus. (depending if they keep the chimera pattern or moving to the leman russ pattern)

Also the Space Marines Whirlwind isn't on the Command List anymore for 2 months, and doesn't have the "Web exclusivity".

I just checked the Basilisk and it got the "Web exclusivity" flag now.

GW will announce the new Page in March, together with the sale of forgeworld models

This last bit was part of the conversations that were going on behind the scenes. Please consider these as rumors, and not as fact, but it gives some ideas to how Forgeworld is thought of.

via an must remain anonymous source


As for the 40k approved stamped stuff, it's falling under the usual "this is completely legal and fair to play with". The bottom line is that 40k approved models are meant to be in the game in the same way as a rhino or a squad of dire avengers. The issues involve forgeworld releasing constantly updated versions of rules in an effort to balance their creations (they take a lot of feedback through emails).


-Forgeworld will take over production of Finecast Models from April.
-All models will be FW-Resin recasts.
-Finecast will disappear by the end of 2014.


via a must remain anonymous source


FW super-heavy type models will just get their rules printed into the codex under the Lords of War sections.