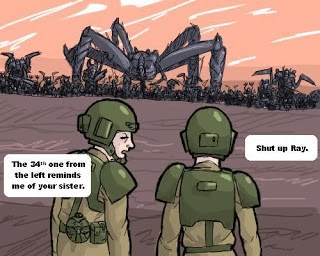 Since it's been a while since my last post, looks like the rumors have just been piling up. Todays rumors consist of a trilogy of Tyranid Dataslates, the first of which aligns with the previous rumors of a Tyranid Vanguard dataslate for genestealers and lictors, and the one of the next hopefully for a genestealer cult. Then we have potential Necron Fortifications, which I hope leads to fortitifcations for all of the armies. Forge World will potentially be releasing their own codices for their numerous armies, I for one can't wait for Codex: Elysian Drop Troops. Then we have a ton of info on the new campaign that Games Workshop is working on that is based around the Dark Vengeance starter box, a few Dwarf Rumors, and finally the website merging between Games Workshop, Forge World, and Black Library appears to be coming in March. Remember to take all rumors with a serving of salt.

via Eddie on the Games Workshop Digital Facebook page.

We announced in this month’s issue of White Dwarf that, starting later this month, the first in a trilogy of new Tyranid Dataslates will be released.  All three of these are going to have new datasheet formations for Tyranid armies to use, and if you’re a fan of Genestealers (I know i am, far to many games of Space Hulk in my teenage years), I think you’re going to like the first installment in the trilogy.

It is possible that we're going to see a new Fortification exclusively in Necron armies (including FW Harvest army).
The Fortification would be a Necron-Style Aegis Defense line, restricted to the Silent Armies of the Necrons.

To go with forge world combining web pages with GW, they will release codexes containing their products with all rules, stats and fluff for each army for both 40k and fantasy. These will be similar to supplements with new rules and warlord traits. The prices are said to be similar to 40k hard back codices

The Conquest of Kaiserslautern VI

via the Son of Dorn on the Most Perturbatory

Well, as I predicted, it seems Games Workshop is reaching back out to us with a new Campaign. Centered around the Dark Vengeance set, it's a low points event for some fairly casual play. However, it's still in beta.

The Gamer's Haven, in Spokane, Washington has the privilege, alongside approximately 12 other stores, (that we're aware of) of beta testing the missions. Apparently a community of over 200 people does count for something. Upon the success of the test event, it'll be rolled out nationally. Check out the details below:

"On the remote imperial planet of Kaiserslautern VI in a distant sector the servants of the Dark Gods open a new chapter in their unending campaign to destroy the Imperium of Man. Having planted the seeds of rebellion among the populace for centuries, Chaos Lord Krannon the Relentless is now ready to reap the bitter harvest. There is still hope, however, for the citizens loyal to the Emperor. Company Master Balthasar and his Dark Angels stand ready to defend Kaiserslautern VI with their very lives, if necessary. The fate of the planet is now in your hands. It is time to choose sides and once again let slip the dogs of war."

You will need a few things to play, mainly a small army that uses a modified Force Organization chart.
- 600 point army that has 1 HQ, 1-2 Troops, 0-1 Elite, 0-1 Fast Attack, 0-1 Heavy Support, and 1 swing slot that can add 1 more slot on any part of the Force Organization chart. Alternatively, you may use either one of the armies from the Dark Vengeance Starter Set. The Dark Angels player may not use the Limited Edition Chaplain however.
- 1-2 additional Basic Troop choices without upgrades, such as Kabalite Warriors, a Space Marine Tactical Squad, Chaos Cultists, etc. These should be in addition to your 600 point list as they will be added to your army later in the event.
- 1 Fast Attack choice without upgrades
- 1 Elite choice without upgrades

All of these unit are important as this is a story driven campaign that starts with a few small games and builds up larger as you get further into the story. The actual missions will be posted in the store, and score sheets for the event will be handed out on the nights of the event. This is designed as a fun and friendly event, so feel free to come out and have a great time with us. There will be small participation prizes for everyone who shows up such as lanyards and patches, so come out and get some free loot as well!


Here is what I have on the GW campaign

Conquest of Kaiserslautern VI
"On the remote imperial planet of Kaiserslautern VI in a distant sector the servants of the Dark Gods open a new chapter in their unending campaign to destroy the Imperium of Man. Having planted the seeds of rebellion among the populace for centuries, Chaos Lord Krannon the Relentless is now ready to reap the bitter harvest. There is still hope, however, for the citizens loyal to the Emperor. Company Master Balthasar and his Dark Angels stand ready to defend Kaiserslautern VI with their very lives, if necessary. The fate of the planet is now in your hands. It is time to choose sides and once again let slip the dogs of war."

The campaign is geared towards Dark Angels and Chaos Space Marines but you can swap out other armies into the mix.

Here are the missions
Models to participate: Dark Vengeance or equivalent for from a different army
Dark Ritual in Heilbronn
Chaos Lord Krannon orders a squad of raptors to gather the components for a dark ritual. Tactical squad Rapeal is sent in to stop the raptors.
Last Stand at Stelzenberg Square
Reinforcements are coming for the Dark Angels, but they are ambushed by an unending horde of Chaos Cultists.
Last Stand Part 2
The Dark Angels against overwhelming odds attempt to end the threat of the cultists by killing the recruiters.
Battle of Hochspeyer Heights
The final battle of the campaign, where Master Balthasar and the Dark Angels face down Chaos Lord Krannon.

There are some optional units that can join the campaign depending upon results, including the additional unit of a Land Speeder or a Daemon Prince for later missions.

There is a full list of Honors and Achievements for the campaign, which look to be designed to engage players to fully experience the hobby. You get some points for not only participating, but for the following actions as well.
-Playing a friendly game with a new player and teaching him something new
-Owning the proper codex, rulebook, tape measure, dice and templates.
-Bring a fully painted terrain piece or help the shop paint one
-Recruit a new person to participate in the campaign
-show off your honors in your display case on the inside cover
-play a game against everyone else that is participating
-write a short narative battle report for the stores facebook page
-complete a paint plan

You also get points for playing and painting your armies for the campaign.

Alternate units listed in the missions are as follows for each army
Blood Angels:
Sanguinary Guard
Death Company

I have tons of new rumours from my source. He was spot on with the dark elves (including the peg leg fleetmaster) so I do believe him.

Runelord can't add DD
Dwarf army can add 2 DD every magic phase
Anvil is Bound spell (can plus the S for dwarf)
Dwarf Gyrocopter (new models) can make two version:
1 is bomber(max can take 2)
2 is fight with machine gun (max can take 6)
A lot new special character
1: King of Eight Peaks
2: Engineer with big gun
All the new models are infantry (with out Gyrocopte):
1: Hammerer
2: Blacksmith
3: Longbeard
4: Slayer
5: Irondragon(name not confirm) new shooting unit
- like Chaos Dwarf IG 4+armor S4 T4 weapon is flaming attack
(The Hammerer Blacksmith and Longbeard is in same box, the Slayer
is the other box because no armor, Irondragon other box. All the new models
very cool.)
All the rune are same and warmachine too
The magic item:
1: The armor can give the user T10
Sorry for the bad English. Haven't had time to clean it up as I'm on my phone. Source also says that Hammerers can get 2+ AS with a 6+ ward. Probably with a rune. I think these are maybe Ironbreakers?

The new gw website will launch in march. The Forgeworld, Black Library and GW sites will merge as one under the name of Games Workshop.