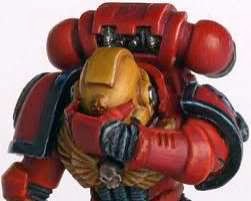 Looks like it's bad news for everyone as we see rumors come out concerning the effects of GW's recent financial troubles. Luckily, we still keep getting material about the next army due to come out in February, the Dwarves, and it seems that Forge World is taking over the LotR and Hobbit franchises, not to mention some more details on how the new magazines. However all of that is still overshadowed by the rumors that Wood Elves, Brettonians, Beastmen, and Khemri are being discontinued, and the end of GW stores in Germany.

There will be a new Dual kit which will make a Throne carried by 4 Dwarves, in which Thorgrim Grudgebearer or a normal Dwarf Lord can be mounted. The kit will also make the Anvil of Doom, which is swapped out with the seat of the throne and carried by 4 Dwarves, and counts as a mount for a Runelord. The model will be on a 60x100 base and is pictured in a unit.

There is a new infantry plastic kit which can make Hammerers and Iron Breakers. The Hammerers are armed with great weapons (Hammers) and the Iron Breakers have hand weapon and shield (axes). The bodies are the same for both with head and weapon swaps.

The other infantry kit is a Troll Slayer unit that can also make a new unit of Berserkers. The kit also makes a giant slayer.

The new single plastic figure is a Thane holding a hammer.

All the existing plastics remain.

A lot of things will change at Games Workshop 2014:

* LotR and the Hobbit francise will be handed over to Forge World
* Forge World products will be available over the redesigned Games Workshop
webpage
* no more Fincecast products
* Wood Elves, Bretonnia, Beastmen and Khemri products will no longer be
produced, updated or supported
* roughly 30% of the sortiment will be come webshop exclusives
* all Games Workshop stores in Germany will be closed

via Dennis on Brueckenkopf online

As we have just learned that, Games Workshop Germany will shut down and the leadership of the German shops to England.

From this measure are also Games Workshop France and the USA affected. According to our source, the employment contracts of the employees were dissolved in the HQs as a result, with some probably the choice was woks to move or discontinue to UK.

The chain of stores is placed under the direct leadership of Games Workshop UK in Nottingham. Here are sure to report in the next week, the new boss in the stores, as they are currently without contact.

This change was apparently already on 16 January 2014 at the same time implemented with the announcement of the results of the semi-annual report.

via an anonymous reader here on Faeit 212

Now that there has been an official announcement, some more infomration flowing, and this coming from emails to customers of stores.

Subscribers will be getting a letter, you are correct along with a copy of both the first weekly edition and the monthly one along with it for your viewing as part of the letter. The new weekly edition will sum up the weeks news, have all new articles and contributors and some of the tried and tested ones too, this will range from modelling and painting to battle reports etc!! It will be £2.40 a week, but you can take it and leave it as you want obviously so the cost per month depends on what you want to get!! The digital edition like the paperback will undertake the change but any subscriptions again will stay the same!! Both have painting, gaming and building articles, just the monthly one has more room!!