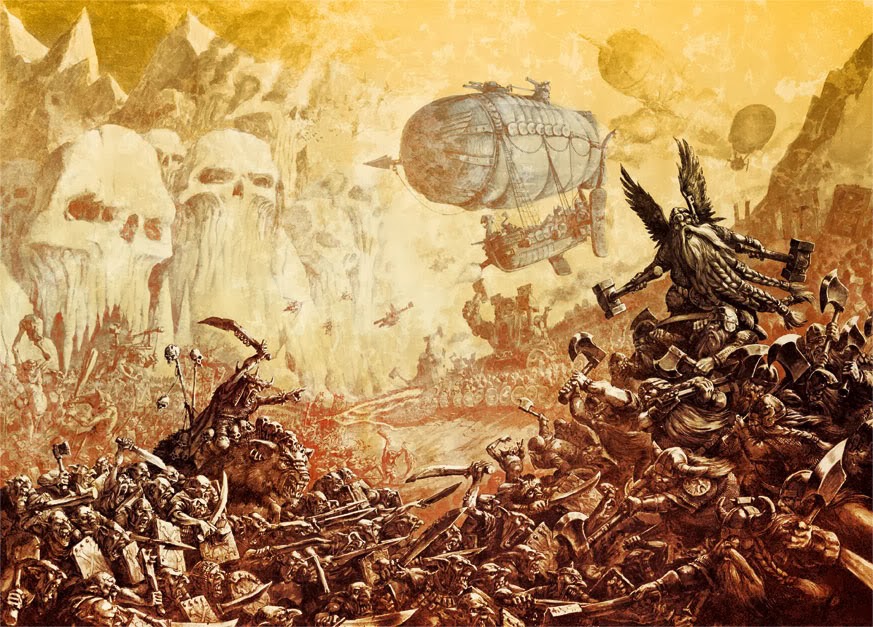 Lately we have been having just way too many 40k rumors, so for all the Fantasy fans out there I have gathered a ton of fantasy rumors for your consumption. Current word puts 9th edition around the summer of 2015. Also, there have been a few things stating that Forgeworld will be legal in future 40k tourneys, which is a great thing. The options that Forge World brings to the table are massive and frankly, the models are far beyond GW plastic that it's a crime to keep them off the table. And finally there has been word that the Monthly White Dwarf is being replaced with a new weekly White Dwarf called White Dwarf Visions and a new monthly magazine called Warhammer Visions.

via Harry on Warseer

I will try and pluck some information from the dark forgotten corners of my brain .... memory is shot to pieces. ...so some of this may be complete bobbins ... and well out of date but I seem to remember Fantasy being in the 20 something %'s (this is a few years ago ... it may well have fallen below 20% now ... I have heard it is not doing so well).

The smallest fatasy army was making as little as 1%

Now when you consider they make over 10 Million in profit it still seems 1% of that is still worth having ... except when the plastic moulds cost as much as they do it is hard to make much profit out of a wood elf mould. Where as a space marine mould ... will make twenty times as much from the same costs.


makes it a bit easier to understand the release schedule?


EDIT: I heard they did experiments to try to discover if it was the price of the kits .... they released the Dark Elf Cold One Knights and the Chaos Knights at a lower price point to see if everyone bought twice as many as is so often stated ... They didn't. The same people bought exactly the same number of boxes as they do at the higher price point.

(I am not saying this is what happened ... or that they concluded they might as well continue to charge more for their kits to make a greater return ... I am just saying that is what I heard).


About shelving 9th edition ... I did hear that they had discussed shelving fantasy FULL STOP! (Not sure how long that discussion was but that's what I heard).

I heard they discussed loosing some of the least popular armies.

I heard they discussed condensing the army books into less volumes. (So the less popular armies could survive).

I heard one Warhammer armies book ... I heard two books?

I have no idea where the dust settled on these discussions except that they decided to do something .... and that it would have to be radical.


As far as I know I am the only person to have predicted 2014 for 9th edition ... because I assumed it must be around the corner based on the timescales I usually hear stuff. But hastings posted almost immediately to say he had heard it was 2015

I always assume he is correct and I am incorrect ... (hastings =Jedi Master Harry=Young apprentice).
I don't think 9th edition has been pushed back or shelved. I think when I posted to say it was coming in 2014 ... I was wrong.


In defence of this guy:


Quote Originally Posted by MiyamatoMusashi
So... there is never any source other than official GW statements which is not "speculation"?

Every rumour, ever, has been speculation and nothing more?

The beancounters at GW are deeply dissatisfied with the money WHF makes. That's not in their official annual report. But it's not speculation either. Whether you choose to believe it is up to you. But I'm not speculating that that's the case, I know it to be the case. Doubt me if you like, call me a liar if you feel so inclined, but even if you conclude I must be merely speculating, at least accept the possibility that SOMEONE may be in a position to hear things that don't appear in the annual statement.

There is a very basic difference between "speculation" and "unconfirmed" and "not from an official source". Was Hastings just speculating for all those years of consistently providing accurate information of what was coming? Or was he simply reporting what had not yet been officially announced?


Quote Originally Posted by pjklan
ok.
so, would you kindly share with us what you know about 9th edition?
thank you.


He heard pretty much the same things I did ... from completely different sources a few months after I did.

I first heard about all this in the June/July 2011

Quote Originally Posted by Tancred II von Quenelles
To sum up WFB 9th is hitting in 2015 with some unpredicted and radical changes - am I correct?


That is about the size of it.

My understanding was they were scraping everything and starting again. So pretty difficult to predict what the changes might be.

Having said that we have heard about radical changes before the last several, slightly tweaked, editions.
So don't hold your breath.

via Larry Vela on BoLS

Have no fear, the stunties are on the march - headed your way in February.  Here is the rundown of new kits coming down the mountain.Latest word speaks of:Dwarfs - February (I'd bet on February 8th)The Kits:Plastic Tunneling VehiclePlastic infantry heavy armor unit kit (dual-build)Plastic infantry light armor unit kit (dual-build)Plastic War AltarPlastic New VERY large gun/cannonPlastic Beefier GyrocopterClampack Lord
No finecast was mentioned at all.  If you look at what needs plastic kits in the existing Dwarf range, and look to the old-unit/new unit splits in the Dark Elves release for inspiration, it's not too hard to figure out what's coming.These latest set descriptions dovetail almost exactly with Spanish rumors from early November.

The events team at warhammer world announced a few days ago a new event called the triathlon. Its a 3 day event combining Kill Team, Battle Brothers and Throne of Skulls. But the big news is that they have announced Forgeworld models, including those from the Escalation FAQ, will be allowed in this tournament.

via Tim from the Faeit 212 inbox


The European representatives of GW send in March for the first time their "black shirts" for further education to England. Previously, it was always carried out in the HQs of their countries.

The staff should be prepared for FW. There are probably plans for store events with Horus Heresy and FW 1-click Packages.

FW products should, if they are coming soon, not to rise in price!


There will be an announcement this Saturday. The monthly White Dwarf magazine is history. There will be a small weekly white dwarf magazine and a new monthly magazine, called "warhammer: visions", 230 pages strong(!!!). This will start in February.

Also there is a meeting in February for every European "black shirt" in England. Maybe for the new GW website, including FW. :)


via a must be kept anonymous source on Faeit 212


As a heads up, you're going to be getting emails about "weekly white dwarf mini magazines."
It's called White Dwarf Visions and it's true.
They will focus on talking about the hobby and community more so than being a sales magazine.