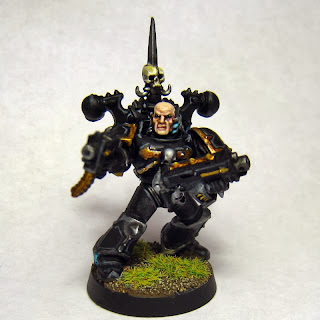 There is a reason that my username is "The Son of Horus." The Black Legion, and the Sons of Horus that came before them, have always been among my favorite parts of the Warhammer 40,000 mythos. I own around 15,000 points of Black Legionnaires, and the collection continues to grow as new options for Chaos Space Marines appear. Painting black armor is surprisingly difficult, though. It's a strange color to have as a dominant part of a miniature-- we often prime our models black, and if you're working on miniatures at the most basic level or untrained manner, that makes black armor a very simple and user-friendly option.

However, when you go to paint a miniature more seriously, black presents a strange problem. Because miniatures are as small as they are, we use what are ultimately unrealistic highlights to force the eye to pick up the detail of the model. But, because black is the darkest possible color, it is difficult to highlight black without turning the overall effect grey.

There are as many different techniques for painting black armor as there are painters out there, and there's really not a right answer. What I have found works best for me is a series of very fine, controlled grey highlights which direct the eye to the recesses of the model. It can be counterintuitive to normal shading techniques, but produces a generally pleasing result which is neither time consuming nor difficult to replicate and leaves the armor unquestionably black instead of looking grey. 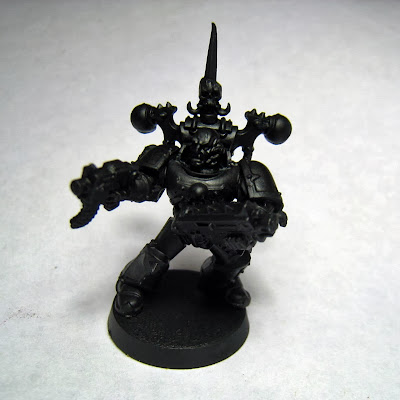 I begin by taking Mechanicus Standard Grey and finely lining in near the recesses of all the banding on the armor, as well as applying a fine edge highlight to any rounded edges of the armor to give it definition. 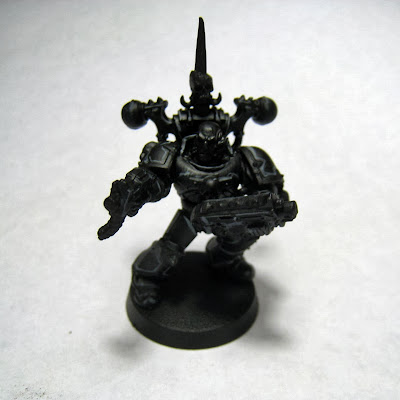 Next, I apply Ironbreaker to any silver areas. That's any banding that's not on the torso or shoulder pads, as well as the soft armor bits, any spiky bits, and the metal parts of the guns. 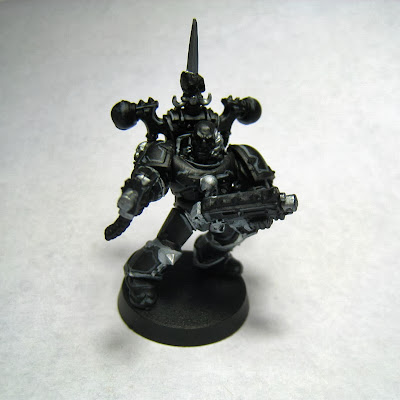 I now apply a wash of  Nuln Oil to the entire model. This tones the grey back a little bit and shades the metal bits. 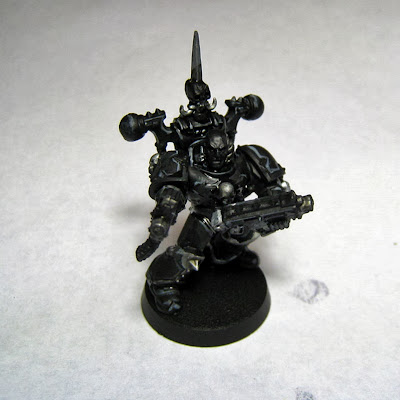 Once the black wash is dry, I apply Screaming Bell to the rest of the banding, as well as any exposed ammunition. I also re-highlight the silver areas with fine edge highlights of Ironbreaker. 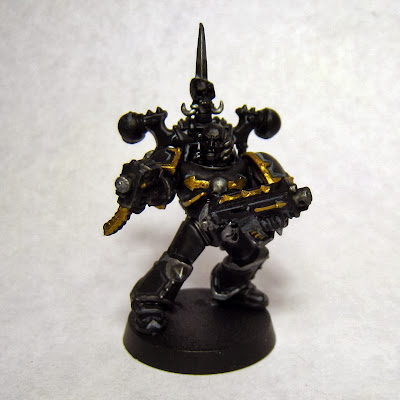 I selectively reapply some of the highlights that are a little too washed out from the shading with Mechanicus Standard Grey. They can look a little chunky here-- it gets cleaned up later. I apply a base of Cadian Fleshtone to the skin at this point, too. 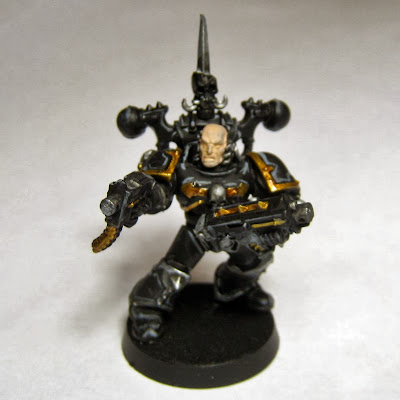 Now, I wash the face with Reikland Fleshshade. I then mix up some Reikland Fleshshade and Carroburg Crimson and wash the gold areas with this mix. It's roughly 75-25% Fleshshade to Crimson. While I wait for the wash to dry, I basecoat the skull with Steel Legion Drab, and apply Sotek Green to exposed cabling. The cabling could be painted silver if you prefer, or even just left black and highlighted with grey. I like adding a little color to the model to break up all the black and metal areas, and teal has always been my go-to color both for its good contrast with black and as a nod to the Sons of Horus Legion's heraldry. It also helps my Black Legionnaires stand out as distinctly mine, which is never a bad thing, either. 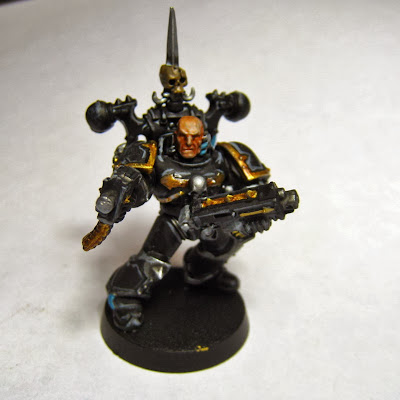 I dot the barrels of the guns with Abaddon Black, and clean up the previous grey highlights a bit with it as well. I reapply a layer of Cadian Fleshtone to the skin, and apply a layer of Ushabti Bone to the skeleton. On the face, it's important to leave the recesses showing to help define the folds of the skin-- you want to hit the forehead, brows, lips, nose, and cheeks. Exaggerated recesses, as you see in the picture, are ok at this point.

I apply a highlight of Gehenna's Gold to the gold areas. Less is more with this-- I put it where the light would most harshly hit the model, rather than as a hard edge highlight. 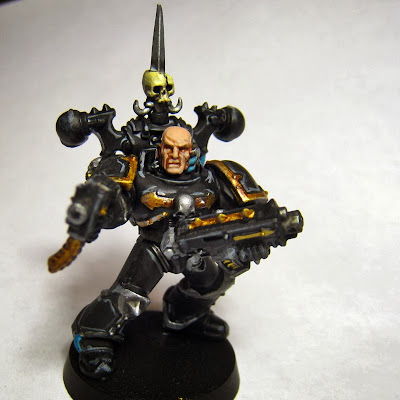 I apply a layer of Kislev Flesh, focusing on the brows, cheeks, and nose, and then dot the eyes in using Abaddon Black and White Scar. I put an edge highlight of White Scar on the skull. I very lightly highlight the gold areas with Ironbreaker, and use Bahharoth Blue to highlight the teal. That's about all there is to the Black Legionnaire himself-- it's a very simple process that only takes about 15-20 minutes tops. 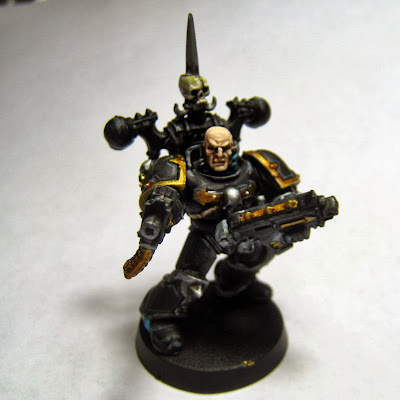 I apply the Legion marking to the blank shoulder pad, and base the model. With black armor, it's best to go with a relatively light-colored base, to help accent the black armor and make it stand out from what it's standing on. A drab, urban base often causes a model wearing lots of black to wash into the base. That can be good if you're trying to hide a loose painting style, though. I don't do anything too complicated to base my Black Legionnaires-- I just glue some sand to the base, paint it with Steel Legion Drab, drybrush with Ushabti Bone, and glue some static grass on once that's dry. 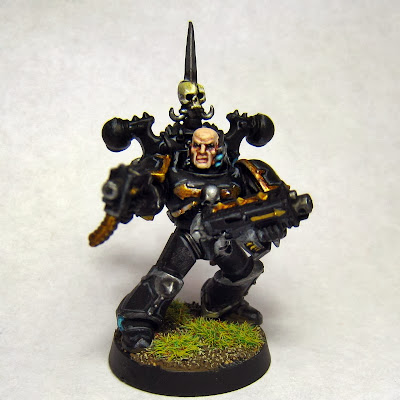