How to be a Better Wargamer 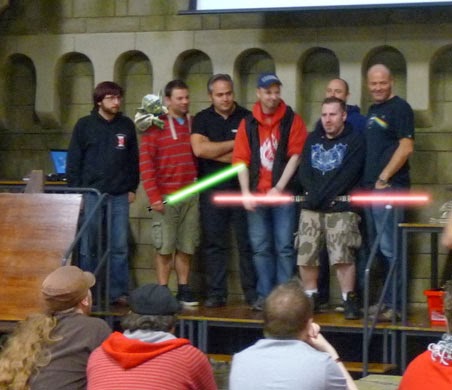 In this article series, I'll discuss my thoughts on ways of improving as a wargamer. Improvement is something many of us strive for in our hobby, but what's important is that there are so many different ways to become a better tabletop gamer. So even if you are a top-tier tournament Jedi who wields a tape measure like a light saber and rolls dice with the force, I’m going to try and convince you that there are other ways you can improve your game.

Before I get into it, its worth saying that I by no means believe myself to be perfect, but I'm always trying to improve by being more well-rounded. If I turned up at my game club every week and smashed my opponent into oblivion, handing them the mop so they could wipe up their tears after Riptides and Wraithknights poached them in Plasma, I'd eventually come away thinking that something was missing. It wasn't as fun as it could have been, not for me, and certainly not for my opponent. Sure, I'd be winning, but I could still be better...

So the key areas:


Winning - Let's get the obvious (and the most common) out the way first. Everybody likes winning their games. Some more than others, no doubt there, but at the end of the day we all want our plastic toy soldiers to send the enemy back to their sprues with their ears still ringing.

Fluff - the less popular ones now. So many of our tabletop games have amazing lore and background, yet I don't think its celebrated enough. It can be awkward to try and shoe-horn some background in, yet a gaming system without background is just so soul-less. But never fear, it can be done without looking like an anorak!

Sportsmanship and the Community - We play a social game. Nuff said.

These are 4 key areas I believe make us better. What I'll do is break these 4 areas down and give you my thoughts on them, and some ways they've worked for me to make an already amazing hobby into an even better one.

How to be a Better Wargamer Part 1 - Winning


In the first part of this series, I’m going to share my thoughts on how you can improve your play on the tabletop to win.


So to kick it off, preparation. Benjamin Franklin once said ‘By failing to prepare, you are preparing to fail’. Now I promise that’s the first and last cheesy saying you’ll have to put up with, but this one is definitely true. Ever played someone who has rocked up to your (pre-organised) game, unloaded his models from shoddy old Tesco bags, pulls out a pen and paper and starts writing up an army list? You then find out he’s forgotten his rulebook so its all on you. Sure, Johnny Shoddybags might end up being Sun Tzu, but either way, he’s gotta work hard to get himself back in the game.

With this in mind, its worth sitting down and getting stuff done beforehand. The obvious one is the army list. Write loads of them, and tinker them over and over again, because proper list building is absolutely essential if you want a decent force. On top of that, small differences can win you the game. It’s Turn 5 and an objective your holding is about to be stormed by a Dreadnought. Your sergeant has a piddly combi-melta? Time to make him a hero! But if you write your army list in haste, these things can get overlooked.

When thinking about what units to take, consider the different roles they will be required to perform. You can generally fit units into attack, defense and support. Attack units will do just that; ram their bayonets down the throat of the enemy, probably dying in the process. Defense units are your objective claimers. They will win you the game. Now they don’t have to claim objectives straight away, but they need to be alive at the end to do so. With this in mind, they can play a supporting fire role, just make sure they don’t bite off more than they can chew so they can whip back to that objective turn 5. Lastly, you have the support units. These guys should ideally be mobile enough (or capable of deep striking) to turn up wherever they are needed, OR have the range to shoot where needed. Things don’t always go to plan, particularly because your opponent is trying to smash your models to bits too, so your support units can dish out some pain where things aren’t going as well as they could be.

So some examples. In my Chaos army I’d have Maulerfiends and a Cultist blob with Dark Apostle to attack, my Noise Marines to defend with supporting fire from their Blastmasters, and my Heldrake and Raptors to support. By assigning roles to my units, it focuses my game plan and improves effectiveness.

With your list sorted, now visualise your game and come up with a strategy. Diagrams can help here. It's all about maximising effectiveness, so you want to know exactly where your units need to be to do this. Troop choice with plasma guns? Mid-table? 5 man combat squad with Lascannon? Your table edge to hunker down and fire? Get that sorted before the game. One thing about strategy, however, is that you need to leave room for flexibility. If your facing a horde army that wants to charge across the table and beat you over the head with a crude looking axe whilst shouting WAAAGGGHHHH! in a cockney accent, those mid-table shooters might be worth hanging back for a few turns to whittle down some greenskins, or heading up the flank where they can't be swamped. Visualise it all, then hopefully there won't be so many nasty surprises.

Putting a unit in the wrong place can, at best, make it useless for a few turns, and at worst, the rest of the game. Plot out where you want your units to be both mid-way through the game and at the end. That huge Cultist blob I have for attack? I’ll put them right in the middle and send them straight up the table. That way they can tar-pit any enemy nasty and offer some serious board control right in the centre. My opponent just has to deal with them. Maybe you have a fast but fragile unit? Deploying it on the flank will mitigate damage, but then its fast enough to boost to almost anywhere when it’s needed. With each unit’s role visualised, you can create some proper synergy in your army to create an overall strategy.

Now once you start the game, you’ve got a game plan, you know your army’s strengths (and have assigned them the roles to utilise those strengths), all you’ve got to do now is get down on your knees and pray to the dice gods! Well, no, its not that easy, but if you’ve done a few of these things beforehand, you’ll find things going much better.

Even if you follow these tips, its obviously not a guaranteed winning formula. Sometimes a unit is just rubbish, or you make bad decisions. This is where the post game evaluation comes in.


This is a really good opportunity to look at how things went, and to find areas that can be improved. A really good way to do this is through a war journal. I started playing 40k with Dark Eldar, and recorded EVERY SINGLE RESULT! I kept a tally of wins and losses, who they were against, what mission it was, the friendly and enemy unit of the game, the friendly flop of the game, etc etc. I wrote a report on each and every battle commenting on what worked and what didn’t, considering both tactical decisions and unit performance. When preparing for the next game, I’d read this through and use it to make necessary changes in the list or my decisions during the game. I highly recommend this, as it’s improved both my army and my gaming ability in abundance.

Also, talk to your opponent. Wargaming is a pretty involving hobby, so most gamers know a few things, particularly if they’ve been playing a while. They (should) be more than happy to share any advice with you. If you won the game, have a chat with them, as it will highlight what went well and what didn’t. If you lost, they could offer you some tips for next time. At the very least, it will improve your knowledge of the opponents army, and ‘knowledge is power’ (Another quote! I lied!).


Finally, hit up the internet. There are so many excellent articles on the interweb that can turn you into the armchair Genghis Khan, from blogs, to forums, to youtube videos. I’ll always remember my first tactica article that set the tone for my Dark Eldar army - The Kabal Template by Ketara over on Dakka Dakka - and I still play with it to this day.


One final thought to leave you with. At the end of the day, YOU are making the decisions and YOU are rolling the dice. Take all the advice you can get, but turn it into something that works for you. You may need to respectfully ignore certain opinions, and that is absolutely fine, because it’s your army, your decision. Plus, it will make it all the more sweeter when its an army you created yourself, and not something you’ve copied and pasted from the net.
By Elliot