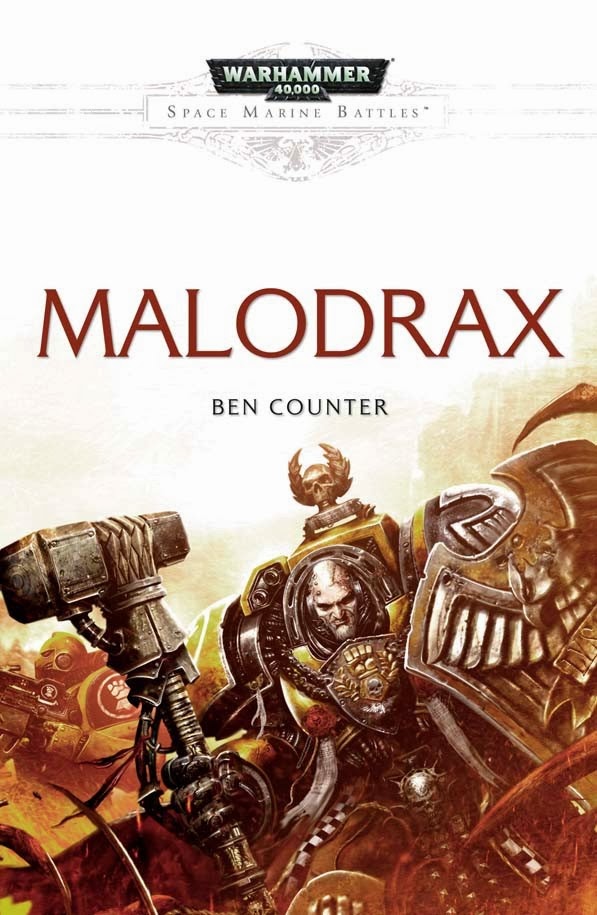 Lord of the Night reviews the latest novel in the action-packed Space Marines Battles series, Malodrax by Ben Counter.


"A twisted adventure filled with what Ben Counter does best, mind-bendingly insane vistas mixed with heroes that stray the line between good and evil and villains who could induce nightmares." - Lord of the Night @ Talk Wargaming

Malodrax is a novel that I was wary of, due to the recent changes to the Imperial Fists lore made by the Sentinels of Terra codex supplement. And while one or two elements of the book do clash with what the codex says, Counter has still written a fine story that takes many unexpected twist and turns, and of course the book is filled to the brim with the maddening and vivid imagery of Chaos that Counter does better than any other author in Black Library.

One of the most famous exploits of the Imperial Fists is the legendary escape of the Daemon World Malodrax by First Captain Darnath Lysander. Taken in battle with the brutal Iron Warriors of Warsmith Kraegon Thul, Lysander survived a nightmarish month trapped in the brutal hell that is Malodrax and escaped back to his Chapter. At least that is what the story says, but is known and what really happened are two very different things, and it may be that Lysander's time on Malodrax did not quite happen as he claims, but what could the veteran hero be hiding? Did Lysander cross the line on Malodrax? Did he survive only by a faustian bargain with the damned lords of the planet? Or is there a much simpler explanation to his miraculous survival? As the Imperial Fists return to Malodrax with vengeance as their goal, all will be revealed in the blood-stained halls of Kulgarde.

The story in Malodrax is divided into three plots that are told in separate chapters. The first is Lysander's time on Malodrax as a captive, how he survives and how he escapes the planet. The second is Lysander's return to Malodrax with the Chapter and how they take revenge. And the third is told in a journal extract form, telling the story of another group to come to Malodrax and how they met their ends.Counter keeps the first two stories separate, never mixing the narrative of either journey to Malodrax but the journal entries appear in both narratives to further explain things about Malodrax and explain certain plot twists and advancements. I particularly enjoyed the themes that the story explores, such as what exactly constitutes "crossing the line" and how far is too far to go for victory, the latter being an important theme in all of Ben Counter's Imperial Fists stories. The point of Malodrax is to show where Lysander gained his "end justifies the means" viewpoint and why he developed that view. I very much liked both stories moving alongside each other and often teasing or hinting what might be coming in the future of the other, the second journey for example at one point revealing that Lysander has met a particular character before and thus we know that something bad is coming in the first story, but rather than finding this to be spoilery I found that it fueled my interest to find out exactly what happened and why Lysander is worried that his brothers will discover what he has done.

The characters are quite well written and here we see Lysander at his lowest, which allows Counter to very interestingly explore the nature of a Space Marine in regards to victory, defeat, despair, humiliation and the purpose of hatred and revenge. His Imperial Fists are not vastly important characters, only Chaplain Lycaon and Sergeant Kaderic really play enough of a role to count as secondary characters, but I did enjoy Counter's depictions of moments of brotherhood between the Fists, and Chaplain Lycaon's dry wit being used to decry the enemy and preach sermons made him a likable character, even Lysander having a few moments where his practical and blunt nature provided some laughs. One character that I quite liked even though he was more of a background thing than a fleshed out character was Halaestus whose own time on Malodrax shows that even a Space Marine has a breaking point, and that even for them there may be no way back. Counter's villains were fantastically designed, each one a living nightmare from the dictator Kraegon Thul to the depraved Shalhadar the Veiled, and the wretched Broodmother being one of the more clingy Daemons, each one stands out as a different kind of monster and as Lysander interacts with each one we see what each one of their goals is, and once you've read the entire book you can see something very interesting in each one of them which I won't reveal here for spoilers. The final character of importance never actually appears in the book but we see how Malodrax attracts damned souls through his notes, and we learn the mysteries of the planet and that there is more to Malodrax than meets the eye, the specifics of which I thought was a great twist.

The action in the book is not what you'd expect from a Space Marines Battles novel. The biggest battles come in the segments with Lysander returning to Malodrax and even then he only has around thirty Space Marines at his side. This makes the scale of the battles much smaller than the other books in the series but it doesn't make them bad, as Counter compensates with his flair for inventing horrific and unique enemies for his characters to face. Every Daemon, traitor and mutant in this book is unique from the rest and it creates a sense of variety that you don't get in most 40k books where the authors stick to the classic enemies like the Orks and Chaos Space Marines, the latter of which Counter does have but he makes sure they stick in our minds through their appearances being well described. The first plot does have battles though they solely contain Lysander surviving among the madness on Malodrax, but his skill in combat makes for some exciting scenes, especially considering what he uses for a weapon for the first third of the book, the image of which had me laughing for quite a bit. I think this book could have contained a few more battle scenes, but what it did have was well written and had powerful imagery that really sucked me into the battle and, importantly, was clear in what was happening at what point so that it could be followed.

The pacing was done well, the clear separation of the two journeys to Malodrax meant that each chapter left off where it would be dragging on to continue and went back to the other story to pick up and show what important points come next. The interior artwork was nicely done with a rendition of the cover art of Lysander up close, a map of the lands of Malodrax that the novel features, and an absolutely stunning depiction of Warsmith Kraegon Thul that really captured the imposing presence and nightmarish appearance that Counter gave him in the narrative. One or two narrative flaws do exist in the book, the two most glaring being one instance where Chaplain Lycaon is mistakenly described as Captain Lycaon, and the second being an instance where the Iron Warriors are referred to as the Iron Hands by the narrative. These editing mistakes will probably catch your eye but really they are minor and don't detract from the novel itself. The connection to Counter's other stories featuring Lysander is a bonus as well, in my opinion Malodrax can be considered the start of a chain of stories that includes the novella Endeavour of Will and the novel Seventh Retribution.

Now my favourite quote, it is without a doubt this exchange between Chaplain Lycaon and Lysander because it was such a funny moment,

"Do you know how to kill him?"


"Cut him into pieces and burn them."


"Is that what the people of Malodrax say?"


"No. But that works on everything."

The ending is a nicely written one that reveals the real twist of the book, the purpose behind the entire novel's events and hints that things may not be as finished as Lysander would like to think. Counter wraps up the story of Malodrax and at the same time in a way starts the story of Captain Lysander, who we know will go on from here and become the hero who will do anything for victory that we see in the other Imperial Fist stories and the lore. Really the story ends mostly as you'd expect it to as you read the novel, it isn't a twist ending but it does reveal to the reader that one character's theory about a certain something in the book was more accurate than he believed it to be, which is an aspect to the story that I really liked as it added a whole new dimension to the story and made all of the events of the novel take on a new light because I finally understood exactly why they happened, and it was quite surprising.

For an enjoyable and surprising story, interesting characters who are all tested throughout the book and how they pass or fail those tests revealing who they really are, and more of the intense and darkly beautiful, to me at least, depictions of Chaos that is the aspect of Counter's writing that I like the best, I give Malodrax a score of 8.3/10. This is a novel that I would suggest most 40k fans try, as with most of Ben Counter's work it's something you'd have to try yourself to see if you like it, I do think it's better than his novel Seventh Retribution, which I no longer believe was as good as I first thought, and that those who are wary of Counter should try Malodrax, it might make you a fan.