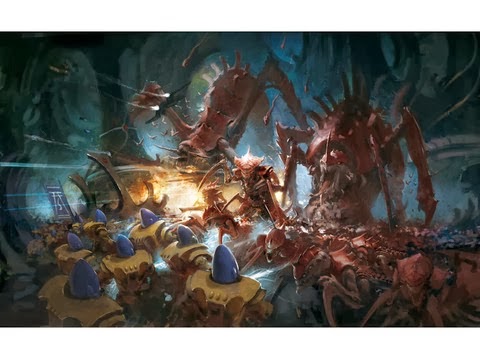 Alright, today I'm going to be doing something different because the sheer amount of text I will have to post. In this post, I will be posting a summary of everything we know about the Tyranids so far, which considering that the codex is so close to release, is a lot. Tomorrow I will be posting the various Fantasy Rumors I have gathered up which will also be a sizeable amount.

via TastyTaste on Blood of Kittens

The HQ Options:
For starters, I note there's no rule that makes the Tervigon a troop choice. They are HQ, and you pretty much have to surrender a Hive Tyrants to take one. The only real upside is that they produces the same 'Gaunts you use as a troop choice, along with all the upgrades. Sorry, I am blind (see replies below). For every brood of 30 (all 30) Gaunts you can get one as a troop choice.
It's interesting to see Deathleaper as a HQ choice, and at 130 pts only snap shots can be taken at him. Not bad, but he lacks synapse. The Swarmlord is now 285 pts, with little in the way of new features to recommend it. The Tyranid Prime at 125 pts is a bit pricey, since it also chews up a HQ slot, and Old One Eye is a similar waste of a HQ slot.

The Troops:
Termagant broods up to 30 now, with a lot more options. Genestealers remain a bit rubbishy, and seem to need synapse (although they do have Ld 10). Warriors have a bigger range of guns (but note there's still nothing in the whole book with skyfire). Overall, nothing to see here. Move on.

Fast Attack:
The Harpy (135 pts) and Crone (155 pts) are what everyone's looking at I suppose. Harpies haven't changed much, except the screech now gives the enemy -5 Init. There is no more giant spore mine bomb. The Crone is basically a flying flamer, with Str 5 Haywire missiles. I think you'll be taking them, because there's really no anti-air option otherwise.
Raveners seem to have lost rending.

Elite:
Hive Guard cost upped by 5 pts, not many rules changes. They have a Haywire gun they can take now. I am kind of sorry to lose the Ymgarl Genestealers, as I liked the flavour, but gone they are.
The venomthropes are kind of awesome, with their shrouded rule and poisoned 2+ attacks. But will you drop Hive Guard to take them? I dunno...
The Haruspex is built to rip apart infantry mobs, and little else. It has a Str 6 tounge (assault 1), and 3 attacks. Each unsaved wound gives it another attack. And it heals back its bank of 5 wounds for every wound it inflicts, and can also take regen. It's a little bit specialised for my tastes, at 160 pts.

Heavy Support:
Mawlock is the biggest improvement IMHO. Dropped to 140 points, and if it doesn't clear the area the S6 AP2 hit happens AGAIN. It also ignores cover now. Mind you, if it doesn't clear the area on the second try, you get a mishap roll. It also can't burrow on the very first turn like before, and loses the option for Regen.
The Trygon has gone up to 190 points, lost one attack, and...yeah. That's it. Everything else is the same. The Trygon Prime might actually see more use, there being a bigger need for synapse now. But 230pts is kind of extreme just for the synapse, no?
The Exocrine (170 pts) is kind of awesome, with Assault 6, Str 7, AP2 shots. Or it can drop a big blast. Park its butt for a round, and it's +1 BS. The Tyrannofex is dropped to 175 pts....
Well a few things have been fixed about the old Codex. Warriors have flesh hooks as an option, which are assault 'nades. The Lashwhip adds +3 init instead of dropping things' init to 1, which I think is better.
The Carnifex is down to 120 pts, and its Hammer of Wrath does D3 attacks which is nice.
Double ST just gives one more attack. No re-rolls...
Genestealers come with Rending claws, but yu can buy ST for 4 pts per model
Hormagaunts are Fleet, Move Through cover, and have bounding leap (run +3 inches)
Haywire weapons. The flying Crone has Haywire missles, and the Hive Guard can buy a Haywire "shock cannon". Also, the electroshock Thorax swarm is now Haywire.
The Lictor's Pheromone trail says any model can drop within 6 inches of it when deep striking without scattering (again, don't have the old book here to compare, sorry)...
One pair of talons gives you the amazing standard attack as stated on the profile, at AP 6.
Heavy Venom = 36', Str 9 AP 4, Assault 1 Blast
Venom = 36', Str 6 AP 4, Assault 1 Blast
Zoanthropes have Warp Blast psyker power. Takes 2 charges, and is 24' Str 5 AP 3, Assault 1 Blast, OR 18', Str 10, AP 2, Assault 1 Lance...
The Lictor doesn't scatter when deep striking. The flesh hooks have lost rending. Overall it uh...sucks I think. But it IS 50 points!...
Further clarification: The Lictor has rending claws (one set), and one set of ST. It has flesh hooks (assault 2, user Str), stealth and Hit and run, phermone trail, infiltrate, and move through cover. Stats are: WS 6 BS 3 S 6 T 4 W 3 I 6 A 3 Ld 10 Sv 5+...
Deathspitter 18', Str 5, Ap 5, Assault 3
Zoanthropes are a psychic brotherhood (level 2), that always know warp blast. So they generate one more.
Speaking of which I just noticed: The Tervigon is now 195 points, and is mastery level 1. So its psyker powers got nerfed a bit I think.
The new mechanic in the book is that instinctive behaviour is now lurk, feed, and hunt. Basically lurk means camping there, feed is assault, and hunt is shooting. If you fail leadership and they go on instinct, something bad happens on a 1-3 (lurkers fall back, shooters go to ground, feeders attack one another). On a 4-5 its something like can only assault, can only shoot, etc. On a 6 they gain a small bonus (feeders get rage, lurkers get stealth, shooters get preferred enemy.
The Prime still boosts the warriors as always...
The Trygon tunnel is the same as before (mark it, others come out from it, blah blah).
Tyranid melee weapons come as pairs. Each pair is a single melee weapon. A tyranid mist fight with TWO pairs of ANY melee weapon to gain a bonus attack for using two weapons. A Ravener with two pairs of ST gains a bonus attack, or a Stealer with rending claws and a pair of ST does as well.
Crushing claws gives + 1 Str, AP 2, Armourbane, and Unwieldy
Shrikes are still around, with 5+ save...
Some other points (again, sorry this is in bits and pieces, I am sneaking glances):
No Doom of Malantai, No Parasite. No mycetic spore. I do see the Red Terror is back (if he hits 4 times, he swallows a guy).

1 - Nature's Bane - At the beginning of each movement phase, select one jungle within 12' of the warlord. It becomes carnivorous for the game.
2 - Heightened Senses - Warlord and Nids within 12' have Night Vision.
3- Synaptic Linchpin - Warlord has 18' synapse
4 - Mind Eater - 2 VP for independents slain by warlord in a challenge.
5 - Digestive Denial - After deployment, pick one piece of terrain on opponent's side that was NOT paid for. Cover save worsens by one. (4+ becomes 5+, etc.)
6 - Adaptive Biology - Warlord gains FNP (5+) on next movement phase after it suffers a wound. (For rest of game)

(As before, Fail Ld and be out of synapse for this to happen)
Instinct (Lurk)
1 - 3: Survive. The unit is treated as having failed a morale test and immediately falls back
4 - 5: Seek Cover. In the movement phase the unit is not slowed by difficult terrain, but still must take Dangerous Terrain Tests. In the shooting phase, the unit can run, but can only shoot if it is in a building or area terrain. The unit cannot charge in assault.
6: Stalk. As 4-5, but gains stealth.
Instinct (Hunt)
1 - 3: Burrow and Hide. The unit immediately goes to ground. If there is a fearless model, use results from 4-5 instead.
4- 5: Prowl. In the shooting phase, the unit cannot Run and must shoot at the closest enemy unit within range and line of sight. If there is no viable target, do nothing. Cannot charge in assault.
6: Destroy. As Prowl above. Also gains preferred enemy.
Instinct (Feed)
1-3: Cannibalistic Hunger. Unit suffers hits equal to number of models in the unit. Use majority strength, AP -. Wounds allocated by owning players. Armour saves okay, but no cover saves. Unit can do nothing. If it is a single model, use devour (as if rolled 4 - 5).
4-5: Devour. Cannot shoot or run. In Assault, must charge closest enemy or do nothing.
6: Kill. As above, but gains rage.

Deep strike, Instinct (Feed), two pairs of ST. Any Ravener can exchange one pair of ST for Rending claws at 5 points per model.

Can take Spinefists (3 pts), Devourer (5 pts), Deathspitter (10 pts). One Ravener in the *army* may be upgraded to Red Terror for 85 points:

Two pairs of ST, Prehensile Pincer (see that tail list I posted up there), Deep Strike, Swallow Whole (if it hits with 4 attacks, it auto kills a guy. The guys gets his invuln save and that's it)

Rules are a bit long winded, but seem about the same.

Pyrovore looks about the same as well. Template weapon, acid maw, explode when you kill them, etc.

Lash whips (+3 Init), confers shrouded on self and wihin 6'. Poisoned 2+, Instinct (Feed). Toxic Miasma: Usable once per game, in assault. During init step 1, all enemy units enaged in combat take hits = models in base to base. Hits are Str 3, Ap -. Poisoned and ignores cover.

Swarmlord generates powers from Pwers of the Hivemind.