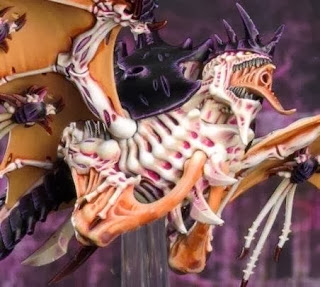 Greetings everyone, I'm Geist, and as has been mentioned before I will be handling rumors on Talk Wargaming. First up, some interesting stats for the Tyranid Crone as well descriptions on some "Unique Biomorphs" that will add powerful bonuses to specific units within an army. Remember that these are unconfirmed rumors and thus requires a healthy dose of salt with each serving.

Unique Biomorphs (one per army)
-"Uber-Synapse":  An HQ only biomorph that has a reduced radius for synapse, but grants Eternal Warrior to bugs within it.
"Uber Carapace" Armor Save 2+, Eternal Warrior on non flying creature.
-"Uber-Boneswords": Hive Tyranids/ Tyranid Primes only: AP:2 and heals the user a lost wound for each wound inflicted on a 5+  For Primes and Tyrants. Regular boneswords are AP3 by the way.
-"Bio-flamer": Hive Tyrants/Tervigons only, Template, AP:3
-"Spore Barrage": Poison 3+, Large blast, Ordinance, Remains in play, Range:Unlimited, One-use only.

It appears that many models in the Bretonnia line have been quietly taken down from the Games Workshop website, including nearly all of the Rare Units section(except the Grail Knights), and the Bretonnian Battle Standard Bearer, which from what I understand is a vital unit for Bretonnian Armies. It remains to be seen whether this means that they will be getting an update(since Dark Elves had a similar thing happen to them right before their update), or they are folded into another army(eg Black Templars for 40k).