Tyranid Rumors: Points, Stats and a stab at their Accuracy 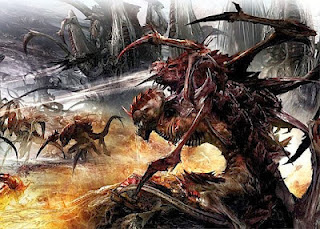 One guy posts some rumors he's discovered, another guy calls bullshit. Tends to happen a lot, but since no one can confirm either's accuracy(no matter how good their past record is) until the actual codex is released, they both have to be considered. So here they are, all I can do is post them, it's up to you to decide who you want to believe.

via Tyran on Dakka Dakka


I just have a nice chat with a player in Vassal.
He supposedly got to see the new codex in a veterans tour at Warhammer World.

Rumors:
Tyranids can't take fortifications, but have +1 HQ, +1 Elites, +2 Troops, +1FA and +1 HS
Tyranids are going to have 3 supplements: Leviathan, Kraken, and Jormungandr. It is going to be a swarmy one, a nydzilla one and an infiltration one. But GW hasn't started to write them yet so anything may come.
There are advanced, basic, experimental, etc biomorphs.
Shadow in the Warp is a 12" bubble of -4 ld for enemy psych test, but also grants units the 5+ to deny.
No way to make Warriors viable, according to him the Eternal Warrior rumors are wrong.
Toxins Sacs may be the same, according to him the wording was poison 4+ to the attacks, not making any distinction between CC and ranged.

Flesh Hooks are assault grenades and d6 S6 ap5 rending and precision shoots.
Adrenals Glands give Furious Charge and the +3" run.
Scything Talons give an additional attack.
No Doom of Malan'tai, Parasite and Mycetic Spores.
Regeneration gives IWND.
Catalyst gives +1 to FNP and IWND.
Venom Cannon is S9 ap4 2 shots.
Deathspitter is back to being a blast.
Barbed Strangler is st6 ap5 and must take a S test or take d6 st4 ap3 hits.
Stranglethorn Cannon is the same but S8 and pinning.
Acid, explosive and poison spore mines are back.
Any Prime unit can be HQ, this includes Warrior Prime, Trygon Prime and Old One Eye.
Only 1 Psych Powers chart.

Carnifex:
120 points
Got a new page of upgrades.
2+ save for 15 points
1d3 Hammer of Wrath attacks
Can attack the occupants of a transport after destroying it in CC.

Tervigon:
170 points
Mastery Level 2
Can take 1 of 3 upgrades for spawn: 4d6 spawn, or the no run out for doubles, or all gaunts (note that it includes Termas, Hormas and Gargoyles) benefit from Toxin sacs and Adrenal Glands
Also you can customize the spawn options for a cost, for example spawning hormagaunts or spinegaunts

Deathleaper:
All attacks are precision
Keeps the 5+ rending

Trygon Prime:
Gaping Maw experimental biomorph: If half or more of the attacks hit, a random model in b2b takes an Initiative test, if fails it is removed from play. According to him it has no limitations, so it can eliminate a Riptide or anything else.

Mawlocs:
140 points
1d3 blast with the ignores cover rule for its attack from below

Venomthropes;
30 points:
Grants shrouded and defensive grenades in a 6" radius


I'll temporary leave my cave to comment on those.
personally I'd expect something accurate in the coming week i.e. something this pile of text is not.

Adrenals Glands give Furious Charge and the +3" run.
Opposes all what we know for example about Horms = disproven.
Unless there are different effects for monstrous creatures and such and different for little fellas,

Born in the Skies: Can't be grounded
No idea.

Hive Guard:
New gun is Spike Cannon, S7 ap4 2 shoots with Skyfire, enemy must reroll successful grounding tests
From the description of the weapon I doubt it can be skyfire. The weapon, but it doesn't mean that the unit will not be able to from its basic gun.

Lost Blinding Venom
No, still have it.

Hormagaunts:
5 points
Bounding Leap is charge after running
No it is not.

Swarmlord:
Mastery Level 3
Yep, what I said before.

Venomthropes;
30 points:
Nope. Add quite much to the cost - about the cost of a Marine.

I know nothing much above what we already know by this point, but clears some air.