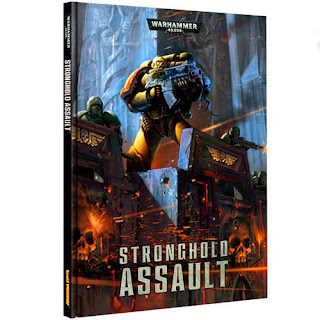 It's time to break some strongholds......


Yes, the book has dropped and it's time to break open this book and see what's inside.

To keep this simple I'm going to each section of the book in order, cover what's in each section, my thoughts and then close out this look into the book with some final thoughts. No points costs, so I apologize in advance if you were looking to skip out on needing the book completely, I just don't want to get sued.

Before we get too far I want to cover the book itself. It's a hardback, with the same kind of raised embossing we see with the codexes. The paper is the same quality with full color images we've come to expect by now. No complaints here.


Fortifications of the Imperium

This is our real introduction in the book (yes the book has an Introduction, but this really does the job establishing the feel of what this book is for) and it covers the setting and how Fortifications are used in it, at least in brief. Forging a Narrative makes an appearance, mentioning that Chaos would desecrate then and then reconsecrate them to their dark gods. Orks get a mention about them salvaging and modifying anything they get their hands on.

Basically it's to inspire some conversion ideas but doesn't really force the idea down your throat.

Nothing particularly too exciting here, but it's just the introduction so no harm there.


A Galaxy Under Siege

Do you like 40k lore? Then you might want to get a look at this if you get a chance. Battle of Macragge, Palace of Thorns and Storm of Iron get mentions here, and more. Special mention goes to "The Fellguard Incident" which gets a two page spread to tell it's events as the Imperial Guard and the traitors of the Fortress World of Kelthorn fight it out. I won't spoil anything, but I thought it was pretty good.

Lore fans might want to give this a look, everyone else may choose to skip this.

First off, this section starts with the following statement:


The following section introduces new rules that are required to use the fortifications found within in your games of Warhammer 40,000.

Now, to be clear, this is a Supplement for the main rulebook, not an Expansion. You can leave it out of your games if you want, but it's right there with codex supplements in how it's used.

Massive Fortifications can have an Armour Value of up to 15 and have the Mighty Bulkwark special rule, which reduces damage rolls on the building damage chart by -1. As the book points the obvious here, this makes them harder to destroy.

Fortification Networks are multiple fortifications that are purchased as a single FOC slot. Which buildings are used as well as if they have to be connected or not is covered by their datasheets, though you can still place them next to each other even when they don't have to be. And no, you can't slap just any combination down and call it a Fortification Network.

Destroyer Weapons are in this book, as are votrex weapons as well as a class of weapons I haven't seen before called Primary Weapons who roll two dice for armour penetration rolls and take the highest.

Not much to talk about here honestly, the destroyer weapons are the the same as apocalypse, to include use of the Apocalyptic blast template, and vortex weapons still make things go missing if they get hit with.

Well that solves the Riptide problem I suppose, but I'm going to recommend not springing Destroyer Weapon fortifications on your friends on a game if you want to keep them.

Yes, building rules are getting an update and this alone makes the book pretty handy I think. Honestly this section gives a pretty good reason to get a copy of this book, even if it's just to share as a group at a club level. Let's take a quick look at the changes in brief:
A Forging a Narrative section also talks about deep striking and buildings and some ideas how it can be handled but ultimately leaves the choices up to the players.

So a fair amount of changes here that make this book a bit more important than what it would seem previously. A fair amount of it clarifications, and some of it is a straight errata from the way the core rulebook rules work.

Now there is no requirement to use these new rules, but if the changes interest you then the book is likely more your style. Just don't expect everyone to feel the same way of course.

Yes, fortifications can purchase upgrades, but only if they're being purchased as part of your army. Additionally depending on the size of the building you may purchase one (small), two (medium) or three (large). These must be declared the first time the building is occupied.

Additionally if your building is a multi-part building the upgrade only counts for the part it was purchased for, the other parts have to purchase them separately (as they are essentially different buildings). Each part of the building (excluding battlements) can have different upgrades if you wish. The upgrades for Buildings are:
The upgrades for Battlements & Battlefield are purchasable pieces of Battlefield debris that must be emplaced on the building's battlements or wholly within of 6" of their fortification. Includes:
Now obviously a lot of new stuff, plus a few classics here. This book adds a number of new options to the table and I think it really helps the Fortifications feel a lot more varied and really helps increase the ways they can be fielded.

So to make this easy I'm going to just go through the list, and if the item is a Fortification Network I'll list what it consists of. Also, a few of these don't have images suggesting that they may get future releases. I'll note those too. Some of these have special rules as well, but I'm not going to dig into those as honestly I need to keep GW's lawyers happy by leaving at least some of this a mystery. So here we go!
Now that is a lot of stuff to choose from, and some nice combinations of  options means that what you bring can really scale with the size of the game. Which is good because these will eat into your points total fairly quickly.

Three new missions to play with a new FOC based on who is the Attacker and the Defender. Defenders may take up to 3 Fortifications, but must purchase at least one and otherwise follow normal FOC rules. Meanwhile, Attackers gain a fourth Heavy Support slot to fit more bunker breaking options into the army.

The missions are:
Honestly I don't see anything in here I don't like. The missions add some spice to the game and allow for a number of new, or classic scenarios to be played. I really dig these.

This book really has one market: people who like Fortifications. Maybe even like them too much. It's not a bad book, and I like the updates and all the new options. It's nice to see more of the terrain pieces GW produces being given rules.

That said this book is a lot of GW's other products: if it sounds like something you want, get it, otherwise skip it and share your friend's copy when they want to use the rules from it. It's not for everyone and like all supplements it's a real case by case basis on if this will be worth your money or not.

Also, if your into playing tournaments, make sure you check with the TO well in advance before you go dropping a lot of money on a Fortification Network or the other things in this book.