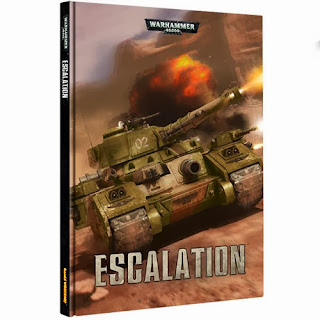 Okay, maybe not literally, but this book does add super-heavies into the main game and that is a big step up from what we've been playing.

Now, I'm sure there are a number of people are aren't looking at this book as the new best way to make their friends hate them. So aside from those players who just like to watch the world burn I'll be covering this book. Why for you guys? Because the people who want to employ the new, best way to make their friends mad already bought the book and are trying to decide which D-Weapon platform they should pick to build an army around.

That covered, let's just go ahead and get the obvious joke out of the way really quick:

So now that the Anchorman references are out of our system let's get to the book shall we?

I like to stay organized, so I'll be tackling this book in order by section, covering each, adding my thoughts and then wrapping it up with some final thoughts and overall opinion. I won't be covering special rules in depth or points values at all though because I like not being sued.

If you've seen any of the 6th edition books you have a good idea of what this book basically looks like. It's a hardback with full color pages, and the same quality of paper used in the codexes. There isn't anything I've got to complain about here, nor much more to say so let's move on.

This is what I feel is the book's real introduction as it sets the stage of the setting, gives us a feel of the kinds of things these monstrous war-machines and gargantuan creatures are and how they tie into their armies.

The lore section of this book is shorter than in codexes or even the short section in Stronghold Assault, only spanning two pages and covering the tale of Obus Prima, a manufactorum who attempted to shirk the yoke of the Imperium

If you're interested in the background parts of these sorts of books it's worth a look, but I have a feeling a lot of people will be skipping it.

First off, before we dig into the rules too deep, this is a rulebook supplement, not an expansion. So much like codex supplements it's completely optional for use, but it doesn't have to stray from standard games to be used.

The book adds a new FOC slot called Lords of War. Unlike the Lords of War found in the Horus Heresy series they are not bound by any points restriction. Things that can be taken in this slot are restricted to Super-Heavy Vehicles and Gargantuan Creatures in this book.

And before people ask, yes there are Forgeworld models in this book, just like there are in Apocalypse. So for those who like to argue that somehow the main game and Forgeworld are separate things, that gap you've been imagining got a lot smaller with this release.

Apocalyptic Weapons, Destroyer Weapons, and the other rules regarding these vehicles are here as well. So if you've seen those rules, then you're familiar with these ones as well.

Now honestly I think the book is pretty interesting from the get go, despite this section only being to serve as a reference point for these rules (and preventing people from needing to have the Apocalypse book handy to use them).

It's pictures of models. Well, to be more specific of the plastic super-heavies GW sells. If you like looking at them then you'll like this section. If not, well skip on to the next one.

So this section starts off pretty straightforward:


If you wish, you can take a Lords of War detachment when choosing your force. This is an optional detachment just like Fortifications and Allied detachments, as shown in the Force Organization chart opposite.

And just like that we know that this is not here to soft shoe it: this book is for normal games and is as valid as any option you can take. An important thing to note is that the Lords of War must be taken in the Primary Detachment only, and if it's a transport can only carry models from that detachment. And yes, it counts as if it were from the same codex as your primary detachment too. So no, you can't just slap whatever on the board (at least not without a fair amount of homebrew) and say your Berserkers are carting around in a Stormlord this week.

Honestly I feel these rules go a long ways to trying to help balance out the game a bit for those occasions were only one player has taken a Lord of War. Especially the Warlord Traits table which is designed to give your army advantages when fighting against the Lords of War.

So let's take a look at which armies have access to what options. Now before we get too far, I do want to lay something out really quick before anyone gets upset with me: neither Adepta Sororitas nor the Inquisition have access to any of the Lords of War in this book. While I understand these aren't really fully supported armies at the moment, this is a bit of a slap for anyone who primarily plays them books. So if you really want to field your own Lords of War make sure you work something out with your opponent or event organizer ahead of time to save yourself the grief.

That aside, let's take a look at the options.

Imperial Guard:
Guard players rejoice, you have the most options out of anyone in the entire book.

Space Marines (yes all of the Loyalist ones):
Sorry Astartes, only one option for you. Not that it's a bad one, but it is worth noting that that it's the only one you have.

Forces of Chaos (Chaos Space Marines and Daemons):
Once again, only one option here. And no Super-Heavy Flyer options for the Chaos Marines either.

Orks:
Sorry Ork players, you don't get rules for looting all the other army's options. Shame because that'd be kind of awesome.

Eldar and Dark Eldar:
Yes, both of the pointy eared armies share the Revenant.

Tau:
For the speculators I saw asking about this, it's the one with the Drone Rack.

Tyranids:
Once again, another army with only one option given.

Now obviously there are a lot more options out there, such as Warhound Titans or the Orca. Unfortunately that'll have to be handled by coming to an agreement with your opponent about any additions or changes you want to make (such as having your Orks drive a looted Stormlord into battle).

But seeing as you need to make a fair number of agreements with your opponents to play the game anyways playing around with your options or homebrewing up some new ones to play with shouldn't be a huge issue for people wanting to play with this book.

I will say I was highly disappointed that the Adepta Sororitas didn't get a tracked cathedral Super Heavy with this, or at least access to the Guard options but with how often they get left out in the cold it wasn't too surprising.

So, good, but not perfect and leaves a lot of room for house rules and homebrew.

Six new missions are in this part of the book, adding quite a bit more to the game. These open up if either, or both players have Lords of War in their army and are alternative missions to those in the main rulebook. They are:
A lot of really neat missions here. I really like how nicely they've scaled some of these victory conditions up to match the scale of the game that's being played (and the threat of the Lords of War themselves).

Unlike the Altar of War missions, these are a new kinds of missions with a lot of specific rules for them that aren't rolled for but agreed upon between the players. They are:
Honestly this is my favorite part of the book. The missions are creative, and I really love the Defiant to the End mission because it seems like a lot of fun.

The book is good, but not great. It's packed with a fair number of options, but could have had a lot more, especially for the armies who only option is from Forgeworld. It's not unsalvagable though as the rules are great, the idea is really cool and the few short comings it has for unit options can be solved by some friendly house ruling.

That said this book isn't for everyone. Not everyone likes the idea of super heavies in their games and some groups won't want to play it period. If you are the kind of person who likes this idea, and has friends who want to play it I'd give it a go. It's a lot more organized than Apocalypse, and easier to manage, even if whole units are still perfectly capable of disappearing into a puff of greasy smoke. Played with a friendly attitude this book can be a lot of fun, but if played by someone who just likes to grind his opponents to dust every game it may be less so (unless you just play Defiant to the End everytime!).