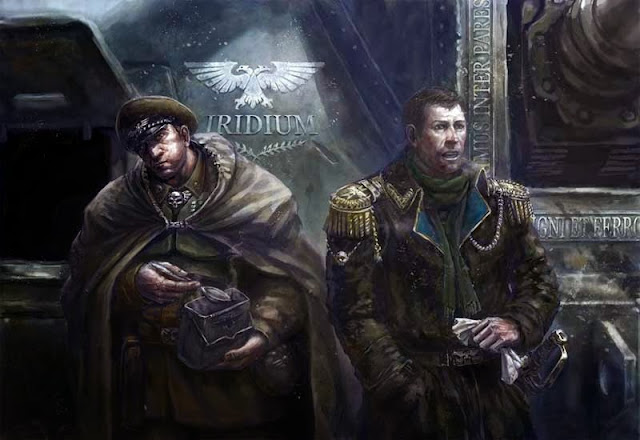 
As we're nearing the new year and the release of the next Imperial Guard Codex I think it's time we get some boots on the ground and cover what Imperial Guard rumors have been mentioned so far.

Some of these rumors are from a few months back so a liberal application of salt may be need until we're closer to the launch and more solid information becomes available.

The latest updates are in bold red.

The following is a summary of all the rumors out there. Now, remember that these are all "rumors" and nothing is set in stone. The majority of these are from a playtest document that was floating about a few months ago and as such will be subject to change - a lot of change most likely.


via a reader that must stay anonymous on Faeit 212


Hello Natfka, I am not normally a rumour guy.
However, I have today seen (and held) something I was not supposed to.
"Astra Militarium Bullgryns"
Shrink wrapped box ready for sale; I don't know what that implys about
release time.
Three Plastic "Bullgryns" which seem to be armoured Ogryns with large
riot style shields. Looked to be on the same bases as the Space Marine
Centurians. They are painted in a new looking blue/gray urban cammo.
They have armoured looking torsos and loin cloth type things made out
of tank tracks (!). They also seemed to have cybernetic enchancement
(ala Boneheads).
Looking at the back of the box, there was a small picture indicating
they could also be built as traditional Ogryns, which retain there
T-shirts and Ripper guns look. The Orgryn on the back had a Green T
shirt.


via an anonymous source from the Faeit 212 inbox.


Regarding the Leman Russ:
Vehicles & Ordnance Weapons: Unlike other units, vehicles can move and fire with Ordnance weapons, but can only make Snap Shots with its other weapons that turn.
A vehicle that remained Stationary can fire all of its weapons, including Ordnance weapons.

An interesting note:
Ignore cover USR: the target receives -2 on it's cover save. Template weapons ignore all cover saves.
Vehicles ignore the "Gets hot" USR.


New plastic tank based heavily on the Heresy-era Malcador. Large kit outsizes the Land Raider (way smaller than a Baneblade) Multiple variants in the kit.

A NEW dogfighter flyer arrives, that is NOT an existing known model.

New Plastic Stormtrooper/Veteran kit will build a minimum sized unit. Kit includes a TON of optional bits to individualize your squad as well as bits to dress up existing Cadian ranges.

These rumors come to us in multiple sets, and we have ordered them from most trustworthy to least based on a variety of "truthifying methods":

Knight Paladin - Taller than riptide, not as tall as Wraithknight. Vanquisher cannon and Uber-chainsword are standard load out. May upgrade to Punisher Cannon, Uber-Fist with Inferno Flamers

I did have a tiny look behind the iron curtain of GWs privacy policies, and I was able to see some mockups of the new veterans/stormtrooper boxed set, and it would be an amazing kit to build warbands or stormtrooper squads. Also I saw a model that appeared to be an Inquisitor, and was wearing a long cloak and armor. I could see GW allowing stormtroopers as a troop choice to induce additional sales of the new kit, which, frankly, floored me. The details were great, with kasrkin style armor, and all sorts of weapons including hellguns, sniper rifles, special weapons, a cool missile launcher, a bunch of sergeant options, bolters, and lots of shotguns that managed to not look like scout shotguns. Also, the bolters did not look like marine shotuns, they were a little more human sized. Some of the poses were also amazingly dynamic. Some were stoic standing poses, while a couple were very John Woo! There were also a lot of extra bits, poches, packs, grenades, knives, some scanner like equipment, and what appeared to be night vision goggles. If i were a puppy, I would've piddled onm the rug, and it was a supreme act of will not to grab the models and run for the door. Apparently, they have also been ready for some time. Please dear God, let these see the light of my hobby store soon and I will have at least 5 boxes! This might even revitalize my Guard army.

Oh, and there were a bunch of heads! respirator heads, heads with berets, bald heads, heads with mohawks and crew cuts. Most were scarred, and one had an eyepatch, while another had a disfigured eye with what looked like claw marks, one head was smoking a stogie, and there were two heads with berets. There was even a knife that looked like a trench knife with raised knuckle dusters. There were scopes, a hand radio, and a bunch of bits for the bases including plants, a snake, and some ammo cans and satchel charges. There was even a hand holding an entrenching tool (shovel to you non-military types). There were a few holstered pistols, and as a delightful surprise, there were also autoguns in addition to lasguns, and there were bits for pistol and close combat weapon troops, although few were chainblades. There was a demo charge, melta bombs, and camo cloaks. I was very, very impressed. The attention to detail was phenomenal.

-‘Mission Objectives’ are potentially a new special rule for the Imperial Guard, although my channels are a little dry on this front, one can only begin to imagine what they do. I heard on the grapevine, that this special rule would allow even sergeants, to order ‘minor orders’ to their own unit.

-Formerly Forge World dominated vehicles will take a tour in the Imperial Guard codex. This means we could see such units as the Forge World Destroyer Tank Hunter as part of the upcoming codex. Although one finds it extremely unlikely they will receive a new plastic kit.

-Headquarters units have seen a massive shake up. Above the whole organisation, some units have been deleted, others modified. You start by buying a command squad, this is then changed by swapping the officer for a commissar, if one wishes too. The three present advisors have been retained, with the addition of the Primaris Psyker as a command squad advisor.

-Ministorum Priests are back in the same manner as before, this time though it has been rumoured they increase the ranged output of the unit, as well combat potential. Maybe in the form of the ‘preferred enemy’ special rule, who knows?

-The mighty (or not so mighty Enginseer) has stayed relatively the same, except for the transition from HQ to either Elite or Heavy Support. But what excites me the most, are their roles on the field of battle. Apparently they will act much like Royal Courts in the Necron army, bought with certain upgrades, then attached out to other units, to confer certain benefits to that unit.

-In terms of repacking, it is believed that special weapon squads will receive their own box set. This is also rumoured to be extended to veteran squads and heavy weapon teams. Coming in boxes of five models, with a wide variety of special equipment.

-Moving on from the veteran weapon squads re-boxing, it is believed that they will be changing their position on the battlefield. With smaller squad sizes, veterans seem to be taking a fire support role, that focuses on battlefield specialisation.