How to Paint Orks 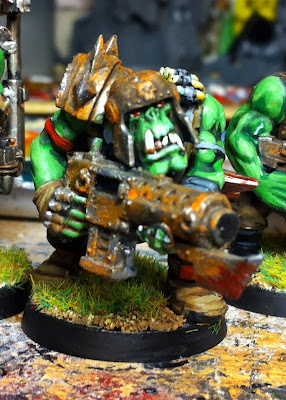 There's been a lot of talk lately about Orks showing up early in the new year. If you're an aspiring warboss, a quick and easy painting guide is a gift from Mork (or possibly Gork) himself-- one of the biggest challenges for Ork players is producing a good-looking model for the tabletop that doesn't take a lot of time per model. There's a lot of da boyz, after all...


How to Paint Orks


So to get things started, I spray da boyz with black spray paint. 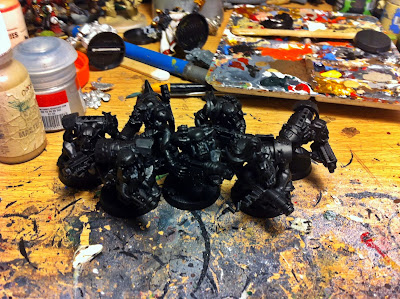 Then, I start by applying a medium brown to some of the cloth areas, the boots, and any other leather areas. I used Reaper Master Series Driftwood Brown, but really, any medium brown works. Games Workshop's Baneblade Brown is a pretty close match. 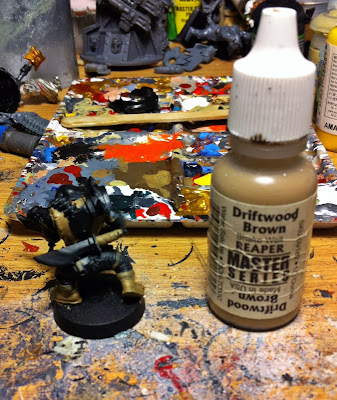 Next, I paint all the metal areas with silver. I prefer the smoother finish of Reaper Master Series' metallics to Games Workshop's, and I used Reaper Honed Steel here. GW's equivalent is Ironbreaker. 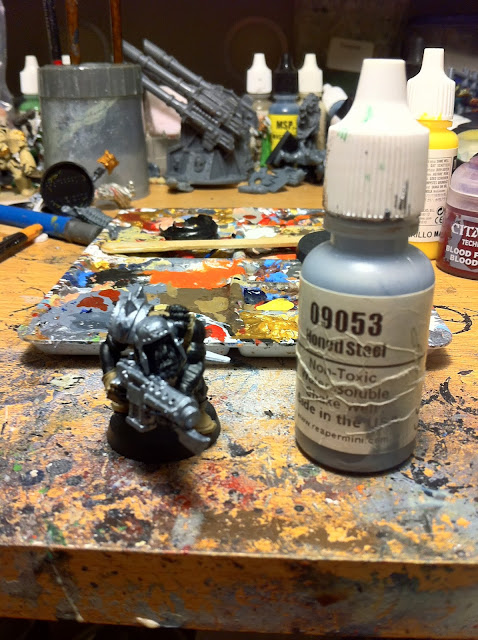 With the brown areas and the metal taken care of, I apply a relatively heavy wash of Agrax Earthshade to the whole model. The brown wash, as opposed to using black, gives the metal areas a worn and dirty look, and shades the brown leather areas nicely. 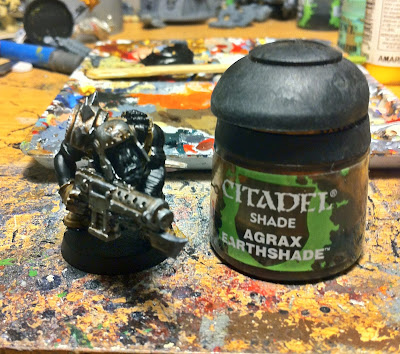 The new Technical range from Games Workshop are awesome. And my favorite of them by far is Typhus Corrosion. I've been playing with it on pretty much every model I've painted lately to see all the different uses it can be put to. On the Orks, though, it's pretty straightforward-- just water a little down and apply it to the metal bits. It can be quite strong straight out of the pot, so unless you're going for a completely rusted through look to whatever you're applying it to, be sure to put some on your palette and add some water first! 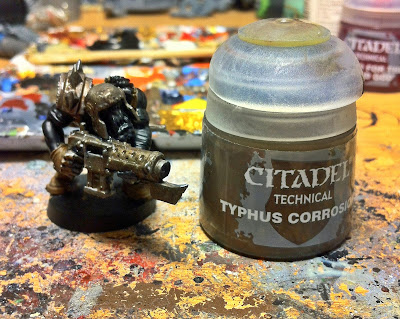 I've found Typhus Corrosion takes a while to dry. So we'll tackle the Orky bits now. I paint the green skin with appropriately-named Warboss Green. Be sure to get a smooth, even coat-- you may need two or more layers over the black. 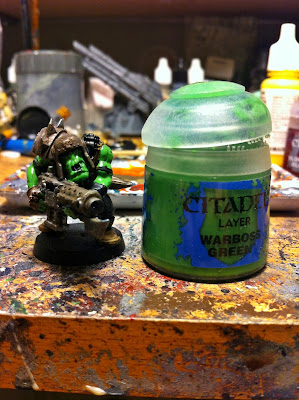 At this point, I needed to wait for the green to dry before proceeding further with it, so I used a bit of the new Ryza Rust to add some more weathering to the metal bits. The Typhus Corrosion/Ryza Rust combination has been heavily pushed by Games Workshop, and while I normally find their hobby suggestions to be lackluster at best, this really is an effortless and great-looking pairing. 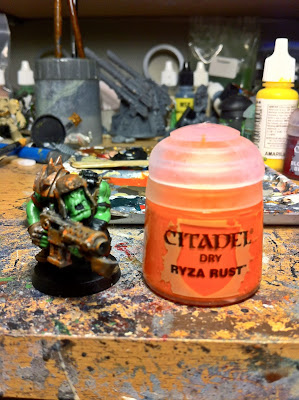 Color theory time! When shading the Ork's skin, I like to start with Baal Red (which is now Carroburg Crimson, but I use the stuff so rarely that I still haven't needed to replace my pot of Baal Red with the new stuff yet). Red and green are complimentary colors, which means they sit opposite each other on the color wheel. When you layer one over the other, you get a much bolder, darker effect. The red won't ultimately show on the finished model, but it makes the next step really pop. You don't need a lot on there-- I water it down about halfway from its consistency out of the pot for this. 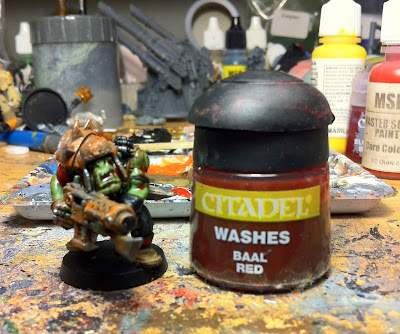 I highlighted the black areas with grey at this point while I waited for the red wash to dry. Then, once the red wash was dry, I applied Biel Tan Green. I applied it fairly heavily. As you can see, the red from the last step is not visible as red, but in conjunction with the green, gives a much smoother transition into the recesses and a slightly more "organic" feel than just straight green shading does, I think. 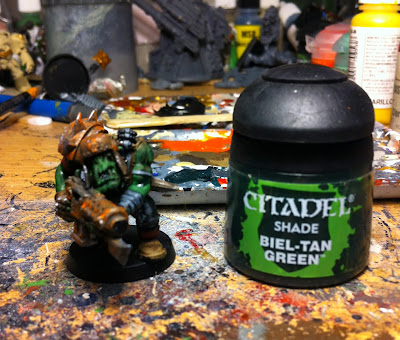 When the green wash is dry, I add highlights. I start by adding a solid layer of Warboss Green first, making sure to leave the recesses visible. I then add a layer of roughly 50/50 Skarsnik Green and Warboss Green, and then Skarsnik Green on its own. Finally, I add light highlights on the most raised parts of the Ork's skin with Gauss Blaster Green-- basically, I hit the lips and any veins that are popping out with a thinned layer of it. If you can't get ahold of Gauss Blaster Green, just add some white to Skarsnik Green and you'll get something pretty similar. 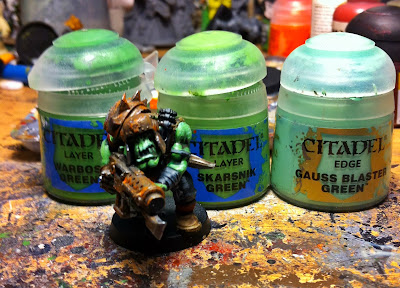 All that's left is to base our Ork Boy, dot the eyes in, pick out any remaining details, and toss him in with the rest of his mob! I dotted the eyes with a bright red, picked out the teeth with Reaper Driftwood Brown and then layered them with white, and picked out the bullets on the Ork's shoulder with gold. I also applied some Blood For the Blood God to the sharp bitz on the gun and the choppa on his back, and carefully lined in the gums with it.

All in all, this process takes about a half hour. If you batch paint boyz with this process, you'll have your Waaagh! looking sharp and ready for battle in short order, which means you'll have more time to krump 'umies and drink fungus brew. Or whatever else Orks do these days.