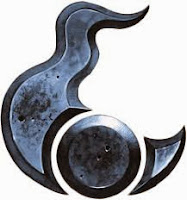 If you haven't seen them yet, at the time of this writing, there have been a two new releases coming out soon that promise to change the way the game is played. I'm speaking of Escalation and Stronghold Assault, two new books that promise to add Superheavies into every army, and expand how fortifications are used in the game respectively (and both of which are getting covered for the curious who don't want to drop their money on things blindly). But that isn't the full list of changes we're seeing this week because the Digital Editions side of Games Workshop has been very busy themselves as well. You see they've been running an Advent Calendar in conjunction with the Black Library and are releasing stuff every day from the 1st to the 25th of December.

From this we've seen that it's added Dataslates (basically datasheets for regular 40k that add things to an army, much like how Forge World does) to the game. These new additions add individual models or units, (the first of which is Be'Lakor, the first Daemon Prince) or formations (the first of which is the Tau Fireblade Support Cadre) to the your army.

Even if we don't see a large amount number of these Dataslates added (though it does look like all the Christmas box sets are getting one), we now have a way for GW to regularly inject new things into an army to give them more options without adding a new book.

Yes, it seems Death from the Skies in 2012 was really only the beginning for where the game was going: we're looking at a company that is not looking to wait for years to pass to add stuff to an army, effectively changing how it's played.

So what does this mean for the game exactly?

Well now we're looking at a game that doesn't just have codexes that come out once every 5+ years, but also has codex supplements, allies (not to mention the new mini-dexes that add even more allies options to the game), Stronghold Assault adding more rules and options for fortifications to the game, and Escalation potentially adding in Superheavies it really seems like GW is daring the tournament scene to try to keep up as it keeps coming fast and heavy.

As a former competitive player I know trying to keep up on all the changes is basically a nightmare but as someone who doesn't care about it anymore I also see it as an attempt by GW to break players out of the rut that we've been in.

With so many more options being added to the game so quickly and so often it really feels like GW's intent is to deal with the competitive side of the game by burying it under a constantly shifting meta. For less competition oriented side of the game though it seems that they're trying to really capture, encourage and even reward themes in armies (something that the Apocalypse formations are said to be doing is rewarding players for building different thematic options for their armies, so I see the regular 40k option as doing the same). Honestly I think it's outstanding that there is stuff being put into the game that does more that just reward the competitive player for finding the newest and best way to make the next Screamerstar or Quadtide.

That aside, I don't know if this really can damage competitive play since they already exist in a realm of alternate rules for a number of things (terrain placement, time limits, prizes...). Because of this it seems safer to bet that competitive play will be mostly unchanged as they'll likely keep the options from Stronghold and Escalation out, along with the formations (since they don't follow normal allies or FOC rules), while the game outside of tournaments will drastically shift and keep shifting as more and more is released.

The next question then is: if GW is trying to kill competitive play by effectively drowning it in these massive updates that keep flooding out, is it the right course of action?

Honestly, and I mean brutally honest levels here, no. No, the game shouldn't be trying to run from competitive play, but instead trying to find a better balance. Since I'm being honest, the game, as fun as it can be, is far from perfect and is showing signs that perhaps when 7th comes out that a large number of things need to be rebooted. Points costs come to mind as the most blatant as everything is shifting to smaller and smaller points basically wrecking any sense of scale or difference between these models we should be having. The imperfections don't keep me from having fun though, but it doesn't mean I don't see the cracks either.