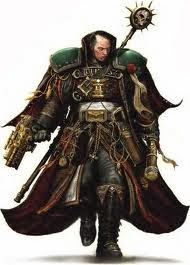 Well it's time to start judging this book for heresy...

That's right, the codex is out, and it's time to take a look! I won't be doing and kind scores on this (because honestly arbitrary points systems are pretty dumb), I'm just going to try and lay my initial impressions out and let you decide if you like the sound of it or not.

Before we get any further, no you do not have to own an iPad to download this. I used one because I rather like the iPad version but you can either download that in iTunes and see it there if you have the most recent Mac OS, or you can get one of the versions from the Black Library (which allow you to also print a copy with their purchase agreement). Additionally, if you're looking for a cheaper copy, the Black Library one is the one you want because that one is always cheaper. Just get yourself an epub reader and you're good (I have one that's an extension in Firefox, but I've also heard good things about the one Adobe has. Both are free).

I only mention this because it's been a year now that the ePub versions have been for sale and people still ask about this. So with that out of the way let's get into the real meat of this thing, shall we? I've broken this down into sections so if you're looking for specific things just scroll down until you find the section you're interested, otherwise feel free to look at it all in order.


A lot of good stuff in here honestly. If you've ever wanted to know all there is to know about the Inquisition then this book has you pretty well covered.

And odd not is the Ordo Hereticus no longer mentions a Chamber Militant, so if you were looking for one, it's gone now.

Something new (for me at least), is the fact that there are Ordos that watch over the Administranum and Mechanicus.

The Inquisitors of Renown is a neat section that covers a number of Inquisitors both from the game and as well as ones who appear in the Black Library books (such as Eisenhorn and Tyrus). Some really neat stuff to inspire you with ideas here.

I honestly skimmed through most of this so I could get to the meat of the book, but if you're a diehard Inquisition fan you might want to take a look.


The art is good. A lot of classic pieces return as well as a number I don't recognize that I can only assume are from the Dark Heresy books.

As for the models, there isn't anything to write home about. Nothing new appears in the book, and most of what does was likely painted a long time ago.

One of the big questions was how the allies rules where going to work. Well...they're different. Rather than try to explain let me quote the codex here:

The Inquisitorial detachment works as follows: you are required to take 1 HQ and then you have the option of taking a 2nd HQ and up to 3 Elites choices. Yes, you can have an army of a lone Inquisitor if you so wish.

Anyone else getting a feeling of déjà vu regarding some rumors last year that we'd be getting books like this?

One noteworthy thing to mention if you didn't notice it: the book lets you ally Inquisition to Inquisition. Guess it's so you can show two Inquisitional forces working together. Though because of their rules only the Warbands of your primary detachment count as scoring.

This has a neat trick actually:

To add to that, there are Warlord traits tables for Ordos Hereticus, Xenos and Malleus. I'm not going to give them all up, but I do think there is some pretty nifty stuff in here. As far as Warlord Traits tables I rather dig these.


Oh, and I don't think I saw a single one of them that causes Fear.

So many toys. I think someone had fun writing this section and seeing what they could cram in. I will admit that I got excited seeing all these toys. It was wonderful seeing all the options in the book (both on regular models and on their vehicles). I'm not going into every profile here, but I am going to list all the stuff that's in each section because it has to be seen to be believed.


Psychic Powers (yes they have a codex specific list):


There are only 3 Relics here, and each is a book. Apparently the Inquisition likes to do some reading.

Liber Heresius: A book that lets you take a leadership test at the start of any turn to give the Inquisitor and his unit one of the following special rules: Scouts (you roll the test after deployment but before the first turn), Split-Fire, Counter-attack, Fear, Hatred. Each rule may only be used once, but you can use each rule assuming you pass enough Leadership tests to do so.

Grimoire of True Names: If the bearer of this relic is fighting a Daemon in a challenge the Daemon suffers a -5 penalty to WS/I/and Ld (to a minimum of 1).

Tome of Vethric: Depending on which Xenos army your opponent is fielding (this includes allies) the bearer of this relic gains certain special rules (so if they have more than one Xeno army, like Tau/Eldar you gain two rules): Dark Eldar (Night Vision), Eldar (Split Fire), Orks (Counter-Attack), Necrons (Tank Hunter), Tau (Furious Charge), Tyranids (Monster Hunter).

Real quick I'm going to rundown who you actually to choose from and then give my thoughts on them:

For those wondering, no, the named characters haven't changed. They're identical to the Grey Knights codex options except for the Warlord traits that have been pre-assigned to them.

So the good news: The generic Inquisitors start at the low, low, LOW price of 25 points. Each. Which is good because here's the bad news: the only one who can purchase an Invulnerable sae is the Ordo Malleus Inquisitor who can take Terminator armour.

Not quite what I was hoping to see either. I think GW missed the boat just a little here. Well good thing they're cheap because those upgrades will add up and frankly I don't think I would want to spend a lot on an Inquisitor who has no Invul save. Stay away from anything that can hit you with S6 if you can help it too or POP goes the Inquisitor (well save for Karamazov, because he's kind of awesome like that).

Have you seen the Inquisitorial Warband from the Grey Knights codex? No? Alright, let me give you a run-down of what you can put in one: Acolyte, Arco-flaggellant, Crusader, Daemonhost, Death Cult Assassin, Jokaero Weaponsmith, Ministorum Priest (yes, he's just as awesome as he is in the Adepta Sororitas book), Mystic, Psyker, and Servitors (who have to test for Mind-lock if there isn't an Inquisitor in the unit).

Just like the Grey Knights codex you can have anywhere from 3 to 12 models in the squad of any combination you wish. And no, the Priest in this book is not an Independent Character, but he is a regular one.

Honestly the Warband isn't a bad option and can add a number of different things to a codex depending on what you field.

So that's the good news, now for the bad. Because the book allies to other books there isn't any sharing of these options with books like the Adepta Sororitas or Guard (so no filling your Land Raider full of Ogryns Guard players, sorry!).

On the flip side, because this book has it's own Death Cult Assasins, Priests and Crusaders (though Arco-flagellants can be an option if you're trying to go cheap) you can fill a Land Raider full of them, and ram it into your enemy's lines with some rather manic glee now. So there are options there if you so desire.

I'll be honest, this is not what I was expecting to see in the codex. That isn't to say that I dislike the book, but I can see now that it is not something that I have any intention as fielding by itself. Thankfully with options like the Red Hunters and even allying it to my Sisters there is a lot of room to play around with and I am excited to have just gained 2 more Battle Brother options (Inquisition and Red Hunters when I use the Inquisition) for my Adepta Sororitas. This really opens up a lot of interesting options for the future and I don't know yet where it'll take me.

I am looking forward to trying this out on the table and seeing what it does with my army, but I will say that this book isn't for everyone. You need to like the Inquisition as a faction and play one of the armies that they ally well with to really get a lot of out this army. But if you're an Inquisition nut, or you want to expand your allies options then this may not be a bad thing to pick up, especially for how cheap it is compared to regular codexes (and it's even cheaper if you buy the ePub version).