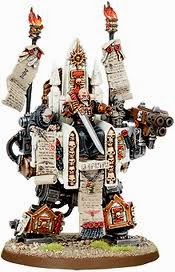 So there is some backlash about this new codex so let's dig a little into it...

As is fairly evident right now, everyone is not a fan of this new book (to be fair, when is everyone a fan of anything GW does?). As a disclaimer I'm admitting my bias up front here and say that I do like the new book but I can see where some of the dislike for the new book is coming from and I want to look at it and offer my thoughts on some things.

Despite what I'm sure will be claimed, this isn't an attempt at being GW's White Knight, just an attempt at taking a look at the grievances I see being aired from another point of view. I'm not trying to deny or devalue the grievances I've seen, just propose a possible reason for why things happened the way they did.

I like to use headers, so they're back. This time I'm using the header to give a brief synopsis of what I feel is the core of each grievance I've seen.

So it's no surprise by now that a lot of options in the book are pretty much identical as options in either the Grey Knights codex or the Adepta Sororitas codex (save for the Valkyrie which is an Imperial Guard option) with very few changes to them, if any.

Personally I think the big reason that the things that went in it stayed mostly the same because of Codex: Grey Knights. Now before the rage starts, Matt Ward isn't to blame (I think, as Codex: Inquisition doesn't have a credited author). Consider this: if the Inquisition stuff in this codex was drastically different (possibly better) book, what would happen to the Grey Knights codex?

Naturally the first one is incredibly unwieldy. First GW would have to go through and identify every single thing that changed and adjust it. If we saw full page erratas of the Grey Knights codex then they players would be required to a) know the updates exist and b) are responsible for keeping track of all the new information without losing the pages. I imagine tournament TOs would hate this too because it'd be easy for someone to fake the pages causing more issues if they weren't caught (sadly cheating does happen and it's not going away so we might as well admit that this would be a problem).

The second outcome is pretty bad on a PR standpoint and GW would get accused of money grubbing, and screwing people out of money and worse (even more so than some people do already). So that's not really a good choice either, because the last thing they need to do is to make their image worse.

That brings us to the third outcome which is a combination of the worst repercussions of the first two. First GW would basically give everyone who was playing the Inquisition in the Grey Knights codex the bird and then make them buy the new book just to field their stuff.

None of these outcomes are good for GW, nor are they good for us, the players.

So, in the interest of being objective what could GW have done differently/better? Honestly, not released this codex until Grey Knights were coming out with is probably the best thing they could have done differently. Now obviously it's too late for that now, so what can we hope for instead?

The best possible outcome I can see is that when Grey Knights get updated (either removing the Inquisition or just updating their options) that everything in Codex: Inquisition gets updated as a free update. The difference between this and the outcomes that were possible under the Grey Knights scenario is that it is easier to integrate that sort of mass update into a book without charging the players. I'm not promising this outcome, but I do think it's the best thing GW could do with this situation.

Well to be more specific, the rules for fielding Valeria are missing. Why? Honestly I don't have a definite answer on this but if I have to guess (and I don't, but I'm going to anyways) I'd say it'd have to do with GW's policy change following what happened with a lawsuit they had against Chapterhouse Studios. To make it short, the policy pretty much means that they're not putting things into the codexes that don't have rules. Now there are a couple of things that exist since that change that still defy this convention (Farseer on a Jetbike) but my only guess in those is that the options are so old that GW couldn't remove them without alienating customers.

Now Valeria is still in the Grey Knights codex so she isn't completely missing, but for the time being (which with no more female Inquisitor models available on the GW site, may be a while) she has been removed from this codex. If or when this is changed I can't say, but at the time I'm writing this, she is a character who will likely be missing for a while, much like Kyrinov from the Sororitas codex.


This Book is a Rip-Off!

Objectively speaking...no, I don't think it is. This, to my knowledge at least, is the cheapest codex to come out of Games Workshop since 6th has launched ($31.99 USD for the iPad, $24.99 USD for the Black Library version) putting it between $20-25 less than the Eldar codex and $30-35 cheaper than the Space Marine codex. The quality of what was put into the book (the lore and art namely) is on par with other codexes, and despite it's short size it's not exactly a small pamphlet either.

See, what happens when you find something GW sells as being too expensive is you're hitting what economics calls your "choke price".

n. The minimum price of a good or service that would result in zero quantity being demanded

To put it simply, you've hit the point where you don't perceive the value of a good or service being worth the price being asked and you don't buy it. This is a very subjective thing from person to person as one could deem no price for the Tau codex worth purchasing it due to a lack of interest while another sees it as being worth well more than the asking price because of how highly they value it.

Basically, just because you don't think something GW is selling is worth what they ask doesn't mean it's an intentional attempt to essentially steal your money. Basically, it's all perception based, not objectively based.

So where does this leave us exactly?

Well, honestly with the same overview I had at the end of my review of the codex: if you're a fan of the Inquisition and like the sound of what's in it, you may want this book. If you want to play the Inquisition without Coteaz, or Grey Knights, this book is for you. If you play Sisters and want more Battle Brother options this book is for you. If you collect codexes this might be for you, just so you have a handy reference.

If you're on the fence about this book definitely go for the cheaper ePub from the Black Library unless you feel you need the iPad version.

Otherwise, unless you really want this book for some reason you can skip it. It's definitely not for everyone and if or when it gets an update I'll do another review of the changes and if that interests you then I'd suggest picking it up, otherwise skip this one.