EDITORIAL 40k: It's Bigger Than a Breadbox 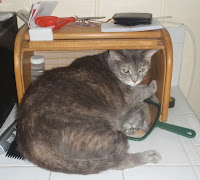 And I’m not talking about physically…...

No, I mean the nebulous concept of what 40k “is” as a whole is a lot bigger than the breadbox that I see people trying to cram it into. So what “is” it? Before we get too far, let me preface this with a disclaimer as people will make up some pretty wild claims if I don't:

Nothing I say in this article applies to "tournament" play and what TO's "should" be doing. Tournaments are already well off into being their own game and are already work under a fairly sizable list of house-rules as is (that is unless you can find the rules in the rulebook for brackets, rounds, time limits, and prize support because I haven't yet). Instead this article applies to the game as a whole and what it "is" and the boxes people keep trying to shove into.

Well before I talk about what it actually “is”, let me first talk about some of the boxes I’ve seen people try to put 40k into:

40k is whatever you and your opponent agree too, no more, no less. There are no real restrictions on it in the rules, especially not the kinds I’ve been seeing argued and that’s a good thing. It means it’s a narrative game, a casual game, a competitive game, a campaign game, an all out war game, it’s patrol missions and conflicts that span whole systems, it’s whatever we want it to be, whenever we want it. It’s not strictly meant to any one thing all the time for every player no matter what and the sooner we move past that the better the game can be.

Forge World is not “X”

I’ve talked about this before actually, but it keeps coming up so let’s dispel some things about FW really quick.

First off, FW is a part of GW. It’s made of largely of people who were chosen from the studio (and some later outside hires) to be this department, it was created to make cool models and provide rules for them, and this was printed in IA1v1 and IA2v1: 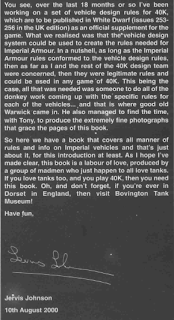 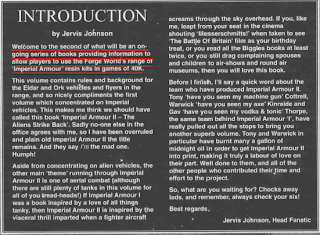 As we can see there is a stipulation mentioned in IA1, but it’s gone in IA2: that is VDR. Now VDR for those who don’t know was a set of rules to let you play just about anything you wanted (at a premium as it was about 30 points more than anything the studio made if you put in the exact same stuff) officially and legally. Now GW dropped this a long time ago, but FW continued to design with VDR until about 2009, when the IG book came out meaning that after nearly 10 years they finally stopped doing it. At that point it’s honestly a too little late to mulligan and take the whole FW collection out of the game.

Even taking that into consideration, there is the fact that IA2 says the books are meant to be an ongoing source of rules for play in games of 40k. Not rules to play "non-standard" games in, but 40k. There are no lines being created here by the developers between Forge World's 40k products and the regular 40k products everyone knows. That means that when someone wants to play Forge World stuff that there are no lines to blur and that any claims about Forge World not being supported by the studio in the past are bull.

I'll be happy to change my stance on this idea if someone has something from the studio since 2000 that says that FW isn't official of course. Why the studio? Because that's the same department I keep seeing being appealed to for the "truth" behind the matter and claims are made about without any sort of evidence.

Moving on from 13+ years ago, we have more evidence of Forge World still being valid today in the main rulebook right now. That's right, I've talked about this specifically before and it's time to bring it up again. I am of course referring to page 108 in the rulebook and where it says legal army lists come from (I've emphasized a point here as well):

With the points limit agreed, players need to pic their forces. The best way to do this is to make use of the army list in the relevant codex, although, of course, players are free to either adapt the army lists, or use their own system as they wish...
~"Choosing Your Army", 6th Edition Rulebook pg. 108

What does that mean for Forge World exactly? Well two things: first that the rules they have that alter an army list (for example: Contemptors, Helblades, Dreadclaws, Avenger Strikefighters, and more) are completely legal for play in a game. They adapt the army list and give it a new form and function. This is the same thing that allows codex supplements to work without a change or errata to the rules and makes it possible for players to use those just as legally. So before anyone wants to claim that it doesn't mean anything, remember that any arguement you say regarding that rule and Forge World can be applied equally to any of the codex supplements because they use the same permissions.

What about the Forge World army lists? Well beyond the intent Jervis gave us in IA2v1 that the Imperial Armour books were to give us rules for play in 40k, there is that second highlighted section I have there under "The Army List": "use their own system as they wish". Now obviously this can apply to homebrew, something I've mentioned in the past and something I support, but it can be applied to those Imperial Armour lists. They're a system that exists outside of a codex and doesn't adapt one of those codex lists and thus can be argued to be to be a different system the player can adopt.

No, no they don't. This is one of those things I see a lot of in list building threads, especially in threads where players are looking to build a certain theme or have a budget, or don't like something and don't want to use it and people show up and start cramming that one thing down their throats.

Be it Heldrakes, Grav Centurions, Inquisitors with Divination, Coteaz, Riptides, Wraithseers, or Celestine every army has something that people seem to swear needs to be in every single list no matter what and refuse to let other people have differing opinions about. So let me being clear about that and (hopefully) dispell some misconception I'm seeing:

It's not your list, army, or collection of models and the person you're trying to force to play things isn't you so back the hell off already!

Not every army needs to be fine-tuned to whatever your idea of "competitive" is and sometimes players are more than willing to lose a little of it for the sake of an interesting army that has a lot of theme to it and is more interesting and outside what people expect.

Seriously, no. This is 40k where it's so open ended that anything is possible. Want to play Dorian Heresy style Marines? Chaos Sisters? Hello Kitty Dreadnoughts? Bright Pink Eldar? My Little Pony Guard? If you can think of it then go for it.

There are no wrong answers in 40k.

And this brings me to my actual final point today: what 40k actually "is":

40k is anything you want it to be and more.

It's not something that can be strictly defined as "X" or "Y". It's not made to just be some kind of system for tournament play, or casual play or narratives, or campaigns or Apocalypse, or patrol games, or Kill Teams or anything else you think of. It's all of that and everything you're not even considering. It's a framework to support an enjoyable experience between 2 or more people and the only way to do it wrong is to fail to uphold the Spirit of the Game (please take note of my highlights):

Warhammer 40,000 may be somewhat different from any other game you have played. Above all, it's important to remember that the rules are just a framework to support an enjoyable game. Whether the battle ends in victory or defeat, your goal should always to be to enjoy the journey. What's more, Warhammer 40,000 calls on a lot from you, the player. Your job isn't just to follow the rules, it's also to add your own ideas, drama and creativity to the game. Much of the appeal of this game lies in the freedom and open-endedness that this allows; it is in this spirit that the rules have been written.~pg.8, 6th Edition Core Rulebook, "Spirit of the Game"

So what does all this stuff mean? Well if you're not having fun, you're doing it wrong. No I mean this seriously, you're doing something wrong. Be it not communicating with your opponent the kind of game you want, to playing something you don't really want to play, to agreeing to play someone you don't enjoy playing, if you're not having fun you've done something wrong and need to stop doing that. To quote an old joke:

Secondly, your job as a player isn't to just blindly follow the rules. It's to create your own rules, scenarios, stories, and even armies if you really want. You aren't being fettered to a strict rule set but being given a toolkit for anything you want to make. Just make sure you communicate these desires to your opponent so you can work something out ahead of time and not put yourself in a position where what you want to do doesn't fit what your opponent wants to do and you both end up unhappy.

Basically what I'm trying to say is 40k is far bigger than the boxes I've seen it put into and we've been losing a lot as a community by helping people try and force it into those little boxes. The game has so much more freedom, depth and things to explore than we're letting it right now and I honestly feel this game will get so much better if we stop trying to shove it into one small category and just let it live up to it's full potential of being anything we can dream up.