DISCUSSION: Do We Need a New System for Tournaments? 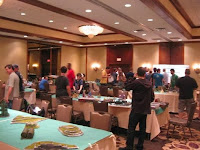 So 40k 6th Edition was made strictly for narrative play. Does this mean we need a new system...?

I've been following a lot of topics lately about 40k and things related to it and tournaments (such as digital codexes, FW being allowed, and so on) as well as a lot of rule debates and it's gotten me thinking: do we need to make our own system for tournament play?

Now I'm not really a tournament player anymore (I used to play in small, local tournaments, but I avoid big events like NOVA and Adepticon), but the question still strikes me as one that is worth addressing.

Already tournaments use a wide range of unofficial rules like preset terrain, time limits, rounds, brackets, limiting or eliminating allies, restricting or banning Forgeworld and so on, so taking it further and making a full ruleset doesn't seem unreasonable. After all, who wouldn't want a tighter, more streamlined ruleset for their games that makes competitive play more fun?

Of course then the problem of what to change comes up, and who should be the governing body of these adjusted rules and so on. There is a lot of possible back and forth here and not many easy answers.

So instead of me pushing my ideas onto people, I want to hear from you. Do you think we need a fan-made set of adjusted rules for tournament play to improve the competitive scene, or should we continue with things as is? There are no wrong answers, so fire away!