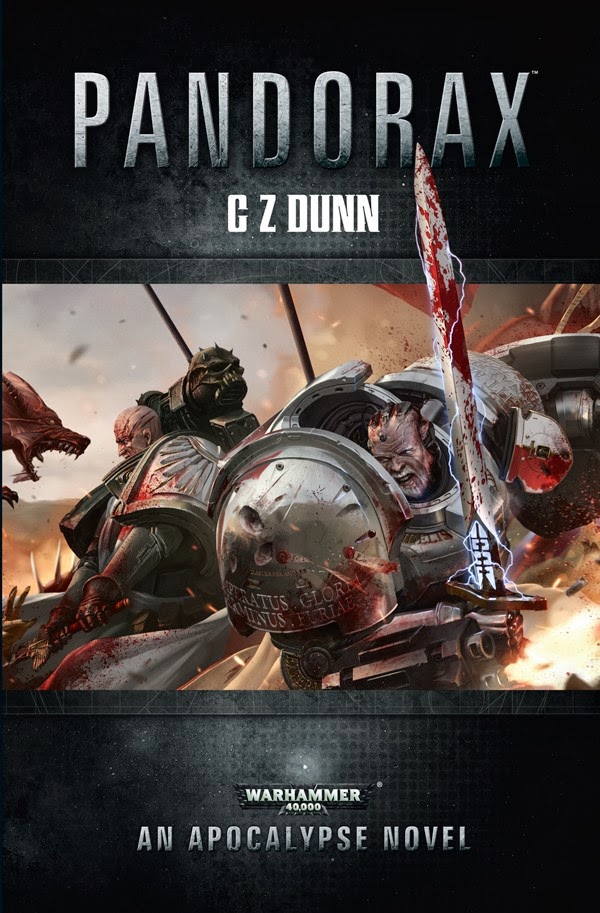 Lord of the Night reviews the first novel in the new Apocalypse series, Apocalypse: Pandorax by CZ Dunn.

"A novel that is as epic in scale and action as it is in story. Not to be missed by anyone who loves large armies clashing, heroes battling nightmares, and a plot that grabs you and doesn't let go until the very end, and even then it still has it's hooks in you." - Lord of the Night @ Talk Wargaming


Pandorax was a surprise release to all, the first of the new Apocalypse series, and of course judging by the namesake and by the contents of the book I think that this is a brand new series devoted to telling stories about the massive battles of 40k, the campaigns and full on wars rather than the one-off battles that the Space Marines Battles series focuses on. And what better way to start it off than a book featuring the entire Dark Angels Chapter, yes that's right all 1000 of them, and the Grey Knights going to war against both Abaddon the Despoiler and Huron Blackheart. If that prospect isn't epic enough for you, read the book and find the just as epic stuff in the plot waiting within the pages for you.

On the planet Pandorax, a sprawling jungle death world within the Pythos system, an ancient secret buried for ten thousand years has been rediscovered, and now that the Damnation Cache has opened once more, the servants of darkness have come to claim it. The dreaded Abaddon the Despoiler leads his Black Legion alongside the disease-wracked servants of Nurgle and the piratical raiders of the Red Corsairs and their master Huron Blackheart to take what is rightfully his. Responding to the distress calls of the outnumbered and outgunned Catachans guarding the planet, the Dark Angels Chapter marches to war alongside the legendary Grey Knights Daemonhunters. But each side has it's own secrets and agendas on Pandorax, and the secrets the cache holds may not all be heretical, but they all have the power to shake the Imperium to it's very core.

The story in Pandorax is as epic as the battles. It starts off fast by drawing you in with the mystery of Pandorax's past, and with a very nicely placed reference to Mr Dunn's previous work, and wastes no time in getting the action started, but at no point does the book sacrifice story for bolter porn. Instead it gives a story based around the war, the clashing of characters both physically and ideologically, and with some very very very surprising revelations and twists regarding certain characters and information that I really did not expect from this book. The story is primarily about the Pandorax Campaign, the events that occur in the battle and how the characters react to it militarily and how both sides fight the campaign, it isn't a personal story or an arching one, but it doesn't lose points for that as different stories are appealing for different reasons. I must admit that Dunn has been very ambitious with this novel's story, specifically the things he hints at and reveals in the book, and I'm sure that those who read the book will find it worth it just for those hints alone. There are character stories in the book, but no single character is the focus of the novel, rather the stories become a part of the Pandorax campaign as much as the actual military part.

The character roster for the book is filled with larger than life names. Grand Master Azrael, Supreme Grand Master Kaldor Draigo, Abaddon the Despoiler, Huron Blackheart, and one character that will unhinge your jaw when you realise who he is. Dunn's first novel has not started off small in any area and I find that he does each of this well-known characters justice, especially Abaddon and Draigo. The fandom's hatred for Draigo is very well-known but I think he comes across as a well-rounded and likable character in this book, and that's not just for what he does in his final few moments in it But most of all Abaddon who was so far from the Failbaddon idea that it made me very happy just to see him portrayed so well and competently, Dunn is clearly an author who recognizes Abaddon's power. Dunn's human characters were also nicely done, particularly the human pilot Shira Hagen who made me laugh quite a bit and I loved her conversations with the character Epimetheus, and Dunn's Catachans were grizzled and everything I expected from this famously belligerent group of Guardsmen. I also liked Dunn's Dark Angels, he finally brings the Fallen into the narrative of his portrayal of this secretive Chapter and the characters come across as mysterious and interesting, and at the same time flawed for all their secrets; on the DA note I chuckled when I saw all the names of the Dark Angels involved, all of them from Dunn's previous DA work including the novella Dark Vengeance and the audios Ascension of Balthasar and Malediction.

The action is some of the best in any Black Library book, just because it's so awesomely epic and filled with everything that makes 40k battles better than 95% of other sci-fis. Space Marines killing each other with bolters, super-heavy tanks tearing apart entire formations, Greater Daemons fighting champions of the Imperium, armies of warp-born monsters tearing at anything that moves, the Imperial Guard in all it's might and numbers, and fleets from both sides hammering at each other and dog-fights in both space and the air. One thing that Dunn did a few times in the book that I quite enjoyed was have mortals bring down Space Marines in a variety of ways, and each one felt like a plausible way for a normal man or woman or group of them to bring down a genetically enhanced killing machine. But what sets this novel apart from others in Black Library is the sheer scale of it all, thousands of Space Marines clashing in this book, millions of Guardsmen fighting entire armies of Daemons, and entire fleets fighting it out in space; I can't recall ever seeing such immensely large scale action happening in any other BL novel. Dunn shows the strengths of both sides equally, and if you don't already know who wins then it does feel like the battle could go either way and there's no telling who'll win until the end, and even at the end you may not be sure who actually won.

The pacing of the book is done well enough. The changes in area and POV are marked by a title showing the current date and the area the current POV narrative is taking place in. The novel shows the lead-up to the battle, the early stages of it and then goes into the full scale campaign and ends along with the campaign as the forces involve either leave or are defeated. On another note I must give my compliments to the very very talented Karen Miksza whose exterior artwork is very striking and her internal artwork is both beautiful and disgusting, in context that is a compliment, and I hope we'll be seeing more of her work in the future; the only thing that I wished she had done is put a full-cover spread of the cover-art in the interior artwork, and given Azrael hair. One other little thing is the nice cross-over hints in the narrative that Dunn makes to connect Pandorax to the audio-drama Trials of Azrael which occurs concurrently in Chapter 9 of the book, rather than outright say what has been happening and ruin the audio for those who haven't heard it yet, Dunn simply adds in little clues in the narrative, things that you could blink and miss, that those who are aware of the audio or who have already heard it will recognize.

Now for my favourite quote, it has to be this one for the sheer awesomeness of the threat and because it was powerful, over the top in a good way and because I never for a second doubted that the one who makes the quote would be able to carry it out,

"If you've only contacted me to gloat about the failure of the ambush at the mine, I shall wipe you and your renegades from the face of the galaxy with such totality that even the footnotes of history books will neglect to remember you, usurper."

The ending is a very good one, the battle for Pandorax has ended but many things remain to be done. Some good, some bad, and while we do get to see what happens to certain characters, some fates can only be guessed at and enter the category of, what I call "things that are going to happen but we'll never see." Dunn wraps up the story nicely, despite all the references and hints towards larger things in the 40k universe, this is a stand-alone story and  Dunn closes off the Pandorax Campaign with this book, though there is the potential for some short stories. On the whole I very much enjoyed the ending to most of the characters stories, and the one or two that I did not like was simply because I wished things had turned out better for that character, but they were still as well written as the rest of the book.

For a great story that enthralled me from start to finish, a memorable cast of characters filled with names that many will recognize, and action scenes that are cinematic in quality and some of the biggest and most badass battles in a Black Library book, I give Apocalypse: Pandorax by CZ Dunn a score of 9.0/10. This is a book that any fan of 40k should give a try, especially if you like huge battles and plenty of Space Marines and Chaos Marines clashing, and it's a stand-alone book so you aren't committing to a series or multiple books, if you want to read just a single book then Pandorax is a good choice.

By Lord of the Night