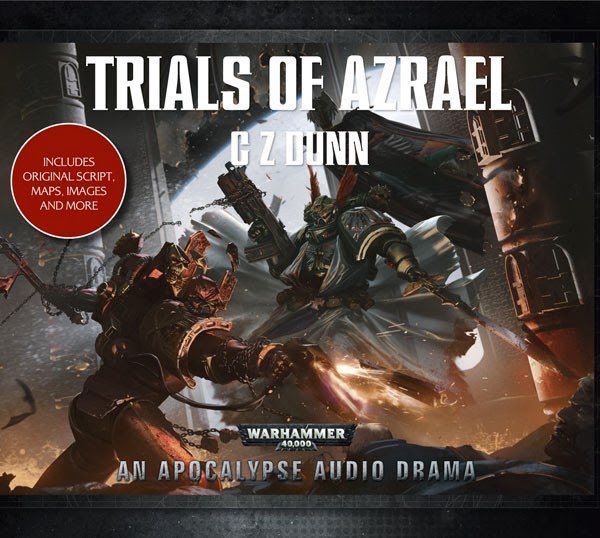 Lord of the Night reviews the companion audio-drama Apocalypse: Trials of Azrael by CZ Dunn.

"An action-packed and tense audio adventure that may be a companion to the novel Pandorax, but though smaller in scale is every bit as enjoyable as the novel it is set in CZ Dunn's audios have always been enjoyable and Trials of Azrael is his best one yet." - Lord of the Night @ Talk Wargaming

After finishing Pandorax my next read/listen was obviously going to be Trials of Azrael, I was tempted to listen to the audio first but I decided to read the book that covers the entirety of the Pandorax Campaign before delving into an audio that covers only one small part of it. The very premise of this audio attracted me to it, the story was a secondary concern after seeing that it was about Azrael and Khârn the Betrayer fighting each other. Simply the confrontation would have been enough, but the audio proved to be much more than just that and has been one of the most enjoyable audio-dramas I have ever listened to.

The war for Pandorax rages on, but now the first glimmer of hope has come. The might of the Dark Angels, first among the old Space Marine Legions, in full Chapter force has descended upon the Pandorax system with the intent to destroy the Forces of Chaos that assail it. Taking to the stricken battleship Revenge, Supreme Grand Master Azrael finds himself drawn into a deadly game of cat and mouse alongside one of the galaxy's deadliest killers who hunts both him and the one responsible for this twisted game. Cut off from his brothers and with only a junior Tech-Priest aiding him, Azrael must survive the corrupted lower decks of the Revenge and find a way to end the game, before it ends in his life being the latest to be cut short by the Khârn the Betrayer.

The story in Trials of Azrael is more than it appears at first glance, reading the blurb and looking at the cover you'd think that this is a simple confrontation, admittedly an awesome one, between two of the greatest warriors in 40k. But it's also a hunt in a corrupted warship, a game of cat and mouse with a cackling puppeteer pulling the strings, and a mystery as to who can be trusted in this hellscape of bone and blood. Dunn weaves a good narrative switching between Khârn and Azrael and the other key character, Enclemita Cheyna; each of the three POVs covered different events in the ship and were just as engaging as the others. Dunn also creates a good mystery in the event that has drawn Azrael and Khârn together, and who exactly is responsible for it, which keeps the reader guessing through the story. This story is a full audio but when compared to the main narrative of Pandorax, is actually very small and short in comparison to the wider events taking place, and for reference the start of Trials of Azrael is chapter 9 of the book and about halfway through the same chapter the audio has ended, so this story is just one small personal one in the wider background of Pandorax, though it doesn't lose any of its appeal or be any less enjoyable for that fact.

The character base, as with all audios, is small and only has three characters of note. Azrael, who made me laugh a few times and came across as a character who isn't defined by his Chapter's predilection for secrets;  Khârn whose excellent voice acting continues and who also made me laugh as well as smile grimly as he hacked his way through the Revenge and got to fight quite a few battles; and Cheyna who was an important presence in the audio despite being on her own for most of it. Dunn makes each of these characters personalities clear in the narration and their actions, and he makes sure that each of them plays an important role. But the best thing he did was showing the depths in both Azrael and Khârn, each one of them has hidden depths but what is hidden in those depths is wildly different for both individuals. One aspect to Khârn that I really liked in this story was that he rarely needed to speak, his actions and the tone of the narration spoke volumes about what he was doing or going to do, much more than his actual words would have done; but when he does speak it's cool and often grimly amusing.

The action is very well done and the audio does contain more fights than just Khârn and Azrael, while that is an important part to the story, the hunt that follows is just as important and both Azrael and Khârn get to fight other opponents as well, though Khârn of course gets to fight more and listening to him carve his way through the Revenge was very enjoyable. Now of course when two characters like this come together it's all too tempting for whichever character the author likes more to be just generally better than his opponent, but this drama shows the strengths of both characters equally while acknowledging that one of the two is a better fighter than the other, but that wouldn't necessarily guarantee his victory all it takes is one mistake in a fight to cost you victory. We also get to see Khârn's particular talent, which I don't think we've seen before, in quite a cool scene that is a good reminder why fighting Khârn is just a bad idea. The highlight of the audio, action wise though, was the duel between Khârn and Azrael and not only was it exciting just for the sheer pleasure of these two characters fighting, but it was well choreographed, narrated in both voice and sound effects, and written.

The pacing of the audio is done nicely. Told across ten sections the story flows nicely through the narration and the fitting voice acting, Dunn really builds the self-contained world within the Revenge through the narration of dark corridors corrupted by Chaos, bloody battles being fought in its halls and the journey Azrael faces trying to get back to his brothers. One great aspect of the audio was the voice acting, Khârn of course was the standout with his rough yet clearly enunciated and almost musical voice, it puts me in mind of a Spanish accent the way certain letters come from him. Azrael sounded gruff and with an almost noble tone to his words, but importantly he was clear and I was never confused about what he was saying which has been an issue with some Space Marine characters in past audios. And Cheyna was one of the best voiced characters because her actress conveyed the tech-priest's youth and inexperience, and terror, in her voice which was soft and normal, no machine overtones or monotone vox-speakers, which added to the personality of her character.

Now for my favourite quote, it is definitely this one because while everything this character said was cool, this is the best line he gives,

"We are pawns in somebody else’s game here, Dark Angel, and I do not like being played as a pawn. I almost don’t want to give them the satisfaction of killing you. Almost."

The ending to the audio was very amusing, and actually very heart-warming and all the more so considering who was responsible for that moment, I really didn't think he had it in him. Dunn closes off the audio nearly completely, wrapping up the story and sending the characters off to whatever comes next for them, though he does leave one thing unaddressed that he did not acknowledge in Pandorax, or if he did I missed it. But the ending also reminds the listener that the audio is only a small part of the larger Pandorax Campaign and now that this brief adventure is over, it's time to get back to the main theatre of war. Despite Trials of Azrael's short length in comparison to the novel Pandorax, I would recommend reading Pandorax first as the audio will spoil several things in the novel for you if you listen to it first, whereas the novel does not  reveal anything about the audio directly but instead features little hints in the narrative that something has happened off-screen, and those who know what the audio is about will recognize them.

For an enjoyable and well-read and written story, very good action scenes that had me on the edge of my seat and more of the great voice acting that the recent Black Library audios have displayed, I give Apocalypse: Trials of Azrael a score of 8.7/10. Anyone whose read Pandorax should give Trials of Azrael a listen, as it adds to the main book with an interesting side adventure that is entertaining enough in its own right that anyone can listen to this audio, and I would recommend it even to those who haven't read Pandorax as it's just genuinely a very good audio that will appeal to any fan of 40k really, especially if you like the idea of two of 40k's most recognizable names fighting each other, which does not happen in the books that often.