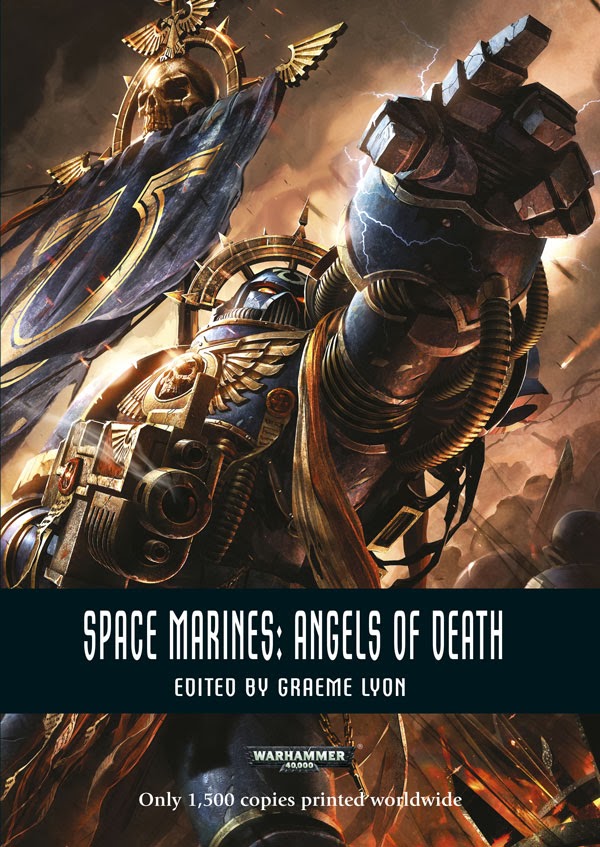 "A panoply of short stories featuring the Angels of Death that is not only a great introduction to the 41st Millennium but also a set of brand new stories that will appeal to all fans of the indomitable Space Marines." - Lord of the Night @ Talk Wargaming
Rite of Pain by Nick Kyme

Nick Kyme's Salamanders are a group that I have very much enjoyed reading in the past, however this particular story did not meet my expectations. Mainly it is the premies of the story that I find confusing, and rather strange as well. The Salamanders are going through so much effort to convert a certain character, and expecting him to forget his real chapter. Why don't they just send him home? Or let him wear his old armour and just fight alongside them until he can get home?

Chaplain Elysius was nice to see again, being my favourite character of Kyme's, but even his appearance didn't make this story any better. Really it felt like Kyme trying to justify keeping this character around, but it could easily be achieved in the examples I gave above rather than the Salamanders forcing this character to be a part of their chapter and abandon his old one. I give Rite of Pain a score of 2/5.
By Artifice, Alone by George Mann

I am a big fan of George Mann's Raven Guard, no other author has captured the Raven Guard as well as he has in my opinion and the adventures of Captain Koryn in the Sargassion Reach make for a very good set of short stories. Which is why it was such a disappointment that this story was completely and utterly pointless. There was no story, just two Raven Guard having a conversation that didn't really matter.

Truthfully this story felt more like an extract from a full novel that I only got to read part of. The worst part was that apparantely this story is set right before Koryn and Cordae are going after Gideous Krall, the architect of the entire Sargassion Reach invasion, and the plan they have to get him sounds like it will make for an epic battle. I really hope Mann will write a book about his Raven Guard, because otherwise he's just teasing us. I give By Artifice, Alone a score of 1/5.

Cavan Scott is an author I have not read before, so his Death Spectres story held some interest for me. It had some good moments but ultimately I think the idea of a Space Marine hunting a xenos animal sounds like a cool idea but in execution, not so much. Especially as the fight scene was choreographed badly and I find it hard to believe that a tree branch could impale a Space Marine, and that even a Space Marine could fight while impaled on a tree like a shrike victim.

The ending to the story was a double ironic twist and actually rather grimdark in a cruel way, the Space Marine tried so hard to make a species extinct and he failed. The reference to the Death Spectres faulty gene-seed was a nice touch as well, and I thought it was amusing how Matana interacted with Grissan even if it didn't end well. I give Trophies a score of 2.5/5.

The Ghost Halls by Laurie Goulding

Finally we come to the legendary Grey Knights, and Laurie Goulding's second story in the anthology. And his second success as this story was enjoyable the whole way through, first off for the frankling jaw-dropping way the Grey Knights interacted with the Eldar. Any regular Space Marine present would have been horrified, but it was rather amusing to see Space Marines treat Eldar with courtesy and respect, though amusing in an absurd way. But I really enjoyed this side of the Grey Knights, the side that cares only about Chaos and is prepared to treat anyone who fights it with respect.

The Eldar were also nicely portrayed, their intial disgust giving way to startled thanks and gratitude, and the final twist of the story that explains a particular piece of Grey Knights lore is very very surprising to Horus Heresy fans, an interesting choice by Goulding to have such a connected and it implies that the Eldar know more about humanity than they let on. I give The Ghost Halls a score of 3.5/5.

Back to Nick Kyme and this time it's with the Marines Malevolent, the guys who were dicks in every single appearance they've made in his stories bar one guy in the short story Emperor's Deliverance. This time though they meet with the Black Templars and the resulting confrontation is a dark one, and one that really sells the moral of the story. Don't mess with the Marines Malevolent. For once, they get to do something badass that isn't completely morally repugnant, though that depends on how you view it, and we get a glimpse of deeper emotions from the protagonist.

I quite liked how the Templars viewed the Malevolents, even giving them a chance at their meeting to prove all the stories wrong, eventually leading to the Templars and Malevolents confronting each other and exactly what the Malevolents are planning becomes apparant to the reader, I found it to be a very smart scheme though devious and underhanded. But the Malevolent characters were interesting and while they may not be likeable, I would like to see more of Kyme's Marines Malevolent. I give Bitter Salvage a score of 3.5/5.

That's it for this part of the review. Thanks for reading. Until next time,