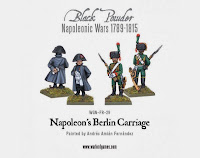 I'd like to apologize for being later than usual today. I've been traveling the length of the UK in horrendous weather. 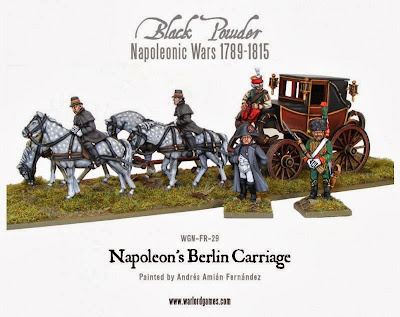 Named 'Berlin' after the then capital of Brandenburg, the kit includes Old Boney himself, his bodyguard as well as the four-horse coach. The carriage was built for Napoleon's Russian campaign but was captured by the Prussians at the Battle of Waterloo while the Emperor departed on horseback.
Use the model as a command piece, a battlefield objective or simply a cool terrain piece - its inspiring presence is bound it improve your dice rolls! And of course Napoleon makes the ultimate general for a French army.
Pack contains a 4 horse coach, Napoleon and 4 attendants.


Warlord Games have released this fantastic carriage carrying none other than Napoleon himself.

Murdo and Galaine by Ion Age 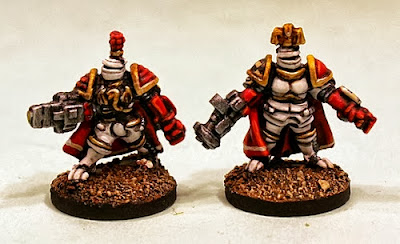 Baron Aldo Murdo raised his Sequence Particle Beamer in the instant that the tight knot of Nox troopers saw him standing alone in the clouds of poison gas bled out by the Khanate Venefirous Venters all over the zone. He had hoped not to use the weapon, knowing that it was in dire need of servicing and that its lethal energy could just as easily annihilate him as well as any foe. He had to choose. He would not stand and die and he could not close with the Nox before their Janus Blastguns picked him apart even in his super heavy Noblesse powered armour. Aldo brought his finger to the firing stud within the beamer and took a firing stance legs wide and set. His helm readings told him that one shot would carry away almost if not all the Nox. He pressed the stud. Click for more... 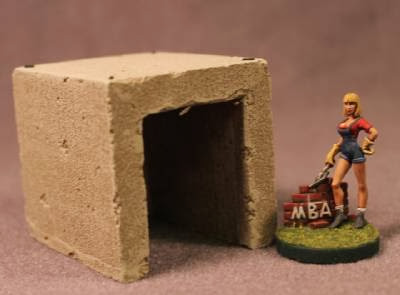 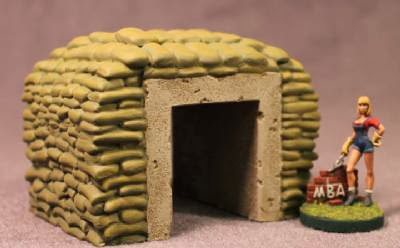 As we continue to expand our modern 28mm range we are now offering Iraqi style rocket bunkers. We have two styles. One is the bare concrete and the second one is fortified with sandbags. Many of the vets who served overseas will recognize these as they were on every base in theater. They come unpainted and figures are not included.
DIR-061 Iraqi Bunker $6.95
DIR-062 Iraqi Fortified Bunker $12.95
These will go great with our Light Generator Sets, range of barriers, Iraqi Check Points, Entry Barrier Gates and new Concrete Towers. Check out all of our Direct line which is only available directly to you at either our website or when you see us at conventions.