Saw this over on Reddit and squealed a little.

Apparently he made it with Magic Sculp, a Spider Man figure and bags of talent.

We need a full range!! Marines, Nids, Sisters, Daemons. I'd get the whole set.


Go take a look on their site. 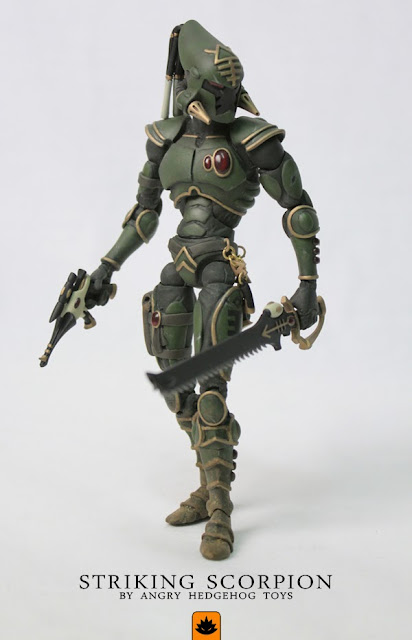 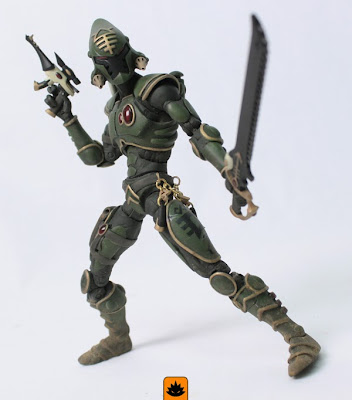 This post brings the blog up to date! This is my most recently completed project, a 1/12 scale figure of an Eldar Striking Scorpion from Warhammer 40,000. Warhammer was definitely an important step on my road to where I am today, and although I don't play or collect the figures I'll always have a soft spot for the universe. The Eldar were my favourite race, and the Striking Scorpions my favourite Aspect Warriors. I nearly made a full-size Scorpion helmet whilst at uni, but decided on the Bubble Bomber instead.

I actually started this way back in 2009 at the same time as the Wesley figure - he was a great way to use up leftover magic sculpt. Once I got my job though, my time spent commuting stopped my working on it and he was stuck in the WIP box for years before I dug him out in 2012 and decided to finish him.

I went all out, took him way more than any other figure I've done. The base figure is a Spider-Man, chosen for his lithe frame and great poseability. The armour is sculpted, as always, with magic sculpt. Where he deviates is on some of the details - the mandiblasters, weapons, runes, wargear and dreadlocks were all drawn in Rhino and 3D printed by Shapeways. This allowed me to get a crispness of detail I wouldn't be able to achieve with sculpting by hand. My hat goes off to those who sculpt at 28mm, I don't know how you do it! The dreadlocks were paired up, moulded in silicone and cast in rubber, so they flex around very nicely. I bought gold links to connect the runes and wargear to his belt, and printed custom waterslide decals for his thigh armour and kneepad.

He isn't entirely accurate to the mini. I'm never usually very fussed by complete accuracy, I believe entirely in artistic licence. I'm also a fan of practicality, which became tricky when I was considering his pistol, the pouch/holster, and the cable connecting the pistol to his arm. None of that seemed to work together, so I compromised and went for aesthetic appeal.

First time I've used pigments to simulate mud, I'm definitely doing that again! Once the weather warms up a bit, I'll take him into a forest and get some shots there. I'm chuffed to bits with him, and the best bit? I get to keep him!