EDITORIAL: Why I still have faith in the Sisters 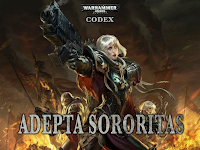 Or should I be saying I have faith in the Adepta Sororitas?

The codex's name change (and my reuse of the newest Sisters artwork since 3rd Edition) aside, I'm sure a few people are already rolling their eyes and sighing at the screen at the sight of this topic. I can already hear the common complaint being furiously typed out into the comments:

"Sisters are never going to get a real codex again, why don't you just give up man?"

Or maybe it's: "I don't know what this idiot is talking about, Sisters are totally going to just end up in someone else's book like the Templars did."

I was never very good at paying attention to the naysayers beyond telling them that I thought they were wrong so maybe I'm forgetting some of the claims I've read over the last couple years.

To quote someone I read over on /tg/ that sums up my feelings on the matter very nicely:

Regardless of why I'm inciting rage over this stance though, it's one that I'm not likely to drop until Games Workshop actually proves me wrong. So that out of the way (and before the angry people of the internet show up to lynch me) here's why I still think Sisters are going to get a real codex:

No, that's not somehow a typo I made while having a full body seizure on the keyboard, it's a real thing, and that really exists. Unlike the Loch Ness Monster. Or a successful sci-fi series on Fox.

So what do we know?
So what does it mean? Well here's my perspective:
So those are four solid points in favor of the studio actually being in favor of going forward with the Sisters.

But what about those models? You know, the plastic ones we don't have yet?

Plastic models have long since been holding Sisters back, literally it seem,s as at Enter the Citadel Phil Kelly coughed up the cold truth:

Sisters of Battle haven't been updated to date because they didn't have the technology to do possible multi-part plastic kits properly.

This means the real reason for Sisters to fail to get an update so far was not because no one wanted too, but because they failed to produce models that met the actual standards they wanted (possible sleeves, detail on the robes, and the like).

This is now "fixed" (again, from Phil Kelly at Enter the Citadel) though, which means that they not only have sorted out the problems, but know that the solution works. That or they've spent the money on the things they need and know it works. Either way we have word from the studio that plastics are now possible and that alone gives me cause to believe in their eventual release.

So it all looks pretty solid and points towards Sisters getting a real book, right? Well wait just a moment! There is still the reason of why exactly I don't believe the Sisters/Adepta Sororitas are just going to end up in another army's codex when they do get a full release.

There has been a murmur ever since the (now debunked) leaked "future release" list in 2012 that Sisters were getting rolled into another army. It started there as "Forces of the Imperium", but in the wake of that being debunked a new rumor emerged: that the Sisters may in fact be rolled into the Inqusition instead.

It's hard to say where this came from exactly as I haven't seen an original source (feel free to tell me below if you know), but when I run across this the most it's posted not as fact, or even the notion of it being based on fact, but rather a fear of it happening, or an almost spiteful wish (I'm looking at you Black Templar players, some of you guys are far to bitter at Sisters and keep wishing ill on them. Not cool guys).

That said, there is something more to all of this that I pointed out before:

There are people in the studio who primarily play Sisters.

Think about that for a second, there are people who play Sisters who work in the design studio. This alone gives weight to the idea that there are people who would protest (potentially loudly, and with fire) taking the army and taking away what makes it unique and special and muddling it with another faction.

That brings up another point: what army benefits from putting the Sisters into another book?

Not the Sisters, they go from being a flavorful and unique faction to being someone's tag-alongs. And as the 40k community saw with Codex: Witch Hunters this can lead to a loss of a lot of background lore which has yet to make its way back into the codex in whole. Not really a good thing there.

Now if you just agreed to that last statement I recommend getting your brain checked, because it might be expired and have begun to spoil. Why? Because even if we assume there is some kind of restricted access to specific units, that's a lot to cram in there without counting what would be added on top of that in terms of new units and kits for both armies.

At least when you look at what was done to the Black Templars there were already a lot of shared units, or unit equivalents, Sisters share that with no one so it means each of those units has to have it's own entry. Furthermore, the two armies don't mesh thematically (outside of the rare occurrence where Sisters end up fighting Daemons, but then you get people bring up the Bloodtide for a reaction).

First we have the Sisters, who are the Militant arm of the Ecclesiarchy and help the Ordos Hereticus in their fight against Heresy. Then we have the Grey Knights. They fight Daemons, and the threat of Daemonic taint. They're super secret psykers whose existence is only known by the High Lords of Terra, the Inquisition and maybe the Exorcists chapter (who donates any recruits who fits the Grey Knights standards to the super secret Daemon hunters). These two things aren't really a good mesh in a single army because they have widely different focuses, even with the Inquisition bridging them . Plus it just crowds the book without giving either army much in the way of making them more interesting or better.

About the only thing that could work is putting Ordos Hereticus back in (a move I'm not fond of as I was no fan of them being in Codex: Witch Hunters), but that's not the Sisters being added into someone else's book, that's the Inquisition piggybacking on another existing book again.

Really we could go down a list here, but Sisters only fit into their own book with any level of "neatness" (not to mention not watering down another faction's book) and frankly if they don't stay that way (even with the new codex name) I'd be very surprised. I'll be less surprised if the Inquisition shows back up however. I just hope if they do they don't try and acquire the whole book again.

So there you go, that's why I still have faith that they'll getting a full codex in the future (my money is actually on late 2014, no later than mid 2015, pre-WFB dropping). And with the recent two-month release devoted to updating Dark Elves and taking that metal range and turning it into a plastic one I think we may have a sign of what the Sister's eventual full release might look like. Only with less exposed skin and boobs.