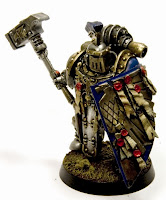 So let's talk about Forgeworld....

It's no surprise that FW is frankly one of the biggest hot buttons in the Warhammer 40,000 community. Brining it up is often a great way to insight debates, flame wars and some general Internet nastiness as battle lines are drawn and everyone on both sides mans the trenches and prepares for war.

Alright, perhaps it isn't quite the Western Front, but this is a Big Deal to a lot of people and I've pitched my hat into a few of these debates about it so let's address some of those claims and jump into one of the biggest online debates of the community!

Yes, nothing I said here dictates anything to do with tournaments once so ever. I'm not trying to change tournament play or rewrite the book on how we conduct those things, I'm laying a framework to explain my viewpoint.

And people who play tournaments know that they aren't exactly indicative of a normal game. Terrain placement isn't done via random generation, some use comp systems, there are all sorts of crazy restrictions (1999+1, no double FOC, no allies, no allies over X points, banned items, banned relics, ect). If you can think of it (within reason at least) chances are there is a tournament somewhere who has it as a rule. Because of this I'm not even going to pretend that it's even a real expression of a "normal" game and just move one.

Disclaimer 2. I am not saying anyone has to play anything they don't want too.

Wargames inherently require a social contract between players. The agreement to play a game isn't something that you can just force out of people (at least not legally, but we're talking in normal social settings before anyone decides to point out other, rather illegal, methods of forcing someone to agree to things). Because of this I'm not going to even claim that anyone has to play anyone. Just like you can turn down a game with the guy who likes spamming Baleflamer Heldrakes you can turn down a game against someone who plays Forgeworld, or anything else.

That point isn't really what is up for debate here, but instead the real point is a different arguement, a sort of red card that gets thrown down when the topic of Forgeworld comes up: that it's not "official" or "legal" or "GW". And honestly it's just a bad claim that doesn't hold up under scrutiny. Now you can argue if you want to play with or against Forgeworld all you want, but I don't believe that the argument should ever be "Forgeworld isn't a legitimate part of the game."

So you know my stance on this and what I'm actually arguing for, let's get into it before someone decides to burn me in effigy.

Now, to make this easy for everyone, I'm going to break this into sections, each section will have a header of the crux of one of the arguements I've seen. This way, if you just want to disagree with me on something specifically you can find your preferred arguement, see my response and then go from there. It just streamlines it for everyone. So let's dive into the fire shall we?


Forgeworld isn't even GW...is it? It's not even on the website!

Yes, this is an actual argument that has been made. For those who are unware, Forgeworld is a subsidiary of Games Workshop. It is, to put it simply, a brand that GW sells things under much like they sell the hobby materials (paints, models, terrain, basing kits) as Citadel products. This branding allows them to separate the nature of Forgeworld as a different kind of product, which has books that focus less on the Imperium as a whole and instead on individual events (the Siege of Vraks and the Badab War and now recently the Horus Heresy to name a few). It gives GW the ability to continue producing a main line that attracts a wide audience while also catering to the demand for "more".

And before we go any further, yes Forgeworld is linked on the Games Workshop website. First you can find it when you scroll down to the bottom of just about any page, right next to the Black Library link. And if you open the country select drop-box you'll also find it there. It also appears in the White Dwarf, in the blog on the main site, is sold at GW events, bears the Games Workshop logo on every book, is held under the same copyright as all other books Games Workshop produces and to top it all off, their email is even on the same server as the rest of the company (@gwplc.com).

Forgeworld's distinction from Games Workshop is solely so the company can have a sub-brand and isn't there to separate the models and rules and events from the main game itself, but to separate the focus of the different product lines.

To put it simply it's like Coca-Cola and Dasani, both are made by the same company, but the two products are targeted at different markets.

Ah yes, this old, old, old chestnut. I'm going to try and put this as gently: this arguement is pants. It's an argument so pants that its pants wear their own pants.

So what do I mean? Well in a game system where we have Riptides, Wraithknights, Baleflamer Heldrakes, and Screamerstars running amok can we really argue that anything that FW produces really is that out of sync with the game as a whole? The only times a real disconnect occurs is when we have Experimental Rules, which are free download-able rules from the Forgeworld site that allow them to test new units and options they haven't gotten ironed out completely. But the input that they get back one these results in an overall much more well balanced and sometimes even grossly overpriced version.

The only real unit that comes close to being "broken" are the Imperial Guard emplaced guns (like the Thudd Gun), the big issue actually stems more from the Artillery rules than anything else, and honestly if someone is spamming those they'd spam just about anything so complaining about that is blaming the symptom, not the problem which really is the players who choose to go full out with what is the most powerful options they can take, damn everyone else's fun.


Forgeworld doesn't offer the same number of options to every army!

I'm going to keep this one short: neither do codexes.

But something FW does do better is give almost every army access to flyers and/or more anti-flyer options (sorry Tyranids, yours is only an Apocalypse option. Maybe next time?), which is a fact that often gets overlooked, especially when we were looking at the era of the Necron Flying Circus.

And honestly, about a good third of these options people want to count really only work in specific mission types. Things like Load Lifter Sentinels aren't going to see the table very often, and some of the other options can't even be used outside of Apocalypse. And all that Horus Heresy 30k stuff? Not designed for normal games and basically is a subgame that exists for the die hard Heresy fans.


Forgeworld isn't in the rulebook!

Technically people who like to use this argument are right. But here's a fun fact for you, while Forgeworld isn't in the rulebook, neither are codex supplements, which are were a planned part of the game when 6th Edition was being written.  Here's where it falls apart as a legitimate argument though:

With the points limit agreed, players need to pic their forces. The best way to do this is to make use of the army list in the relavent codex, although, of course, players are free to either adapt the army lists, or use their own system as they wish...
~"Choosing Your Army" pg. 108

Now if you were paying attention you'll notice I underlined a key phrase here. "Players are free to ... adapt the army lists". Now what does that mean exactly? First let's look at a work I picked out there in bold as defined by Google:

So it means that the developers have given players explicit permission to modify the codex army list. And while I've related this to homebrew, it doesn't become less valid here. It's a very powerful rule in the book as it is also the only rule needed to allow Codex Supplements to be a valid part of the game. So in this permissive ruleset we have permission to change our army list, so how does that apply to FW?

FW's books mainly add new units, rules and sometimes even restrictions to an army. They explain quite clearly what FOC slot the new unit falls into, how much it costs and what any and all new rules do. They, to borrow the rulebook's phrasing, adapt the army list.

And the army lists, like the Tyrant Legion from the Badab War can either be classified as a different system (as permitted by the rules) or an adapted form of an existing one (like how Krieg adapts the baseline that is the Imperial Guard codex into a new form).

In the end that rule is all that matters when it comes to how valid/legal/official/what-have-you that FW can be considered in this game. The players have been given the permission to play anything they really like by the rules of the game, so can we move beyond these claims that FW is some how less than a full part of the game now? Can we move beyond what is basically hiding behind a false shield that claims something that just isn't true about the game and instead of trash talking other players choices in what they play, or even assuming (not to mention accusing) that every player just wants FW to somehow break the game, that it's a real choice that's no less valid than any other?

Again, I'm not saying anyone has to play with or against Forgeworld, I'm just saying that we should stop making up excuses for it when a simple "I don't like playing with Forgeworld" would do.At least then we'll be a lot more honest on why we don't want to play a game instead of trying to hide behind a sort of wall we've built to try and keep things out that doesn't actually have a foundation in the game we're playing.