GW have released this image of the upcoming Adepta Sororitas warlord traits table. 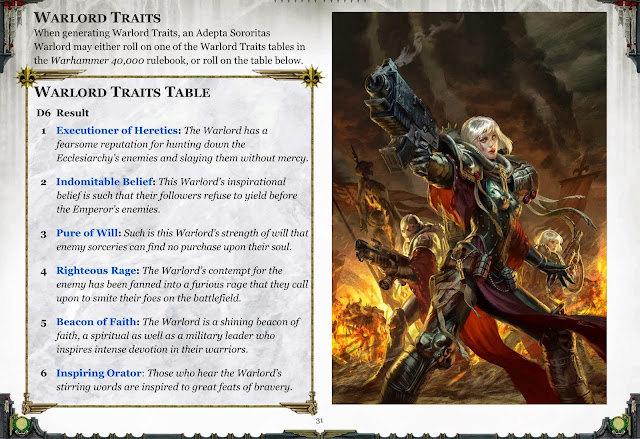 1: Executioner of Heretics: The Warlord has a fearsome reputation for hunting down the Ecclesiarchy's enemies and slaying them without mercy.

2: Indomitable Belief: This Warlord'ss inspirational belief is such that their followers refuse to yield before the Emperor's enemies.

3: Pure of Will: Such is this Warlord's strength of will that enemy sorceries can find no purchase upon their soul.

4: Righteous Rage: The Warlord's contempt for the enemy has been fanned into a furious rage that they call upon to smite foes on the battlefield.

5: Beacon of Faith: The Warlord is a shining beacon of faith, a spiritual as well as a military leader who inspires intense devotion in their warriors.

6: Inspiring Orator: Those who hear of the Warlord's stirring words are inspired to great feats of bravery.