Hello and welcome to Promising PLogs; a monthly feature where we bring you our choice of high quality Project Logs from around the Internet. Each month we will look at a new PLog and give a quick update on previously featured Project Logs.


To kickstart October and the start of Plog Focus we've got a 40k Project Log for you from Heresy Online contributor Xenobiotic, he was also kind enough to answer some questions for us, feast your eyes on some hardcore unadulterated 40k-porn! 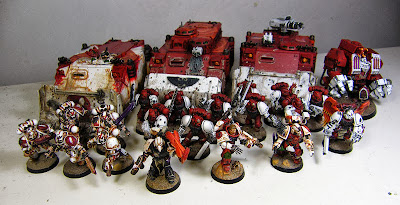 If you head over to Xenobiotic's Project Log you'll be treat to a nice mixture of his own Blood Angels successor Chapter the Brethren of the Phoenix (pictured above), some pre-Heresy Night Lords  and also his Void Sharks Chapter - you'll also find the odd random miniature in here from his sporadic inspirations! The first thing that stands out about his work is the crisp consistent paint job - as you can see above he combines red and white to excellent effect and his weathering and battle damage is just superb. 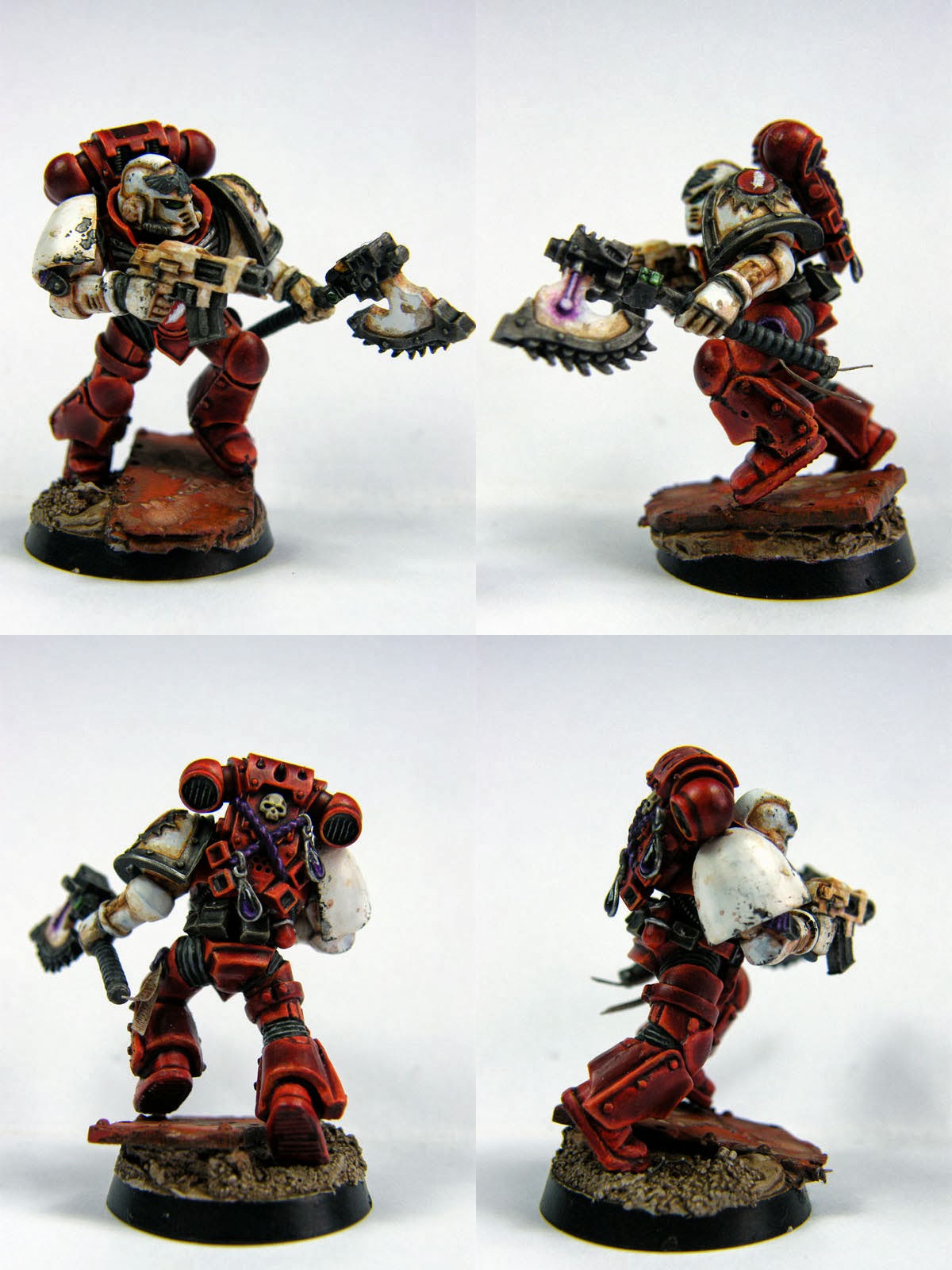 So about his Chapter the Brethren of the Phoenix
- I asked What Inspired him deviate from the tried and test Blood Angels scheme to the red and white one we see in your work?

"The short answer is variation. But I also think that most aspiring hobbyists like the idea to create something of there own within the pre-defined world of the hobby. I remember I was just getting back into the hobby after a few years of hiatus because some friends of mine wanted to pick it up again and get some playing done. I've always been drawn to the aesthetics of the Space Marines so I knew I wanted to play them but at that time I didn't liked the idea of playing within the constraint of the official fluff. So I sat down with the Blood Angels codex in order to create something believable, similar and still easy to paint. From there it evolved a lot and quickly. Being pushed on by the kind souls on the forum really helped push my efforts which in turn made me evolve even quicker." 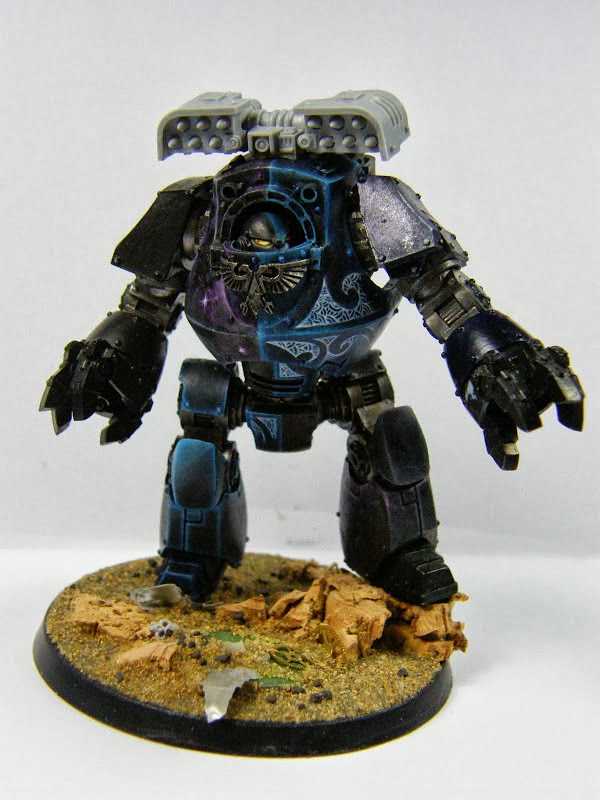 I had to ask how long it took on average to paint to this standard per model?

"I've changed my methods a lot the last few years, always experimenting with new ideas and approaches. Back when I started the project log I did everything by hand, which yields good results but takes a lot longer to finish - these days I have ridiculous demands on myself which makes me spend a long time on the finishing touches instead - I guess maybe it evens out in that aspect.

Part of learning and becoming more experienced I believe lies in knowing what route to take in order to achieve a pre-defined result with as few unnecessary steps as possible. My sense of quality has risen a lot and the demand on myself and from the forum users helps keep me focused but also reduced the amount of finished miniatures/time unit a lot.

A freehanded rhino chassis vehicle (like my baal predators) probably takes around 30-40 hours from start till finish (mostly dependent on the complexity of the freehand and if I make any mistakes or not).

A high quality character miniature full of details painted mostly by hand (like my librarians) I think takes around 10-20 hours.

A standard infantry marine would probably be between 3-6 hours depending on armour type and equipment.
Now that I've begun using airbrush I can cut down that time a lot when it comes to infantry miniatures (at least halve it compared to before), but I'm still a novice to the technique and have yet to use it efficiently on vehicles." 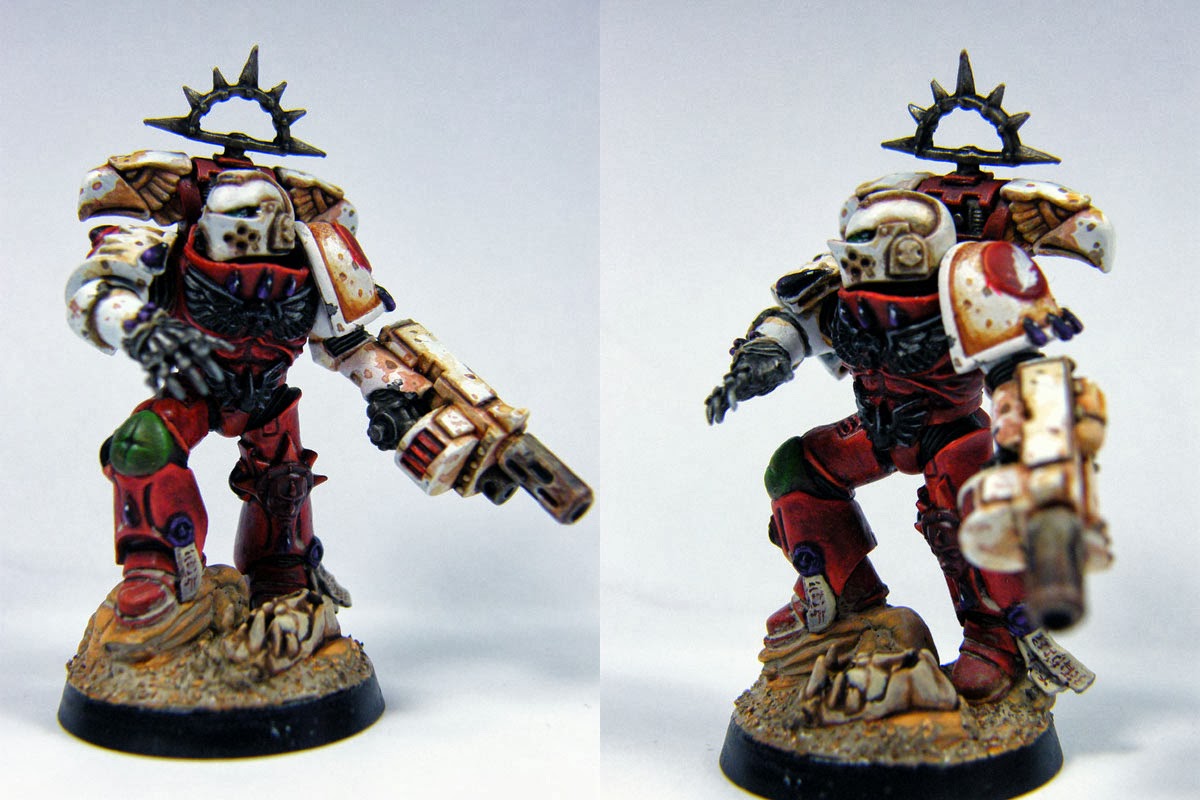 The burning question I had to ask and would love to replicate to even half of Xenos standard is how he achieves that amazing battle damage look?

"Taste. I must admit that I find it tricky to get just perfect. You have to make a decision and try it out. What I find annoying is that the process differs slightly on different kinds of surfaces and colors (light base color, dark base color, metallics and so on). In order to make good weathering you need to know all these different aspects and I still struggle with that. Doing test runs before committing to much effort to the cause has both saved and caused me a lot of headache...
A good way to know where to put the damage is to visualize the movement of the miniature in your mind and answer some questions to yourself in your minds eye:
- What parts of the miniature rub up against each other (pieces interacting equals more wear and tear)? Think elbows, thigh guards, kneepads.
- What parts are most likely to interact with the environment and the enemy (i.e. rub up against the environment and get struck)? Typically this would be feet, knees, hands/fingers, shoulder pad trims and so on.
- On what parts would flying dust/debris settle? Typically along the feet/lower legs. Moving
This also applies to vehicles but don't forget to consider the vehicles interaction with it's crew as well and not only it's interaction with the battle field and the enemy." 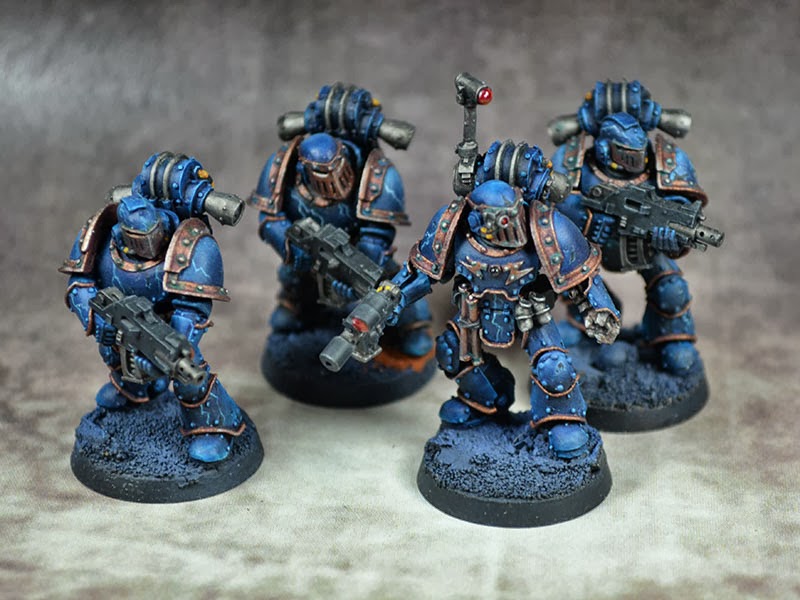 I then asked what Inspired his meticulous conversions?

"Most are created from ideas popping up in my head when I least expect it (much like my army projects in general - damn that imaginative mind of mine). I might have a unit I want to do for a specific list (like a Jump Pack Captain for example) and as I do other hobby related stuff my mind goes through different aspects and ideas and sometimes I just figure out a good base for it and work from there. Some of the latest Night Lords conversions I've been working on have been based on miniatures I've had duplicates of that I wanted to put into good use. So in a way most of my conversions are just something that grows on me and turn into something very different as I go along."

Knowing that all good things must come to an end, I asked Xeno where the line was for him with his collection, when will he stop?

"Well, as far as my Blood Angels Successors go they are put on hold indefinitely right now. I lost my steam for that project, maybe I've outgrown it for now, but I like keeping them around as a reminder of my origin. They where what got me into all the deeper aspects of the hobby and without them I wouldn't have learned all that I have and can now put to use in my other projects.

Since I prefer keeping all my projects in one log I'll most likely keep it going as long as I continue with the hobby. And who knows how long that will be? Right now I'm keeping my focus on a 30k Night Lords era army which is taking most of my time with a lot of conversions. I'm also in the middle of deciding about another 40k loyal power armour project that might make use of all the plastic miniatures that I was planning to put into my successor chapter earlier. So stay tuned for that experiment...
I don't think there is a definite stop for me. But since I'm reluctant to get rid of miniatures from my past it might become a storage issue that makes someone in my vicinity set the foot down." 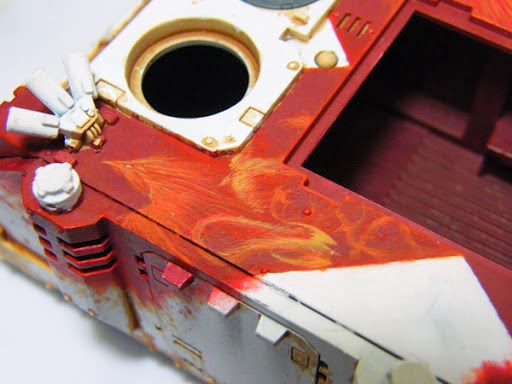 My final question was if Xeno had any tips on weathering in general for those of us aspiring to being able to paint to such a high standard?


"Use your smart phone. When you're out and about take pictures of dirty and damaged stuff. Containers, cars, beaten down buildings and so on. Use these pictures as references for your work with miniatures (mostly to get a sense of colours and interactions).

Then do some google searchers for weathering and see what other people have done and more specifically HOW they've done it. Search the forums and youTube for useful tips. If they haven't typed out how they've done it - ask them - most people in the hobby are happy to tell you what they've done even if only in a short point reference list.

I would also suggest getting the Forge World Imperial Armour Masterclass books or similar hobby books aimed at other scale model products. They contain a lot of useful advice and even though many of them might use colours that aren't drawn from the current citadel paint line the thought process is invaluable for aspiring painters and veterans alike. It also makes for good bathroom leisure...

Another useful advice is to write down what you've done and in which order. You might think you'll remember - but you wont. And having to redo the entire process just to get it right again is very annoying and ill spent time, trust me on this one.

Final tip - get good supplies. Good tools, good brushes, good pigments and so on. The most expensive ones aren't necessarily the best ones but it's well worth the investment to search around the internet for the products that have gotten the best reviews and put your well earned money into those products instead of crappy ones that ruin your miniatures. Also remember that safety is important. Working with solvents and aerosols are dangerous in the long run so make sure you get protective devices to minimize the risk for your health."

So there you have it, the first Promising Project Logs (or Promising PLogs), I'll be scouring the Internet to bring you some more breathtaking work for Novembers feature. Many thanks to Xenobiotic for taking the time out to answer my questions and we look forward to seeing more of his art - you can also check out his regular updates over at his Project Log Xenobiotics Project Log!