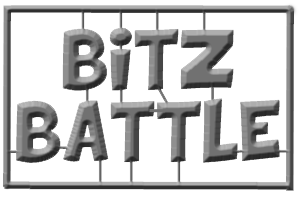 Want to learn a new fast game anyone with a Bitz Box and glue can play?


The premise is really simple, two players take their bitz box, a predetermined base size and build behind a screen for 10 minutes. When 10 minutes is up, the screen is removed revealing each players WYSIWYG WARRIOR and the BITZ BATTLE commences.

Each Bitz Battle is started with a verbal challenge often disguised in a standard conversation and preferably without pre planning.

Anyone that refuses a challenge becomes a pussy and loses by default. Pussies are to be ridiculed for preventing the course of fun. Victory and bragging rights are afforded to the challenger who instantly becomes the champion. Remember folks, you're only ever as good as your last game.

Only pussies bottle a challenge and you don't look like a pussy to me. So the challenge is accepted and its ON.

Anyone that witnesses or overhears a challenge can throw his polystyrene cement into the mixer by exclaiming "I'm in".  There's no upper player limit to a Bitz Battle Rumble. If 20 people call "I'm In" the game starts in 10 minutes with 22 Players.

World War Three was averted recently when Kim Jong-un called "I'm In" 10 seconds before he was scheduled to press the big red "I fucked up the world" button. He lost the battle and sobbed for a week - thus averting catastrophe and saving the world.

Sadly the winner was castrated.

Bitz Battle is fought with one figure each,  the base size isn't important but it shouldn't be bigger than 50mm across and should be agreed on between both parties.

When the challenge is accepted the competitors sit near one another either back to back or separated by a screen with their Bitz Boxes. A timer is set and each player has 10 minutes to create a WYSIWYG Warrior. It's important that you're within hearing and communication distance of your opponent as this is the perfect opportunity to employ devious psychological tactics. I've found comments like "this weapon is so big I'm gonna need more glue" or "I had no idea you could fit so much killy shit on a grot" are effective.

Cries of WAAAGH! are compulsory.  Even if you don't play Orks.


You're free to use any parts you wish, the more ludicrously pathetic the figure is the better. This game is about expression, fun and ramming a fistful of dice down your opponents throat whilst screaming "I'M THE FUCKING GREATEST SON!"


Each WYSIWYG Warrior must have :-

Each WYSIWYG Warrior begins the build phase with variable attachment points depending on the armor  worn by the base model. (the save of which it receives during the Bitz Battle)

If you decide to build your own armor with plasticard or kitbashed armor parts it counts as 4+ armor. (Prosthetic Balls)

You can spend attachments in the following ways.

All weapons must be represented on the figure by their actual in game counterpart. Counts as does not fly in Bitz Battle. There is no limit to how many weapons a fighter can hold other than those denoted by the attachment costs, you're welcome to tool your guy up with 6 additional ranged weapons and take to the battlefield with 7 boltguns if you can figure out how to build it. Or, maybe you want 3 lascannons and an extra BS?

Just remember, the stupider it looks the better it looks!!

All profile boosts must be represented on the figure in some way unless agreed otherwise beforehand.
No profile statistic can be increased more than once.

Be imaginative.
Special Rules
Weapon based special rules are applicable when using the weapon they come with.

Top Tip
Don't play Bitz Battle with any of the A-Team. You will lose and you will cry.

The big reveal is one of the most exciting parts of the game. Drum rolls are optional.

When the build phase time of 10 minutes is up both players "reveal" their WYSIWYG Warriors and share their profile and attachment choices.

Setting Up The Battlefield

A Bitzbox Battle is played on a 4 x 4 foot battlefield. Terrain is placed as per the standard 40k rules. It's often a good idea to build the terrain prior to the build phase - this gives each player a strategic overview and allows them to build according to the layout.


If you lose all 3 dice rolls it's your own fault. Practice more.

Players set up on opposite sides of the table no more than 12 inches from the table edge.

Deployment in a Rumble

Deployment in a Rumble is handled differently, each player takes it in turns positioning their WYSIWYG Warrior in the absolute center of the battlefield. He then scatters 6D6 in a Random Direction. If the dice roll takes the figure off of the board he is placed at the very edge of the table. The player may then deploy his WYSIWYG Warrior anywhere within 3 inches of the landing point. A Warrior cannot be placed in base contact with another players Warrior.

These Rumble Deployment phases can and often do leave fighters in incredibly close proximity.


Notes
This minigame is quite possibly broken and unbalanced. It is your responsibility to ensure you find a more broken combination than your opponent and proceed to crush him with it.


I will begin work on league and campaign rules only after feedback. If you have a game let me know how it went in the comments.