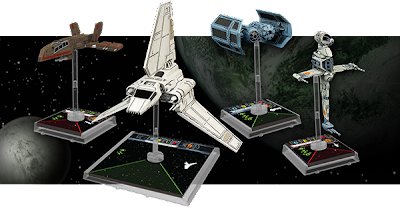 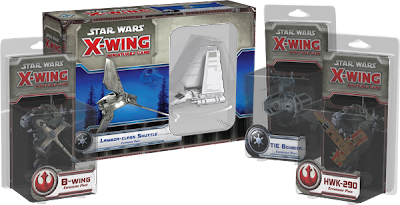 “Inform the commander that Lord Vader’s shuttle has arrived.”
–Star Wars: Return of the Jedi
Four new starship expansions have now arrived to forever redefine the dramatic space battles of X-Wing™!
The Lambda-class Shuttle, HWK-290, B-Wing, and TIE Bomber Expansion Packs each feature a detailed model, faithfully rendered at 1/270 scale, as well as a maneuver dial, and all the ship cards, upgrades, and tokens you need to make these starships a dynamic part of your X-Wing battles. Head to your local retailer today to pick up your copies. 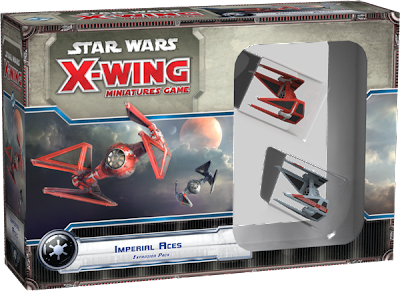 “There is a reason that Palpatine’s guard were called ‘the best of the best.’”
–Kir Kanos
Fantasy Flight Games is proud to announce the Imperial Aces Expansion Pack for X-Wing™!
Imperial Aces features two TIE interceptor miniatures with alternate paint schemes, several highly skilled new pilots, a dozen upgrade cards, and all the tokens and maneuver dials you need to field these ships. It also includes a new mission that allows the Empire to utilize new, experimental technology in a high-intensity clash with Rebel pilots.