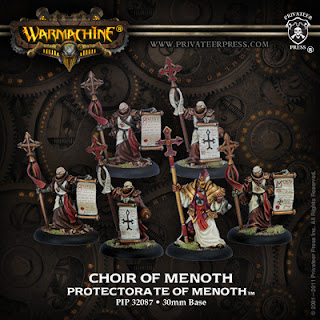 Menoth can be considered a Jack army among the options for Warmachine.   The reason for this is because of the amazing Jack support that Menoth has to utilize.   Top among these choices is the Choir of Menoth.   It is quite likely the best jack support option in the game.

The Choir of Menoth by itself is not going to win you any games.  They are DEF/ARM 12 models with a puny STR/MAT of 4 and a P+S staff of 6.   The staff does have reach but if you ever are relying on this to get those last few points of damage then your most likely going to lose that game.   These guys are more of a buff option for your Jacks and less a stand alone unit.

What makes this unit amazing is the Hymn ability.   This is a range 3 buff that has three options to it; Battle, Passage, and Shielding.

Battle: The targeted Jack +2 to attack and damage rolls for a turn.   This turns the majority of the Menoth jacks into effectivly MAT 8/ RAT 7 Jacks.  It also boosts the damage of all their attacks by 2, making the simple Crusader's mace a P+S of 20!  This is a huge boost to the jacks and with a average roll of 7 they will be hitting DEF 15 in melee and DEF 14 ranged.  This is amazing because it means Jacks are less Focus hungry.   They will be hitting more and doing more damage even unboosted.

Passage: The targeted Jack cannot be targeted by non-magical ranged attacks for a turn.  Menoth Jacks are slow, this allows them to get further up the board without taking damage that could reduce their effectiviness.   The more damage a Jack takes in the first turn or two the less effective it will be when it matters.   Denial of enemy attacks goes a long way towards winning games.

Shielding:  Enemy spells cannot target the Jack for a turn.  This can shut down a lot of the more nasty debuffs and attacks that enemy Warcasters like to throw at our Jacks.   With typically low DEF our Jacks will often be hit with things even unboosted.   This helps mitigate this issue by denying the direct target.

While these buffs are amazing there is some issues that need to be addressed while playing.   Only one of these buffs can be selected each time by a unit of Choir.  Each member of the unit can target a different Jack so you have plenty of coverage but all of them have to be the same buff.   The Jack can also only have one Hymn on it a turn so you cannot double up with another Choir unit.   This can be mitigated a tad bit if you want to spend the points and take advantage of the FA3 for the Choir.   Having a few of these units on the board will give you a bit more flexibility in terms of how your Jacks are buffed.  There is also the issue of positioning these guys to provide the buffs to your Jacks but not blocking off your charge lanes.   In order for the Jack to take advantage of the Battle Hymn you need to activate the Choir first.

Other issues to watch for is the fact that these guys are weak and therefore easy targets.   The enemy can use this weakness to splash AOE damage onto anything around them.   While your Jack may be immune to targeting due to a Hymn the Choir members are not.   The other weakness is magical ranged weapons.   They bypass the immunities of Passage and Shielding due to not being only magic or only ranged.

So as a recap of the pros and cons of the unit:


My recommendation is this be one of the first units you get after your initial battlebox purchase.   This unit makes Menoth Jacks amazing in terms of durability during the first few turns of advancement and in terms of damage capacity while in combat.   If you run melee jacks and hold a couple of ranged jacks back as support then consider purchasing at least one more unit of these guys.  This will allow you to support both ranged and melee Jacks, give the ranged Jacks Battle so that they can plug away at the enemy while the melee Jacks rush up the board under the protection of Passage/ Shielding.  Think ahead and plan for how you will advance your army so you do not trip yourself up with the movement of the Choir to maintain buffs.  Because they are small base units providing cover/ concealment of them should be a simple manner, just make sure you do not leave a opening for an enemy attack to abuse their weak DEF/ARM.  I have yet to regret a game where I bring them, and I often feel the lack of their utility in games that I do not field them.