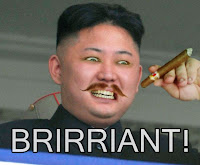 Today I want to talk table top strategy at its bare bones. The core components of your army, what its job is on the board and how will it execute that role. The idea of this article is it’s a generalist view that hopefully you can apply to your own Army and it’s something I apply to all of mine, once I’ve sorted out my list and I know how many elites or HQs I have – I then break my force down into the areas below before settling on what sort of job I’d like them to carry out.

Base of Fire/Fire Support

Dependent on your Army this could be a huge part of your overall force (Guard for example) or a small portion (Grey Knights). What we’re looking for here is either your 36-48” weapons or shorter-range heavy weapons carried by Relentless units, this part of your Armies job is simple – they will be firing whilst the rest of your force is moving to get in range for their weapons, they ensure that you have some sort of Threat on your enemies forces from Turn 1.

Again, this will either be big or small dependent on your army (gunline lists for example will have a small portion of assaulting forces). Here we want your units with some mid-field staying power, your rapid fire weapons are here. Your Assaulting Force needs purpose; every squad should have a pre-defined role before the game begins, ideally at your list planning stage as this will forge how you equip them, examples include:

Taking and holding ground: General all comers type load-out with a high model count, this squad will take key parts of the tabletop or objectives and sit on them – you want them difficult to move.

Home Scoring: This type of squad wants to be small and cheap; its job is to sit on low threat objectives such as ones in your own deployment zone. Add a special weapon or have them covered by elements of your Base of Fire to deter or defend against enemy Deep Strikers/Flankers.

If the Assaulting Force is your Anvil, Maneuver support is your Hammer. This is where your high mobility units live, so your Deep Strikers, Flankers, Tubo-Boosters etc. The ones whose job it is to take the fight to the enemy’s deployment zone or rapidly move to parts of the board to react to unexpected events. Here are your deep striking lances and meltas, your Terminators in Drop Pods etc.

Never leave home without them, these guys are your back up plan and will generally be quite small, a squad perhaps or some cheap bikes/cavalry/jump packs. This is the unit(s) you can commit to that extra objective you didn’t expect on the board, or to back up that badly ravaged squad sat on another objective etc.  They could be a small squad of Infantry, or some cheap rapid moving vehicles such as Jet Bikes or Land Speeders.


The Building Blocks in Action 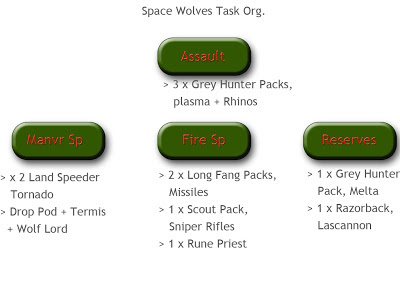 As you can see above I’ve wrote my list, decided what job each unit will do and how it’s synergy will play out on the board. Then I’ve assigned them into simple task groups. Now it’s flexible, if needs must then roles change however I haven’t said “right this squad is to kill those Terminators” – they’re simply organized into Doctrines, their employment within those doctrines is flexible and will evolve as the game progresses. From here I can assign each doctrine to its role when my opponent is infront of me with his army on the board.
If I place my units into this Task Organization format and I realize I’m thin on the ground with my Fire Support then I can re-assign other units that are suitable or I can go back to the drawing board and look at my list.

As always no plan survives first contact with rubbish dice or cheese lists, but following this format gives me structure to my Army, likely taskings are imagined in my head before game even begins and it ensures I never find myself without some sort of Reserve no matter how small. This thought process is best carried out once your list is written, it will help you find weaknesses in your list and let you test and adjust what you have put down on paper.
I hope you find this useful!