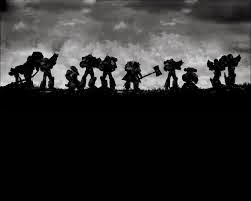 I've often considered putting the 4th edition Space Marines codex in a frame. Somewhere high up, with good lighting and angelic music playing. It was hardly the perfect book, arguably focussing too heavily on the Ultramarines in the army list to tie in with the box set for the edition, but what set it apart was the attitude of the chapter creation section.

Presented was a collection of divergences from the Codex, both positive and negative, to be combined into a personalised outlook on life in the 41st millennium for your collection of power-armoured killing machines. For many of us the opportunity to write our own fluff and put our own stamp on the history of 40k is one of the biggest attractions, so giving Space Marine players the chance to make our carefully crafted backstories have legal on-table impact was a great step in the right direction. Yes, it was open to cheddar-based messing around but it was a hopeful system and I got a lot of fun out of it. To those readers not present from 2005 to 2008, my condolences.
The divergence matrix died with 5th edition and was replaced by chapter tactics tied to special characters. Your Imperial Fists could still feel like the sons of Dorn but only with Lysander in charge, without whom they became just yellow Ultramarines again. Any successors of the first founding chapters (except the Crimson Fists) were again reduced to fielding Ultramarines in unusual colours or follow directly in the bootsteps of their parent chapter, led by Captain Larnath Bystander. In the grim darkness of the far future, vanilla was blue.
September has seen the arrival of the new codex, updated for 6th edition with new units and the latest iteration of chapter tactics. So, how close have we come to rediscovering the freedom of the old matrix?

The new system lets you choose between the six first founding chapters that don’t have their own codex, the Crimson Fists or the Black Templars. The rules provided for each give you two army-wide bonuses tied in with that chapter’s particular strengths. The only exception is the Ultramarines, who receive three army-wide bonuses which only last a turn each but provide better improvements for specific squads, allowing greater tactical versatility on the fly. These tactics are also now not obtained by having a special character as your warlord, but those characters do now have additional rules which buff your existing chapter tactics. So far, so good.

The tactics do tie in well with the ethos of each chapter. For example the Iron Hands are toughened by their augmentations, their vehicles regenerate and their techmarines are better mechanics as you would expect. While many players will still choose their chapter based solely on the advantages on the battlefield the new additions do go some way towards providing the same feeling that the old matrix did – that your stories made a difference in the game. Black Templars players may feel as though they have lost something by being included in the new codex, but I think that there’s still enough eau de Helbrecht there that your narratives can be as strong as any other chapter’s.

The main thing missing from these new tactics for me is the downside. No other army in the game specialises in one type of warfare without letting something else go by the wayside and Space Marine chapters should be no different. The old matrix forced you to choose suitable flaws for your chapter, magnifying the further from the Codex you strayed and restricting unit selection. These genetic and philosophical flaws are an integral part of the make-up of any chapter and can be seen throughout the literature, from the failings in the legions that drove the Horus Heresy to the Imperial Fists’ pointless determination at the Iron Cage, or the arrogance of the Astral Claws leading to Huron’s rise to power. Whether your chapter rails against their flaws, ignores them or allows them to define who they are, the darker half of codex divergence is an important factor that is ignored in the current edition. It could be argued that the positive bonuses provided in 6th edition do in themselves nudge you into restricting your own choices by preference, but personally I don’t think this goes far enough. Using Devastators because they perform better than your Vindicators is not the same as displaying an open distrust of the machine. That being said, I am aware that negative rules are the hardest to write and are the worst received by the community, so this may be erring on the side of caution from the writers.

Here’s where the real crux of the matter appears for me. The new codex encourages the use of chapters of your own devising and lists examples of successors, explaining that you should use the tactics of the parent chapter in question or whichever set best typifies your army. So, where does this leave us? If you want to play a first founding chapter or the Black Templars the established rules are provided, for better or worse. Crimson Fists players get a bit more flavour too. If you want to play a different successor chapter you’re left with two choices: consider your chapter to be identical to their founding fathers or try to claim that they have fallen so far from the tree that they now closely resemble a different first founding chapter. Alternative chapter tactics have been presented in Forge World’s Badab War Imperial Armours, but the validity of these rules is a touchy subject in the new edition and the rules are still tied to special characters. As we well know, all successors are distinct from their parent chapter in ethos as well as in heraldry, some more so than others. The Dark Hunters are not the White Scars and the Raptors are not the Raven Guard. The Genesis chapter pride themselves on their close links with the Ultramarines but they are an extreme example, just like the relationship between the Black Templars and Imperial Fists at the other end of the scale. This is, to my mind, the biggest failing of the new system compared to 4th edition.

While the new codex can be commended for bringing the other first founding chapters into the limelight and adding a bit more flavour to their successors in the text, there remains a critical lack of appreciation for these successors on the field. For example, the Aurora Chapter are known to specialise in armoured assaults and are successors of the Ultramarines. The chapter tactics available to them give no way to apply this narrative to the field, implying that despite using these tactics for most of the last ten thousand years they have learned nothing new relative to the bikers of the White Scars. However, the Aurora Chapter have not taken their love of armour far enough to have become the Iron Hands, remaining true sons of Ultramar. The middle ground is completely missing. In 4th edition, a trait could be taken to indicate this minor divergence at the cost of another, little used chapter of Guilliman’s book being left on the shelf.

Surely then this is the next missing step. The new edition allows Imperial Fists players to feel less like yellow Ultramarines, but provides nothing to make Invaders players feel less like green Imperial Fists. The 6th edition codex must be commended as a great step forward but has a long way to come, especially in terms of defining successors on the field. Games Workshop tells us that a thousand chapters exist at the end of M41, but also appear to maintain that they all follow one of ten archetypes to the letter. This needs to change. A passable solution was presented in 2005 and has since been ignored rather than improved upon. Increase the number of potential chapter tactics, reduce the impact of each and allow players to combine them in their own way with growing penalties for doing so the further they stray from the straight and narrow. Even if you have no interest in the narrative side of the game, it surely must be more fun to play someone with Chapter Tactics 1, 9, 8 and 14 rather than the same Blue Scars army. Until then I’ll be adjusting the façade around my 4th edition codex before sighing and bringing my grey, gold and white Imperial Fists back to the table.