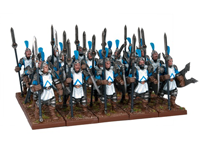 Greetings wargamers, Reaper here with the first in a series of new product reviews. First up we are going to be looking at the new Basilean Men at arms from +Mantic Games+.

So we’ll start some pictures of the sprues themselves. Not the best pictures, but they’ll give you a clear idea of what you get on the sprue. 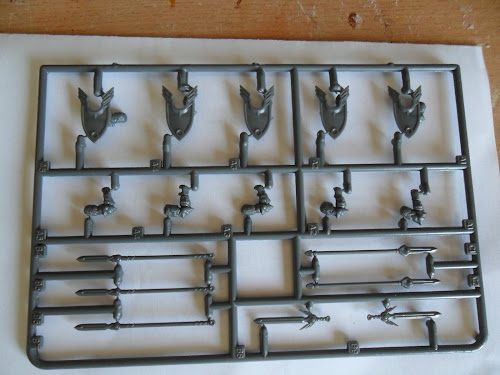 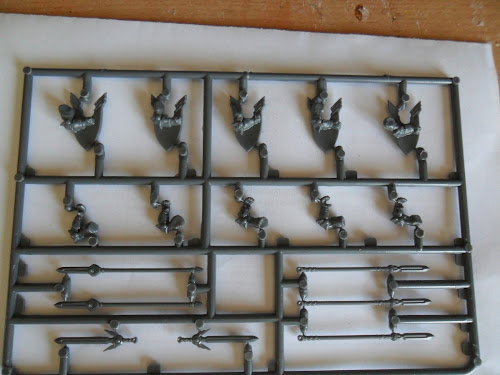 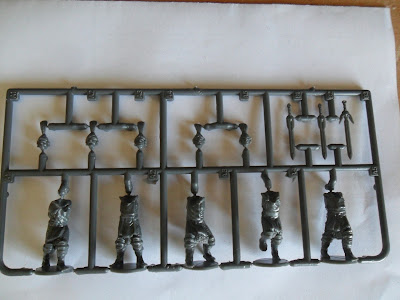 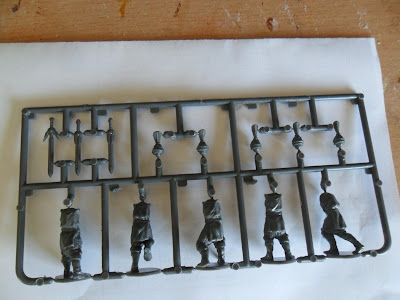 I’ll be breaking this review down into several sections; Character, Detail, Value, Quality and Service, with a final score at the end.


This kit does have a fair bit of character. The look of the minis is very similar to the concept art (by +Heath Foley+, which was excellent.)

Each weapon on the sprue has some sort of embellishment, all the shields have wings and the helmets have feathers on them. This helps tie them into the rest of the Basilean force.

Overall quite characterful minis that look the part of holy foot soldiers.

I would like to have seen some more iconography on the bodies themselves, but as these are also being marketed as generic fantasy humans also, I understand why there wasn't more.


Unfortunately the detail on these minis (or the ones I received at least) is very disappointing.

Some of you may remember when the mantic plastic goblins were released there was a complaint that the miniatures were soft and suffered from loss of detail and mold lines. This is supposedly because the mold was made by using the metal miniatures as a base, rather than making new minis.

Well, the men at arms suffer from almost all the same issues. As I understand it, the goblins and men at arms are made by a manufacturer in China. In my opinion, Mantic need to change supplier. Sooner rather than later.

I was very much looking forward to the men at arms (in fact they are the primary reason I spent so much money with the KoW kickstarter.) but when I saw the first actual pictures I didn't like the look of them and changed my order to include other things. And I'm glad I did.

The details on the men at arms are incredibly soft. The chain mail is soft and sloppy, the faces lack proper features and the armour is very soft. In fact, on one of the legs the transition from boot to armour is totally smooth and you can’t tell where one ends and the other begins.

To be fair, the weapons and shields (not the arms holding them) are very nice and I’ll be using them for other things, it’s just a shame that the rest of the kit couldn't be more like them.

I covered a lot about the actual quality of the casts in the previous section but I will say this, for what you’re actually getting (5 unique body, head and arm sets, 5 spears and 5 swords) I think mantic should have kept the Men at arms in their sprue-less plastic.

As far as I know, the original minis were sculpted by Remy Tremblay, who is one of my favourite sculptors. But then they were digitally scanned and alter with CAD software later. I've no doubt that if this kit was sprue-less plastic and had kept to Remy’s originals, it would have been a much better quality.


This set costs £14.99 for 20 men, which is very cheap. However, based on the detail and quality of the kit, I don’t think it’s worth it. I would much rather pay a little more and get a set of historical plastics to use as fantasy humans. For example, for just over £20 you can get a 24 man set of Fireforge’s templar infantry. This kit includes more options than you can shake a stick at and the detail is great. Certainly worth the extra money.

However, mantic’s service, as ever, was top notch. My package arrived quickly and they had no problems with the changes I made to my order nearly a year after the kickstarter.


So overall, this kit gets an 5.75, a disappointing result after the promise the initial concepts showed. However, I truly believe the problem lies with the manufacturer. Of course, mantic (in my opinion) probably should have done more to get a better quality cast when they saw the first test sprues, but they have been neck deep in 4 kickstarters since last year.

I believe this kit was their first foray into 3D sculpting (to a degree) so there was a learning curve. The 3D stuff we’ve seen for deadzone has look spectacular. I just hope they can work with the manufacturer to get a really good casting quality so the same thing doesn't happen again.

I’ll be back soon with a review of the Basilean Paladins, which I think look excellent.

Until then, what do you think about mantic’s latest plastic offering? Let us know below.