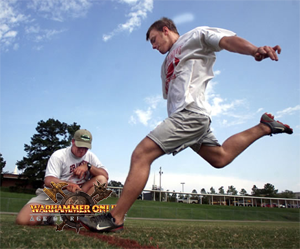 Warhammer Online's last 5 players were seen crying in the early hours of this morning when EA Mythic rang the overdue death knell for its struggling squirrel tail collector.


Earmarked the game to beat World of Warcraft (aren't they all) it seemed to be on the right track. As many as 3 players were spotted on a single server back in 2009, although reports have since alluded to the fact one was a Chinese gold farmer, one a hardcore fanboy and the other... well that was me. Cracking off to the hot wiggling ass witch elf blessing my screen.


Sadly, like the remnants of last nights Bhuna, this game is going down the pan. PLONK!

"Games Workshop has cultivated a world class IP. We were lucky enough to play in their universe for nearly a decade, with five great long years live. However, like all things--our contract has come to an end," Gouskos said.
"Both Games Workshop and Mythic agreed to part ways, despite how hard it is emotionally on us to let the game go," she added. "It has been a tremendous honor to work with Games Workshop and even though we may be parting ways, our relationship with them remains strong."


Translated as "Thank fuck that's over with". December it ends.

This quote here is incredibly frustrating to read and leaves me shaking my fist at the screen.

And in under a year we produced a spin-off product Wrath of Heroes, a MOBA-style game that used mostly Warhammer assets – which despite being a tremendous learning experience, never made it out of Beta. (THATS BECAUSE IT WAS SHIT!)


As a long time League of Legends addict I wish Warhammer would be turned into a proper "LoL/DotA" style MOBA game. We all know the IP is rich so it'd be amazing with heaps of options for "champions". Sadly we're getting a 40k mmorpg (bring it fanboys correct me if that isn't the 100% accurate terminology). 2 years max before that one dies.

Warhammer Battlefury the MOBA - you heard it here first. Make it happen GW.