My Thoughts on Codex Space Marines 2013 - The Son of Horus. 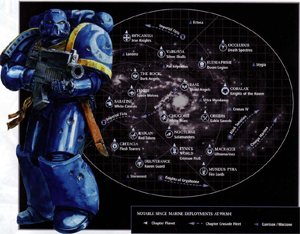 There are few times that herald greater change in the hobby for me than a release of Codex: Space Marines. As someone who has collected a complete Chapter, a new book means some changes at home. Revised army lists at every points level, re-arming of sergeants and Captains, and new goodies in the armoury.


The single biggest change is the inclusion of Chapter Tactics. For me, I have a choice between Ultramarines and Black Templars, as both equally well fit the background of my Chapter, the Lions Rampant. On one hand, I really like having the fluid, tactical flexibility that the three one-shot abilities the Ultramarines Chapter Tactics offer, while on the other, I often find myself hamstrung by a lack of psychic defense and greatly value Adamantium Will on all my units offered by the Black Templars rules. The nice thing about the Chapter Tactics rules is that if you have your own Chapter like I do, you can experiment with the different Chapter Tactics and figure out which one you like best for your Chapter, and run the exact same army list in the game-- none of the Chapter Tactics cost points, and the only things that change in the army list are access to Chapter-specific characters (and the Crusader Squad in the case of Black Templars).

So let's talk about new stuff, since for me, that's the bigger concern than the minutiae of points adjustments and optimal 1850-point builds. 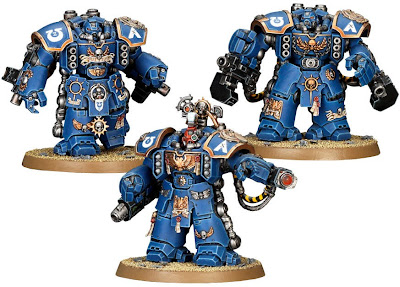 Personally, I think they're stupid. Conceptually, fluff-wise, and model-wise, they're dumb. So I've made the executive decision that the Lions Rampant won't have 'em in the armoury. What's the point? Space Marines shouldn't need something in between Terminators (who can carry heavy weapons) and Dreadnoughts. Game mechanics-wise, it gives Codex: Space Marine players something in between a Tau battlesuit and an Obliterator/Mutilator, though, and it's really hard to argue with that. I think Assault Centurions will suffer the same issue as Mutilators, in that you can bring a better assault unit for comparable points. A 5-man Terminator Assault Squad costs 10 points more base than a base Centurion squad. And after you give the Centurions any options, the cost of upgrading the Terminators to have hammers is offset. So the Assault Centurions may fall by the wayside simply for that reason. The Devastator Centurions, however, are mechanically quite solid, I think. A squad of three with lascannons and missile launchers and the ability to split fire is cheaper than a 10-man Devastator Squad with four lascannons. Since they're relentless (by virtue of Slow and Purposeful), they're able to be more mobile than a Devastator squad, to boot. They're vulnerable to anti-tank weapons, though-- they suffer the same issues Obliterators do, in that a stern gaze from a Predator will promptly eliminate the unit. If you can keep them in cover for the duration of the game and just use them as a heavy firebase unit though, they're really hard to turn down.

The Hunter & The Stalker


Unlike the Centurions, I think both the Hunter and the Stalker have an obvious place in the Chapter armoury. The Stalker seems to have a slight mechanical edge when you run the numbers, but I prefer the Hunter visually, and I like the idea of something that is able to potentially threaten the opponent even after it's been destroyed. Either way, both the Hunter and the Stalker provide a much-needed tool for getting rid of Vendettas, Doom Scythes, and Heldrakes-- the habitual causes of players groaning about flyers. At bargain prices points-wise, I can't find much I don't like about either vehicle. I do think the dinky little guns on the Stalker look a little silly, though. I would've preferred something more reminiscent of the Hydra on a Rhino chassis, I think.


I'm slowly warming up to grav weapons. My initial reaction was that there was no point in having them (in terms of game mechanics) if they were going to cost the same as a plasma gun and basically do the same thing at the end of the day. After really thinking about it, though, it provides an option for players looking to overcompensate against 2+ armor saves (I say overcompensate because bolters take care of the issue just fine) and players who are looking for a reliable fix for monstrous creatures, but don't ever use a plasma gun as a tactically flexible weapon otherwise. The plasma gun has the ability to threaten all but heavy vehicles, and still do its thing against Terminators and monstrous creatures. The tradeoff between the plasma gun and the grav gun is that the grav gun forfeits an element of tactical flexibility (the ability to seriously threaten a vehicle, even an AV10 one) with an extra shot and a slightly shorter range. Fair enough. In the grand scheme of things, I find the grav pistol and grav gun redundant to their plasma counterparts, and I see no real need to make any changes on my end to incorporate grav guns into my army lists. I'll probably issue some to some of my squads who currently have plasma guns in my collection, purely to fully incorporate the new weapon group into the collection... but that'll be about the extent of it.


I've been underwhelmed by the relics list in every Codex since Chaos Space Marines. At best, there's been one that gets played with by anybody, regardless of their interest as either a competitive gamer or a collector. I can honestly say that I can see playing with every single one of the Chapter Relics in the new book. My favorite by far, both flavor-wise, and gameplay wise, is definitely Teeth of Terra. It gives you an excuse to model an officer with a very flashy chainsword, which is not something anyone has ever done in recent memory; and it gives whoever's wielding the thing a device for clearing out both swathes of troops and provide a nasty surprise for any monstrous creatures who come nearby. I've been debating between running my usual Captain at 1850 points with the Teeth of Terra and a lightning claw or two lightning claws (as Teeth is a Specialist Weapon). The relic combination gives more attacks and the ability to threaten monstrous creatures (or work the same as dual claws) for a 20 point premium over the paired claws. Decisions, decisions...

The other awesome place for Teeth of Terra is on a Chaplain, in place of either his bolt pistol or his Crozius. I don't know about the rest of you, but I kind of miss the days of Chaplains being able to wade through Chaos Space Marines in close combat like it was nobody's business. The same could be said of the Burning Blade, I suppose, but the thing's just sort of generic feeling, I think-- it's a flaming power sword. That might burn you. Yay. It's AP2 and goes at initiative though, so it'll see use-- especially among Salamanders players who can re-roll failed saves from it if it bites the wielder, since it's a flaming attack.

As for the other relics, like I said, I think all of them are playable and very solid. The Armour Indomitus is a great way to fortify a Librarian in particular, since their defensive options are a little lackluster, and depending on what psychic powers he has, Relentless could be situationally useful. The Shield Eternal is sort of the same deal... although its provision of Eternal Warrior makes it an excellent pick for pretty much anyone who can take a Relic. It's a fair bit more than a regular storm shield, though, so if you don't need both Adamantium Will and Eternal Warrior on whoever's got it, you might want to just stick with the regular storm shield for them. I think I'd only give it to my Warlord, if I were to use it, since those defensive abilities are both great to have on someone who always counts for victory points, regardless of mission.

The Primarch's Wrath, the relic bolter, is simultaneously not that exciting and seems very playable. It's only 10 points more than a combi-weapon, and with four shots, AP4, and Shred, it's easily the best gun a character can take if you're going to go the non-pistol ranged weapon route for one. Honestly, I think it upstages Arrow of Dorn (Pedro Kantor's storm bolter)-- they're ultimately very similar, but I think Shred is better overall than rending.

The Son of Horus
By Unknown