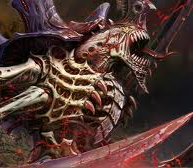 Some new information has come out, and some has been debunked, so let's see where the Tyranids now stand.

That's right, if you missed my post, there were several details regarding the Tyranid Prime that were fabricated, additionally all the rumors about the Crawling Plague are also false. I'm sorry for the errors, unfortunately they occur now and then when people intentionally kick out false information for a giggle.

Additionally, I'd like to apologize to anyone who saw the previous rumor set too early. I had made a small, but significant typo on there that had said the Hive Tyrant was getting "-1W". That was incorrect, it's rumored that he's getting "+1W". That was corrected, but I wanted to make sure people were aware of the correction.

As you read through this you'll see some things labeled "Zion's Speculation". These are just my little jabs at the rumor and me sharing my thoughts. They don't have any source, they're just my thoughts on what the rumor might be hinting at.

Lastly, the few updates are in green italics, just to make them stand out a little more amongst the wall of text. And as always, these are unverified rumors so take them with salt. I know that sentence is pretty redundant all the way through, but if it isn't said someone takes things as gospel and everything becomes a mess when it turns out something is wrong.

So enough of my chattin', let's look at the chitin!

Author: Phil Kelly? (was quoted as having said that he had ideas for the Tyranids back in 2012)
State: November 2013 or January 2014 (there is a lot of contention at the moment about this)

So not a lot of updates here. And I am aware that Bell of Lost Souls posted some information today, but I can't honestly use those rumors just yet due to them also using the name of the Hive Fleet that appeared in the faked rumors. Add in Tyranid Prime rumors that fit with the fake Prime rumors and at this time I can't honestly include them in the roll-ups.

Well that's it for me personally for the week kids. I'll be personally gone all weekend, but I'll be back to bring you more rumors on Monday!