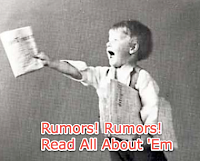 There has been some minor backlash at people who post rumors, so let's talk about that.

Recently we had a situation where we found out that two rumors that were making the rounds were fake. And this has prompted some criticism that I think should be addressed. So dig into some of what was said and see why it doesn't hold any water.


"People need to verify rumors before posting them."

I won't say this is bad idea, but I will say it's an incredibly naive one.

First, before I get too far into "why" we need to address something really quick. You see, a rumor is an unverified account of something. If we could verify these rumors we wouldn't report them as "rumors". I know it's splitting hairs, but I just wanted to get that out of the way. Rumors are unverified by their nature, it's just part of what they are.

That said, there is a more concrete reason why the verification idea doesn't work.

You see, there is no central rumor verification authority. We have no form of Associated Press, or a rumors version of Snopes, or generally any way of independently checking to see if rumors are "real".

That leaves us with two real options for "verifying" our sources: past history and other people with rumors.

Now the first is easy, as people post rumors, the more rumors we have the more we know about how accurate that person is. DakkaDakka uses this approach and it is incredibly useful...most of the time. The flaw in this approach is that some people are not true rumor sources, but instead have people relaying information to them. Natfka, for instance, uses this approach and has to maintain his own records of which rumor sources are actually accurate. It means that those of us who share rumors may be wrong more often than we like, but it's the most reasonable manner in which we can handle rumors.

Now this is another possibility: previously verified sources (through their past rumor track record) would fact-check rumors for us. This requires two things: first, they would need to have access to the information that would verify if the rumor in question was true or false. Secondly, we're asking people to basically act as a fact checking department, putting them in a position where we're demanding more of their time and energy, without any real compensation. And that's not fair to them.

This really just leaves us with the system we have now, were the rumors are presented as is, and as we learn more about the source's accuracy we're able to actually determine if the source is accurate or not and then determine if we should accept that source or not.

This one was kind of entertaining but at the same time it was a little baffling.

The reason I say this is because I don't know of a single place anyone can "research" rumors.

The only thing I can assume that they're trying to say is that those of us who post rumors should be looking online to see if it's posted somewhere as a joke, or was taken out of context.

However, this doesn't work 100% of the time. When rumors hit 4chan is a great example as the rumors will go away after a while. We also have issues where people don't quote their sources so finding the original source becomes problomatic. So sometimes we will be limited, but I agree we collectively should be trying to find the original source when we can.

Outside of that, there isn't a lot of research people can do, as if no one posts that their pulling people's legs we won't know.

Using the recent incident as an example, the post admitting to fabricating rumors didn't go up until after the roll-up of all the current rumors went up. If he'd never said anything we'd never known that the rumors had been faked until we had the codex in hand or another rumor source who could verify the information came out and said something. no amount of research by the people who post rumors would have solved this any quicker or any better. It can't happen that way.


"People shouldn't be rushing to get rumors out."

I'm not really sure what the definition of "rushing" is on this. I mainly do roll-ups so most of my rumor posts are behind the curve a bit, but they serve a different purpose and allow people to see the bigger picture instead of just the snippets of information that they'd have to assemble themselves. But my methods aside, what is rushing on these posts? 1 hour? 4 hours? 12 hours? A day? A week?

For argument's sake let's say it's a day. Let's say jumping on posting rumors within 24 hours of them breaking somewhere is "rushing".

Okay, why? We expect paid news agencies to provide us the latest news as quickly as possible. Paid agencies who have hired fact checkers, researchers, consultants and editors. Paid agencies who occasionally post news stories from the satrical "news" site, the Onion. Or from joke websites. Or get basic information or spelling wrong on a semi-regular basis in an attempt to try and meet our demands of current news.

We can't pretend the same sort of demand doesn't exist here for rumors. And frankly if big named news agencies can't even get it right 100% of the time, neither should those of us who try and share this stuff for free. Most of us don't do this for internet fame, or to try and make money off of it but because we find rumors interesting and we want to share them. We enjoy discussing them with others and like working out the puzzle with other people. We spend large amount of our own time digging up rumors because we enjoy doing it, not because of anything else. And frankly we aren't the ones you need to hold accountable when a rumor turns out to be a fake, or when you're upset about it.

First, the only people who should be held accountable for fake rumors are the ones who start them. They're misleading people for attention (as was the case back in 2011-2012 with Ghost21), or because they want to prove a point (the recent incident) or for the "lulz" (some of the people who troll people like Natfka or 4chan with fake rumors to stir up the hornet's nest). We, the people who share rumors with everyone else, do not have control over this. And if we're going to give everyone a fair chance to prove themselves we can't be asked to ignore a potentially good source just because they never posted anything before. Even the "big names" that used to post all the time, like Harry or Hastings, started somewhere and it's only fair we give that same chance to others as well.

Secondly, I want to make a point clear:

As I said earlier, rumors by their nature are unverified. Think of them as peeking at your birthday presents, but not being 100% of it being what you're really getting. If could be that really cool thing you wanted, or it could be a sweater from your grandmother in a box that just happens to look like the thing you really wanted. Rumor posters can't control this anymore than you can. If it turns out you're getting the sweater, then the blame shouldn't be falling on us for being willing to share things with you. We're stuck with the same sweater too, and we didn't even know it was coming either.

And honestly, if you can't handle disappointment in a mature manner and you feel that you need to attack the people who post rumors because you're not happy with the free information and time you're getting out of them, well you shouldn't really be reading rumors then should you? We all want the dessert rumors promise us, and none of use enjoy being slapped with liver paste in a tin instead. Attacking people who post rumors, or even trying to set up arbitrary guidelines that are impossible to truly follow won't change the fact that it's still liver paste, or that everyone, to include those of us who post rumors for people to read, are stuck with it.

So really to wrap things up, we put time and effort into what we do, do it at no cost to you and we're doing the best that we can. And that's all we can do. Fake rumors will still exist no matter how careful we are, mistranslations or misunderstandings will still occur, and sometimes GW will still throw a curveball or two and push out fake information just to throw a wrench in things. None of us can really do anything about it outside of continuing on and trying to do better next time. Arbitrary requirements won't fix that, and neither will people attacking the folks posting rumors for their convience.

Finally, the best tip I can give you is to treat all rumors with skepticism, both good any bad. You can even do what I do and treat all of them as entertaining ideas that are false until proven otherwise. Why am I such a pessimist about rumors despite enjoying digging through them so much? Honestly it's because I like to keep my expectations as low as possible so that I am much more rarely disappointed by the final result. It's a method that has paid off greatly since I adopted it and I recommend finding your own method, just not one where you're taking shots are rumor posters just because the news isn't too your liking, or some fake information slipped in and it made you upset. We do our best and really that's all anyone can do, especially with something as murky as the rumor mill.