EDITORIAL: Introduce your Children to the Hobby.

A few weeks ago my daughter had her 10th birthday.  She got some money and decided to add another Warcaster to her Khador army.  I can tell you now, nothing puts a smile on a gamer's face quicker than seeing their child walk up to the game store owner and ask if they can order Epic Butcher for them.

There are many reasons to include your children in the hobby.  On the flip side, there are several reasons you might not want to get them involved.   When I say the hobby I am not talking about just tabletop wargaming, but gaming in general.  This ranges from tabletop gaming, collectible card games and of course role playing games.   The benefits are very similar in each situation.  I started my child playing RGS when she was around 6 years of age.  I had a small game group playing Dungeons and Dragons and they were cool with adding her into the party.   With some thought, and input from my daughter, her first D&D character was born.   It was a half Gorgon/ Half Drow fighter with a sword that could shoot star shaped projectiles.   I purposely kept the character sheet simple, with a few skills and a basic health/damage setup.

She was an avid participant in each gaming session until her bedtime at which time the character would suddenly exit stage left in some comedic way.   It provided some basic fun to the game sessions and more importantly included my daughter in the game.  We did this for a few months until the end of that campaign session.   I was mildly worried about the response from her teacher when she started school back up because of my past experiences. 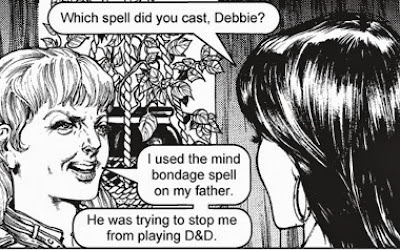 Ahh the wonders of Dark Dungeons.....

During the 80's D&D had a bad reputation as devil worshiping cult sessions among some groups of people.   I still laugh at the concern of my father when I started the hobby.  It was a group of neighborhood kids playing during lunchtime at the school but my father had heard stories about Dungeon Masters sacrificing their players to game gods and what not.  With this is mind I was curious as to how the news of my child playing would be received.   Much to my delight and surprise it turns out that the teacher was happy she was playing.  Her reasons, it builds critical thinking, creative thinking,  math and social skills for the children.  A large chunk of this is due to the rebranding of image that D&D has gone through since I started playing.  The game system has been cleansed of many of the things that caused uproar in terms of images and rules.   Other systems like Warhammer 40k has been having a similar trend of rebranding in recent years also.   A good example of this is the old sculpts of the Daemonettes of Slaanesh with exposed breasts vs the new covered versions.

Now that I have rambled for a bit I will get back to the main point of this article.   Including your children in your hobby.   The same benefits that my child's 1st grade teacher thinks D&D provides can also be applied to tabletop wargaming.  The game helps a child develop critical thinking, creative, math and social skills.  It also gives your something to bond with your child on a deeper level.   Having family paint night gives you time to sit and discuss how your child's life is going while painting.   There is the added bonus of helping hand eye coordination development which can be a challenge for some. 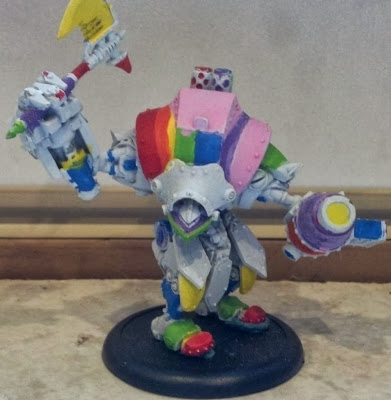 You also can get wonders of art like 'Starburst' here.

Gaming adds in another element of development in terms of critical thinking, math and social skills.   While gamers typically have a bad rap in terms of social development, this is something that is normally not the truth in reality.   Having your child in an active social environment while also thinking critically about what they are doing game wise helps build skills that will aid them in the future.   A lot of the high pressure situations of adult life are high pressure due to lack of experience.   Assessing a situation and planning in advance are the basic building blocks of success for a future management position.

While there are many perks to inclusion into the hobby there are also some pitfalls to be aware of.  The socially inept gamers do exist and can be an issue when dealing with children.   Being aware of who your child is playing and how they respond to others should be a concern for you.   Having your child bullied by a gamer is as bad or worse than what can happen to them in school.   When I suggest you include your child in the hobby I'm suggesting them being an active addition to your hobby experience.   Do not drop your child off at a store and forget about them for a few hours, be an active and supportive parent that is involved.  There can also be the cost factor of buying a second army.  You can mitigate this by having your children use your models but this means sharing your models.  The hobby is not a cheap one and buying for two people or more does not make it any cheaper.  Finally there is helping your child cope with losing a game or multiple games.   It is all fun and games when they win but if your child gets tabled multiple times you could be in for a long tear filled session of upset.   This can also be a perk of helping them learn to accept and cope with the losses that life can toss at them.

I will wind this article down now with a few closing remarks.   Do involve your child if they want to be involved.   Do not force them to do it though, nothing will lead to angry hate filled sessions more than forcing a child to do something they have no interest in.   If they do want to play, let them, encourage it and use it as a family building tool.   It can also be a motivator to encourage them to do things such as chores and schoolwork.   An occasional award of wargaming goodies to a child in the hobby is a solid way to earn brownie points with them.   Finally remember to have fun, it is what this whole hobby is about at it's core and adding family to it is a bonus.