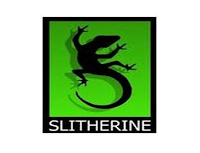 Hi everyone, first of all please accept my apology for not being able to make Games Day. I wanted to keep people updated with hourly pictures and intended to do just that, well right up to the point my mother in law decided to have her birthday today - inconsiderate cow!! So sadly all I'm going to do is post second hand imagery and hope it's sufficient.

I have two images that stand out massively, firstly some sneaky sleuth has snapped this one of Horus in a Forgeworld seminar. The photographer has more balls than a 12 gauge shotgun shell,  I can think of nothing worse than the humilation of being removed from a geek off for taking photos.

" 'scuse me lads, mind tilting your heads so I can get a better shot?" 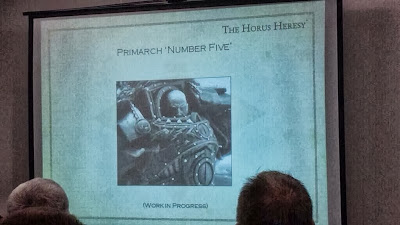 Apparently he'll be ready next spring so pencil that one in.

The second image that stood out of the dozens I'm going to post in the next update is this. A first look at the upcoming 40k video game from Slitherine Games. 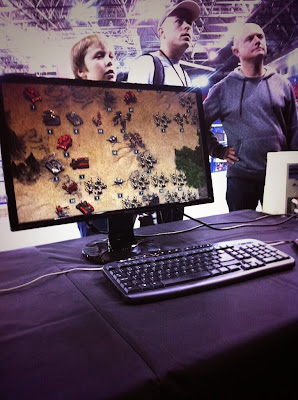 I know its only a small crappy photo but it looks pretty awesome so far so keep your fingers crossed and hopefully that trend will continue until its completion.