FAN FICTION: The One That Survived - Pt 3 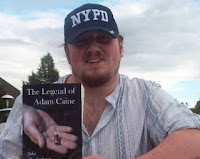 There were shouts of complaints and curses from the rescued non-coms when he declared his plan.
“You can’t be serious, Chief!” one sergeant complained.
“Deadly,” was his reply.
He grabbed the corpse, and ordered one of the others to pass him every single piece of explosive they could find.  He strapped the demo charges to the General’s chest, tucking them into what was left of his jacket.
“Pilot, turn this thing around, and take us up out of that hydraphant’s reach.  I’ve got an idea, and you’re not going to like it.”
“Since when do I ever, Fellheimer?” countered the pilot.
He finally allowed himself a small smile, dragging the corpse over to the rear door, and he steadied himself against the frame.  The view through the door blurred and lined for a few seconds, until they could see the monolithic Leviathan in the distance.
The ground rushed by underneath, and then disappeared itself, falling away until only dust could be seen, highlighted by the flashes of weapons fire beneath.  He didn’t register any screams over the engines, but they could all hear the vox, and how badly the regiments were being slaughtered down there.
There was no order to the retreat, no fighting, just running.
But if we could do what I hope will happen, things could change, he thought.
He wrapped the body with webbing and duct tape, and took a handful of the webbing, pulling the body up to waist height.  Fellheimer ignored the stares from the others, feeling their eyes on the back of his head.  His long hair whipped and thrashed behind him in the wind, and he felt the dust blast his face from the inverse wind created by the Valkyrie’s wake.
He kept his eyes on the dust below until he saw a familiar shape from a new angle.
Fear gripped his abused body as he looked upon the enemy.
The Hydraphant didn’t seem to be aware of them at first, concentrating on the ground troops.  When it seemed as though it had run out of targets, it heard or sensed the Valkyrie circling over it.
The fear speared him in the gut as the creature looked straight at him with its giant head, its mandibles stretching out to expose its fanged maw, itself big enough to swallow a Baneblade.  It roared, and turned its hunched bulk around, faster than Fellheimer thought possible for something of its size.
Its massive bio-weapon arms swung round with it, smoke, or something worse billowing from the organic barrels.
Fellheimer looked at the corpse of his prisoner.
You better do this for me, you old bastard.
The giant bio-weapons opened up, and the air was filled with screeching rounds that exploded in the air, banging the Valkyrie about as it tried to evade as best as the pilot could.  One near hit bounced the back of the craft up, and one of the Cadians tumbled out of the side door, screaming as he went.  Everyone else was gripping straps and seats tightly, their faces grim.
Fellheimer knew they wouldn’t last long.
With a grunt of strength, he levered the corpse out of the rear door, and watched his nemesis fall aimlessly towards the Hydraphant.
The Tyranid creature seemed to see what was falling, and manoeuvred itself until it fell into its titanic maw.
Fellheimer stared at the creature’s multiple eyes, wondering if it knew what was happening, or what was about to happen.  The creature roared at the sky in triumph, and its titan-killing weapons fired again, missing the transport.
Fellheimer cut a heroic figure, silhouetted in the doorway.
One of the Valhallans looked up at him, and saw the evil smile on his face.  And then he saw the detonator in his hand and the trigger button lit red under his thumb.
The explosion came from within.
The hydraphants, like many of the larger ‘nid creatures, were heavily armoured, more so than the Imperial counterparts.  Conventional destruction of the bio-titans was impossible without serious firepower only titans and super-heavy tanks could dish out.
But they were vulnerable from within.
The hydraphant’s head exploded, and its massive body dropped to the ground.  The impact shuddered the ground like an earthquake, and the Valkyrie felt like it had been kicked again.
Fellheimer stayed conscious long enough to see white hot beams of light flash down from the sky, an orbital bombardment that vaporised thousands of square acres of ground.  He could almost hear the collective shriek of the Hive Mind as it realised it had been beaten.
He fell backwards into the arms of the non-com survivors.

As Gauntlet retreated to the command Leviathan, the Army Group hit back.
Bolstered by the sight of the dead hydraphant beaten by a single Valkyrie, the Imperial Guard regiments turned and slaughtered the surviving ‘nid creatures, who were suddenly deprived of their now-vaporised synapse creatures sheltering under the titan.
The Army Group, led by Lieutenant-General Flacker, bit back, and what remained of the Imperial Guard were the first to expend their fear through rage, shooting even the confirmed dead creatures as they charged through.
Rhinos of the Falcons of Garm Space Marines chapter chased the Guard formations, joining in the slaughter.
Above it all, a single black Thunderhawk flew slowly over the battlefield, heading in the opposite direction.  It had no identification aside from a silver stylised ‘I’ on its side.

An old man stood over Fellheimer’s medical bed.
The flagship’s medicae staff were avoiding the old man, and the eight foot armoured giant stood behind him.  In fact, the small ward had been emptied besides the three figures.  Fellheimer was unconscious, unaware of his two guests.
“This puny Guardsman is the reason you came to this place?” the giant growled.  In all fairness to him, his voice always sounded like it was growling.  His black armour and silver pauldron and arm reflected the blinking lights of the instrumentation around them.  His other pauldron displayed the blue and white of an Ultramarine, the symbol obscured by purity seals.
The old man lifted a silvery eyebrow, glancing behind him.
“This ‘puny Guardsman’ has survived events even one of your ilk has to respect.”
There was a rumble of consent from the giant’s augmented throat.
“In his current condition he is of no use to us,” said the giant.
The old man idly played with the gnarled cane in his hands, the weight of the universe on his wizened shoulders.  He was deep in thought.
“He could be quite useful to us on the Octavius project,” he added.  “You’re right though, he is in no condition.”  He looked over at Fellheimer’s uniform, which had been cleaned and hung over the chair.  “Why do you hate the Imperial Guard so much, Brother-Captain?  Is it jealousy?”
There was a rumble of annoyance, and he could almost hear the argument about to come out of the giant’s mouth.  He interrupted his companion before he could make an angry retort.
“This man has survived unbelievable horrors with nothing more than a lasgun and some plates of carapace armour.  He hasn’t been genetically modified, he doesn’t have access to the absolute cream of Imperial armour or weapons.  All he has is his instincts and strength.  That’s why men like Fellheimer scare you.”
It was an old argument between the two, and the old man found himself drifting off into his memories, staring at the young man’s face.
“My lord?” the giant asked.  “Lord Inquisitor.”
“I can hear you, Brother-Captain.”
“Inquisitor Kryptman, we have to leave now to make it to the rendezvous for the Carpathia mission.”
Kryptman nodded.
“We must keep an eye on this young man’s progress.”
He followed the Deathwatch Space Marine Captain out of the infirmary.

The newly promoted Lord Militant General Flacker watched as the young Fellheimer got dressed into his clean uniform, slipping his armour plates over his torso and upper legs.  What was left of his lasgun had been sent to the enginseers to be repaired and sent to the armoury.  The young man had been unconscious for over a week, and was now ready and raring to get back into action.
He slipped the camo-cloak over his shoulders, cinching it together at the throat.  He slung the chainsword and scabbard over one shoulder, sliding his unloaded bolt pistol into its leather holster.
“Are you sure you should be up and about, Chief?”  Flacker asked; there was genuine concern on his aging face.  They had had a long and rather odd relationship over the years, going right back to the days when Flacker was his Colonel.  “I’m sure I heard the chief medicae say that you needed to stay in that bed for another week or more.”
Fellheimer winced as he moved, trying not to hold his side.
“I’m sure that was just a guideline, sir; you know how these medicae are –always exaggerating these things to scare patients.”
Flacker adjusted his new uniform, trying not to catch his hands on the gold braiding.  His medals, the majority forced on him, jingled as he moved.
Fellheimer limped towards the door.
“What’s my next assignment, sir?”
Flacker sighed.  They were about as close as their respective ranks allowed, and Flacker saw him as the greatest military asset in his arsenal.  The man was dangerous to a point where he could give the Officio Assassinorum a run for their money.
“The Army Group has been ordered away from the Carpathia sector, though the Inquisition has… requested that we engage a splinter fleet of Hive Fleet Leviathan.  Apparently the main thrust of the Hive Fleet is suddenly veering towards Ork-held space.”
“And me personally?”
“Get some rest; we won’t be there for another two weeks.”
Fellheimer grimaced, nodded, and was almost out of the ward’s doors when Flacker spoke up again.
“Why did you take that last assignment?  You could’ve turned it down, and I never would have reprimanded you; in fact, I almost hoped you wouldn’t take it.”
Fellheimer shrugged, his vest of carapace armour restricting the motion.
“I had to take it; nobody else would’ve been able to do it.  After all, he was my father.”
By Unknown