Home » 1 » Editorial » Fluff » RJSZero » Tau » EDITORIAL: Living by the Gulf – The Frontiers of the Tau Empire by RJSZero

EDITORIAL: Living by the Gulf – The Frontiers of the Tau Empire by RJSZero 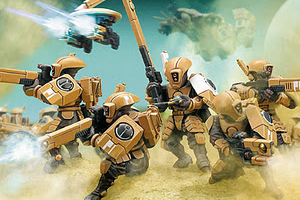 Personally, I don't believe that any 40k player is an intrinsically evil person. The Warhammer World ritual murder figures just don't bear that out. As such, I think most of us initially approach the narrative of 40k from a “good guys” standpoint with some of us then being drawn to the dark side. That process may be sped up with certain people but I honestly think that most chaos players became interested in power armour first, rather than being born with a need to add spikes to things. I've had my time with Chaos Marines, Dark Eldar and associated bad guys over the years and I've always been interested in the mechanics that drives the formation of these groups. We have a lot more detail about the intricacies of the fall of different Space Marine forces than with any other army but it never truly boils down to just “they be evil”. In my own experience coming up with believable reasons why an individual turns his back on his morals is a difficult but rewarding character study when done properly.

The Tau Empire has often been criticised for being too “nice”, a reputation that was central to the initial backstory of the faction but one that GW's writers have been working hard to rectify in recent years. We now have a much stronger sense of the historical inter-caste intolerance of the Tau people, replaced with outright racism and cultural imperialism under the Ethereals. The attitude of the ordinary tau citizen in the core septs is one of invulnerability, armed with absolute surety of purpose and confidence in their species. They are not only right, they are better than you as well. The other species within the empire are a mix of subjugated and willing allies, likely with variations between the two within societal groups. The Ethereals may be proficient demagogues but they do not appear to have the same innate control over their allies as they do the tau. We also have the growing emphasis on the Farsight Enclaves and their mysterious leader, with implications of possible daemonic interference and an interesting insight into a more brutal life without the Ethereal caste.

The latter point is of particular interest to me, despite a general feeling that Farsight has been poorly handled in previous editions. As a much younger gamer I wrote a homebrew codex as a counterpoint to Tau Empire, based on renegade Tau living on the edges of their former empire. The book was called Codex: Exiled Cadre and featured Fire Warrior Commanders on foot (honestly), Hard-Wired Weapons Links for giving your troops heavy weapons and knife-wielding pathfinder variants. It was a half-baked idea with a lot of silly features and an option to create lists intermediate between Exiled Cadre and Tau Empire, but I think the central premise is still quite interesting: what happens to a tau when you take away his imperial culture?

Lessons from the Enclaves

The key distinction at the formation of the Farsight Enclaves is the death of the expedition's Ethereals. Earlier fluff implied that Farsight might have murdered them himself and drew up links between the daemonic incursion on Arthas Moloch, the Dawn Blade and Farsight's rebellion. Fans of Warcraft should be able to get the rather blunt inferences there. However, the new supplement describes the sword as being dubious archaeotech rather than something in the style of the Laeran Blade, as well as blaming the Ethereals' deaths on “some infeasible force”. Farsight is now painted as a troubled revolutionary, leading his people the best he can now some veil has been lifted and Ethereal control (whatever that may involve) is gone. As far as causes go we know there’s nothing particularly special about the Damocles Gulf. The only remaining viable cause for his rebellion is simply physical displacement from the Ethereal caste. Farsight was headstrong and troublesome before the expedition but on Arthas Moloch he makes a sudden change from warmonger to independent colonist. Ethereals are spread throughout the empire but it seems that once a tau moves a certain (albeit large) distance from his nearest Ethereal the control begins to waver. This presents interesting situations as the empire expands.

The other main point brought up by Farsight is the way of war he practices. Vior’la tau are generally more fiery and aggressive but all tau are thought to consider close-quarters violence to be unsophisticated and distasteful. Across the Damocles gulf, however, we see experienced tau commanders picking up swords and hacking orcs to pieces with them. After the removal of the Ethereal caste from the Enclaves this practise spreads wider, with Crisis teams using energised blades as weapons as well as badges of honour. While this could be put down to a desire to be more like their commander it remains a radical cultural shift, like an English town deciding that only eating rats is exactly how a civilised society should behave. So, does this mean that when left to their own devices the Fire Caste prefer armour and blades over riflemen, or is this evidence of a culture with a pathological need to idolise something? Either way, we’re learning more. 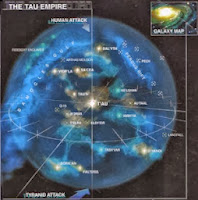 Tau society is driven onwards by their phases of expansion, with an individual’s life spent either fighting in one of these phases, consolidating from the last expansion or building for the next one. As the empire grows and establishes colonies further from T’au its resources become stretched, relying on further support from the core septs to hold what the expansion forces take. I think it’s reasonable to assume that one of these resources is manpower. Imagine then an isolated colony on the frontiers of the third phase of expansion. The war fleets arrive, find little opposition and plant their roots, then move on to more important matters. The colony becomes an afterthought, far away from the bright centre of the expansion and the forces of Aun’va and O’Shassera. War materiel is funnelled to the heart of the expansion with Ethereals marshaling the troops and ensuring everything runs smoothly.

Where does this leave our colony? Happy to play its part in the Greater Good. The authorities would likely be stressed and low on resources but determined to keep the growing community safe. The people assigned to this world would also likely be either junior personnel or out of favour, with the best and brightest fighting on the frontlines and establishing grand new strongholds. Now, let’s add in disgruntled human colonists, conquered by the tau and integrated into the new society. Many of them may have lost friends and family to the invaders and will likely not be the happy gue’vesa that their new overlords would like them to be. Quiet insurrections follow, putting further pressure on the administration. All the while the isolation from the focus of their empire continues to fray patience and test resolve.

Now we kill a high-ranking Ethereal, either by accident or by human-associated “accident”. Alternatively, couple a weaker leading ethereal with a more strong-willed commander. The veil begins to lift and even as the expansion proceeds further into the Imperium to the galactic west you have discontent brewing behind Tau lines. Colonies that are not quite as receptive to Ethereal inquisition as they once were. Smaller fleets going missing after Ethereal deaths, with private concerns coming to the fore the further they drift from the Empire. Commanders seeing Farsight’s example and starting to doubt in times of personal weakness. All of this has likely already happened. Essentially, think of Christian Bale in Equilibrium, with the Prozium drug representing the Ethereals.

Back To The Battlefield

Here we have the basis of a concept for a divergent or renegade Tau force, which I think is an interesting prospect for basing a collection on. How far you go with your differences from mainstream Empire armies is essentially up to you, but would largely be aesthetic. Your warriors would be downtrodden with poorly maintained gear due to the lack of regular centralised support, but with a fiery conviction in their newfound freedom. Armour would be grimy and hastily repaired. Battlesuits would likely be scare on the whole but treated like precious relics, larger variants even more so. I was discussing this with a friend earlier and we ended up designing a battered old Riptide suit, creaking around and spewing vapour but somehow always surviving to get the job done despite the gaping holes in its armour and the decades since its last proper service. I’ve been referring to it as Old One Optical System. This is also a great opportunity to include human auxiliaries into your army list as allies. Hardened guerrillas who kept their lasguns and flak jackets hidden for years and now fight valiantly alongside their former oppressors in search of a new destiny. Engineers patching up looted Imperial vehicles, painting new iconographies on the hulls and offering supporting fire to the one Hammerhead that still works. A Scout Sentinel repaired with battlesuit parts.

From a narrative standpoint, what would your faction think of Farsight? Is he a still a traitor or that guy who was right all along? Would they offer their services to the Imperium, fight in the shadows against the Ethereal caste or just go it alone? Is your faction commander a proud visionary or is he being pushed along by the men he leads? Regardless of why, throw off the shackles of weird non-psychic Ethereal rule and head out into the stars with your rubbish gear to cut the heads off some orks for a bit, because why not? The Tau are the galaxy’s vibrant upstart, so it’s about time they started being vibrant. Exile your cadre. Tau pirates all the way.