Sometimes fake rumors make their way into the mix.

Some of you remember the Tyranids rumor compilation that I posted a few days ago. Well it turns out that there was some information that had gotten mixed in there that was less than true.

In all honesty it was an outright fabrication. Here's the words straight from the horse's mouth on SomethingAwful (click for the full image): 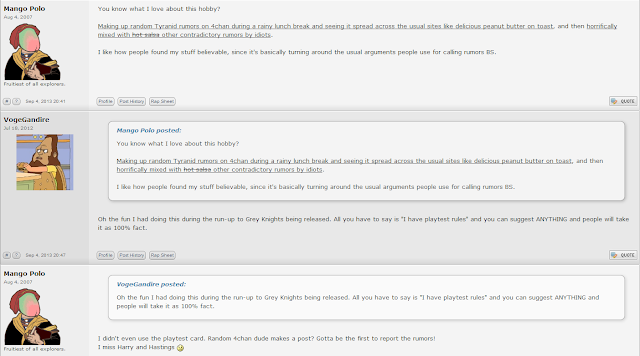 Now if you're wondering which rumors he's specifically talking about, he's referring to rumors about the Tyranid Prime and the Crawling Plague (the Venomthrope SC).

I'll get the corrections made for the next roll-up, but in the mean time I wanted to make sure that people knew that there were some intentional lies mixed into the rumors. Sadly this happens now and then with rumors and as long as there are people on the internet things like this will occur from time to time. We'll try to keep you abreast of them as their found though.