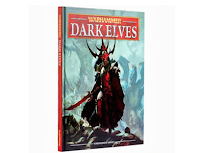 Aceldamor here and unless you’ve been living under a rock for the past month, you know about the Dark Elf releases that have been floating around the interwebs. With the pre-orders up on Friday, and the WD release today (Saturday) I was frothing at the mouth seeing the models again.


You see, I was fortunate enough to ponder pics of all the releases about a month ago, sometimes it pays to know people who know people. I poured all the info I could on my twitter account (@aceldamor) and let everyone know what was coming, and details of what I saw, though I couldn’t show the pictures.

I spoke to my tweeps about all the new kits, Warriors, Witch Elves (two kits), Cauldron (two kits), Hydra (two kits), Chariot, Executioners, Dark Riders (two kits), and Black Guard. I squeed when I saw the pre orders up, because I wanted to get my bid in on the new executioners…because DAMN! I eagerly scrolled down past the warriors, the cauldron, the hydra, the witch elves, Shadowblade and all the 1 click kits quickly, got to the bottom and realized….where the hell are the rest of the kits??? I figured “Well hell, I guess GW will be doing the standard 2 phase releases. I’ll just wait and drool over my White Dwarf at the new Executioners until I can get my grubby little hands on them.”

I got my White Dwarf in hand today, and again, poured through the whole magazine and just blinked a few times, as half of the releases were missing?!?!? Now I can think of a thousand times where GW split a release into two waves, but I CANNOT remember a time when they didn’t put all the releases into the White Dwarf. Is this a new strategy to sell more magazines? What logic is there to that? Why not showcase the entire range in its new glory to keep the public salivating for an extra month? I wanted pictures of my chariot, Executioners, Black Guard, and Dark Riders!!!

I would like to know the public’s thoughts on this. If they do publish Dark Elves part 2 in next month’s magazine would you buy it specifically for that? Would you rather have the entire range shown off in all of its majesty or split into two?