Iconic names like Goblin Green, Chaos Black, Scorpion Green... all gone. All the old paints, the ones I had spent 18 years memorizing where all replaced on a whim. OK, take deep breaths, you will just have to learn the new names or keep a chart around to tell you what they are no big deal right? Then the hammer blow of their sheer stupidity came to light.
Not only had they changed the colors names, quite a few of the older paints no longer matched the new paints. Many were either bluer then before, or contained more green.

So now everyone who had based their colors on Citadel paint had a chance of not being able to find a proper match meaning you would be stuck with armies of multiple shades. Mine was one of the affected colors. My entire army was based off of Hawk Turquoise and the junk they ended up putting out is way to green and much darker in shade to properly be used in my army. It's been a year now since the new paints were released by Games Workshop. I have heard many reasons why they did this, from Vallejo creeping in on their business to they just wanted to change who made their paints but to me no matter what the decision was based on it was sheer stupidity on their part.

I started painting back in 1996, back in the day of second edition Warhammer 40K. Back when things where simple and you only had to grab a brush, paint and slap them on a model. When you would open up the pages of White Dwarf and the 'Eavy Metal team was not much better then you where. Paints came in tall soft-sided hexagon bottles (made by Coat d'Arms) that sealed well and the paint went on nice and smooth. Thinning paint? What's that noise! A Pallet? I laugh at you! Nope things where simple back then. The worst thing you had to worry about was the hinge breaking on them, but damn it if I don't still have some of these laying around that are just like when I bought them. Those paints where great. You could open them easily, they sealed well, tended to not dry up and really did go on well with a minimal amount of thinning. 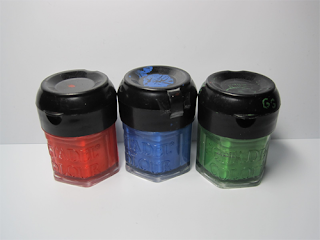 Then around 2000 Games Workshop did what I thought was going to be their dumbest mistake and switched to a different company to make their paints, but moving away from Coat D'Arms paints meant they lost a lot of great colors and their line of washes. Not only that but instead of getting 17.5ml per bottle you only had 12ml in the new bottle design. Speaking of bottle design, that was the absolute worst part of this. Anyone who painted during those years can tell you how bad it was. The lids would get stuck to the bottle and you would need a wrench to get them off, only to discover that all the paint inside was dried and junk. Then they almost redeemed themselves by keeping the bottle and switching to a flip top lid which solved a pretty decent number of the problems, though you now  had to work with the paints to get them to flow right. They seemed to have screwed the formula up and the paint was just thicker and much more difficult to work with. 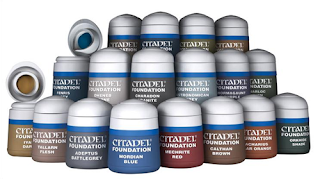 Then in 2008 Citadel released two new types of paints in a newly redesigned bottle, their Foundation and Washes. I was skeptical about them but found out that they were really good. Myself and many others were looking forward to the day when all the colors were brought out in the new jars, maybe with some new additions. Fortunately for us that day came in 2010 when all the paints came out. We had all the classics: Chaos Black, Boltgun Metal, Ultramarine Blue just in a new jar and honestly the paint seemed to work better, flowed easier off the brush and damn sure did not dry out as badly as the hard hex bottle paints did, screw top or flip top. After years of messing with things they finally came out with a set of paints that almost made me want to switch back to them. The bottles were well made, the new line of washes and foundation paints where actually quality stuff. Most of the paints went on really well, though there was an odd ball here and there you really had to mess with. But overall everything seemed to have worked itself out. 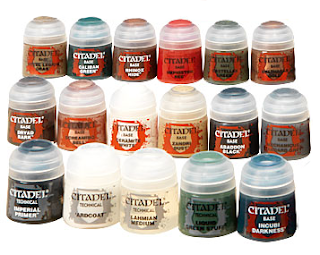 Then around 2012 they announced the new line of paints. Rumors where flying, adding tons of new colors, new types of paints coming and on and on. I was excited. I though GW was finally going to try and take on Vallejo in its color range, we were going to see new types of washes, more foundations! Well.... most of this was true, we did see these but in standard Games Workshop fashion they managed to absolutely and truely screw things up, and I thought the 2000 switch in paint bottle style was the worst they could do, boy I was wrong. I have already talked about how they changed every damn name and how the colors don't match. Now here is why I think Games Workshop shot themselves in the foot. Instead of simply adding colors in, more washes, foundations, maybe some metallics to augment that line, they change everything. Why the hell do people thinks it's a great idea to mess with things that are not broken. They could have easily just added in the new items like the shades, and highlights to the existing paint line and had a really kickass painting system going, but no they want to alienate older painters like myself.

What we were used to is all gone, and sadly it seems as if Games Workshop just wanted to clone what Privateer Press has done with their P3 paint lines as far as the names go, Calgar Blue.... what was wrong with just simple old Ultramarine Blue? Abbadon Black... why not just keep Chaos Black? Including army and character names in your paints does not make them easier to use or more appealing. OK maybe I am over reacting a bit about the name change, hell we all carry smartphones, it's easy enough to keep the conversion chart on there.

Here I've dropped the links below, these will save you time. Lots of time.

But then the stupidity kicked in. Who's dumb idea was it to change the colors of paints that have been around since the mid-90s? If GW was worried about other companies trying to steal their customers then this is the last thing they wanted to do. For people who use one of the changed colors you just handed them to your competition since now paints like P3 and Vallejo are the only paints we can use that match what we based our army in before. Or since I am forced to change colors I might as well switch to that airbrush color that is close to what I have but not quite.

In closing the new additions are nice, especially to the beginner painters since the new system is pretty much paint by colors but really GW did you need to redo everything? With many other companies out when they add colors, they do just that, they add colors. They don't go and change everything around. Business wise it was a bad move, hobby wise you just alienated your older fan base. All together the execution was just bad and this is why companies like Vallejo, Reaper, Privateer, Secret Weapons Miniatures etc keep taking more and more of the paint business. By my math we have about 1 or 2 more years until Games Workshop changes everything again and I dread to see how badly they can mess things up this time.

By Djinn24
By Unknown