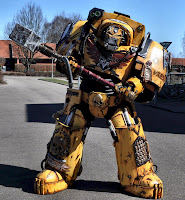 Have you ever seen a model released and simply thought "Hey, you know what? I would love to paint that" - even if the model wasn't for one of your existing Armies or even the game system you play?


That's what happened when I saw this guy released a year or two back: 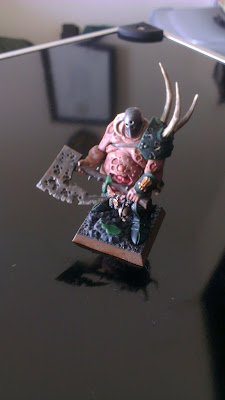 This is, as I'm sure you're aware a Champion of Nurgle from Warhammer Fantasy.

I remember seeing him in White Dwarf one month when he was released and just thought he'd be interesting to paint, so i picked him up and guess what? - He was!

I really enjoyed painting the lesions and his intestines dropping from his exposed stomach and the rusted blade was something I'd never tried before either. The end result was an interesting model that I was more than pleased with and since then he's pretty much just sat on a shelf.

I was then laying in bed the other day and thought "Imperial Fists are meant to be hard to paint, I wonder if I could do a decent job of one?" So I started to imagine how I could pose him, remembered I had a spare resin base laying around and the next day got stuck into him, the end result was this guy: 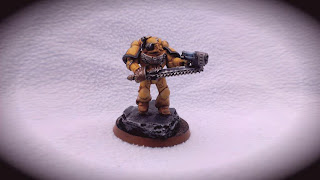 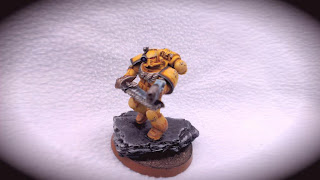 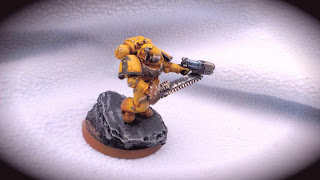 Okay not exactly 'Eavy Metal but I was happy with how he turned out and learnt a few lessons about painting bright colours. With a couple more test models I reckon I could get it to a standard I'm happy with.

A waste of money, time and effort that could have been invested into an existing army? Not for me, if anything these two guys were a welcome change to break up painting legions of grey Space Wolves I was working on at the time.

I've even wondered if, as I develop my understanding of painting Miniatures, that the same rules of highlights, light sources, and the same steady hand could be taken to painting on canvas to a reasonable standard.

Have you ever picked a model up just because you thought it was cool or for the painting challenge? Or do you have your eyes set on something at the moment? What about painting miniatures and painting on paper - are the two interchangeable disciplines? Let me know!